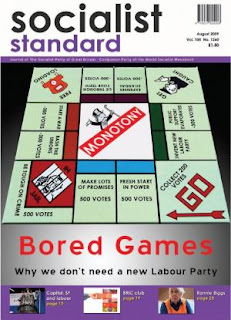 
The Labour Party has failed, so let’s start a new one. That’s what some trade unionists and leftwingers are saying. That would be to repeat a mistake.

The Labour Party was founded by the trade unions, supported by some political groups (Keir Hardie’s ILP, the Fabians), to be a group in parliament pressing for legislation favourable to trade unions and their members. Originally called the Labour Representation Committee, it became the Labour Party after the 1906 General Election when enough “Labour” MPs were elected to form a parliamentary group.

That wasn’t the only choice before the working class at the time. Socialists within the Marxist-influenced SDF proposed another way: that, instead of aiming at reforms of capitalism to be obtained by a pressure group in parliament, the working class should aim directly at obtaining socialism – the common ownership and democratic control of the means of production – as the only framework within which the problems they faced under capitalism could be effectively and lastingly dealt with. This was the policy advocated by those who broke away from the SDF in 1904 to set up us, the Socialist Party.

That was the choice: Labourism or Socialism? Unfortunately, most working class activists chose Labourism. In 1918 the Labour Party adopted a new constitution changing it from being a pressure group in parliament into a fully-fledged political party, with individual members. The declared aim was to eventually win a parliamentary majority and form a government that would gradually introduce socialism (actually, nationalisation or state capitalism, as set out in Clause IV of the constitution).

Labour in office
In the 1924 general election the Labour Party ended up with the most seats and the Liberal Party allowed a minority Labour government, under Ramsay MacDonald, to come into office. It lasted less than a year, but this was enough to show the ruling class that the Labour Party could be trusted to loyally manage the affairs of the British Empire. A second minority Labour government came into office in 1929 but was overwhelmed by the world slump that followed the Wall Street Crash and left office ignominiously in 1931, unable to stop unemployment growing (and proposing to cut unemployment benefit and civil service wages). Their leader MacDonald even went over to the Tories as Prime Minister in a Tory-dominated “National” government.

In 1945 Labour finally won a parliamentary majority. Clement Attlee took over from Churchill as Prime Minister. This time there were no excuses. The post-war Labour government did carry out a large part of the Labour Party’s reformist programme, nationalising coal, gas, electricity, water, rail, air and some road transport, and bringing in a national health service and a national unemployment, sickness and pensions scheme. This wasn’t socialism but it was a fairly radical reform of capitalism, even if motivated by the need to reconstruct British capitalism after the war as much as by a desire to improve working class conditions. At the same time the Attlee government presided over the development of the British A-bomb and got involved in war in Malaya and Korea. Despite the nationalisations and the reforms, in 1951 the electors voted Churchill and the Tories back. They stayed till 1964 when the Labour Party, under Harold Wilson, again obtained a parliamentary majority after what they called “thirteen wasted years”.

The 1964 Wilson Labour government was a complete failure. Economic circumstances made a mockery of their “national plan” to increase production smoothly and led to successive devaluations of the pound. In the end the government settled down to governing capitalism in the only way it can be: as a profit-making system in the interest of those who live off profits and against the interests of those who live off wages and salaries. Improved state benefits introduced in the first few months of the government were clawed back and “wage restraint”, even for a while a “wage freeze”, was imposed. A document In Place of Strife proposing to restrict trade union activity was drawn up. They didn’t have time to push it through but this was a factor in their losing the 1970 election.

Criticism confirmed
We in the Socialist Party pointed out our original criticism of Labourism had now been confirmed beyond doubt. It was not possible either to reform capitalism into socialism by means of a series of reforms enacted by parliament or to make capitalism work in the interest of the majority class of wage and salary earners. Instead of the Labour Party gradually changing capitalism, the opposite happened. Capitalism gradually changed the Labour Party into an ordinary alternative party taking its turn to manage the affairs of British capitalism.

But Labourist reformism was to have one more go at reforming capitalism. The Heath Tory government elected in 1970 proved a disaster, with double-digit inflation. In preparation for the coming general election, in 1973 the Labour Party adopted a policy document which spoke about a “fundamental and irreversible shift in the balance of power and wealth in favour of working people and their families”. Denis Healey, the shadow Chancellor of the Exchequer, hinted at squeezing the rich till the pips squeaked. Labour won the 1974 election, but the new Labour government (first under Wilson, then from 1976 under James Callaghan) proved unable, too, to control double-digit inflation. Instead of squeezing the rich, Healey, now the real Chancellor, had to go cap in hand to the IMF to get money just to keep normal government spending going. There were strings attached and it was low-paid public sector workers who were squeezed, leading to the winter of discontent of 1978/9. Labour lost the 1979 election. Margaret Thatcher took over and reversed most of the reforms that the Attlee government had introduced.

The Labour Party took some time to adjust to the new situation, even choosing for a while the leftwing journalist and orator, Michael Foot, as its leader. They lost the 1984, 1989 and 1992 general elections. Then came Blair. He realised that, unless the Labour Party abandoned the original Labourist project of trying to transform society by a series of nationalisations and reforms, it would never get back into office. Clause IV was accordingly abandoned. It worked. Labour – calling itself “New Labour” – won the 1997 election and again in 2001 and 2005.

The Blair Labour governments, however, were not like previous ones. They did not set out to reform capitalism to benefit workers and fail. They set out to simply manage capitalism for the capitalists and succeeded. It was plain for all to see that the Labour Party was no longer a “Labour” party, no longer a party committed to improving conditions for trade unionists and their members, but just another ordinary capitalist party like the Tories and the Liberals.

After a century of failure, Labourism no longer existed. The working class was back where it had been nearly a century previously: faced with the choice between two openly capitalist parties, not the Tories and the Liberals as then, but now the Tories and Labour.

Same choice
The same strategic choice now confronts the working class as it did in 1900. There are those who want to repeat the mistake that was then made and who want to form a new Labour party based on the trade unions. This is what Arthur Scargill tried to do with the “Socialist Labour Party” he set up in 1996. It’s what Militant, after being kicked out of the Labour Party, now propose with their campaign for a “New Workers Party”. It was what the SWP thought could happen with Respect and which George Galloway, who now controls it, perhaps still does. There is even an organisation called, again, the Labour Representation Committee.

But why? Surely one of the two main lessons of the 20th century has been that Labourism is a dead end (the other being that neither is state capitalist dictatorship as in former USSR a way to socialism). It can’t succeed. Not because its leaders are insincere or incompetent or corrupt or not resolute enough. It fails because it sets itself the impossible mission of trying to gradually reform capitalism into socialism. This can’t be done, as experience, not just theoretical understanding, has confirmed.

No doubt Scargill and the new Labour Representation Committee are sincere, though the same cannot be said of Militant or the SWP (they only want another mass party of Labour so they can infiltrate it and fish for members for their respective, and rival, vanguard parties).

But surely what is required is not a new Labour party but a party with socialism as its explicit aim and a policy of doing all it can to bring this into being. Since at the moment a majority still want or acquiesce in capitalism, in the immediate future this will have to involve campaigning for socialism, winning people over to socialism. Which is what we advocated in 1904 and what, in our small way, we have been doing ever since, despite the Labour road which most of the rest of the working class decided to take.

If the mistakes of the 20th century are not to be repeated this century the last thing that is needed today is a non-socialist, trade-union based “Labour” party. We’ve already been there, and it doesn’t work.
Adam Buick
Posted by Imposs1904 at 9:24 AM No comments:

Weekly Bulletin of The Socialist Party of Great Britain (106)

Welcome to the 106th of our weekly bulletins to keep you informed of changes at Socialist Party of Great Britain @ MySpace.

"...to my mind the unattractiveness of labour, which has been the necessary outcome of commercial industry, will have played a great part in this revolution; the price which commercialism will have to pay for depriving the worker of his share of art will be its own death." William Morris, Unattractive Labour, Commonweal, 1885.

Continuing luck with your MySpace adventures