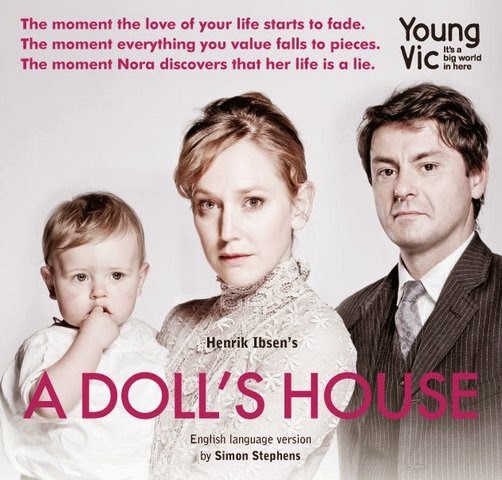 Feminist awakening
Hattie Morahan was effervescent as Nora Helmer in A Doll's House by Henrik Ibsen at the Young Vic last year.
Ibsen, the father of modernism brought a realism and naturalism to the theatre with A Doll's House (1879), and was an influence on George Bernard Shaw and Eugene O'Neill. Ibsen's play highlights the lack of women's freedom, and was critical of marital roles in middle bourgeois society. In the middle bourgeois class, hearth and home, domesticity, motherhood and wifely duty were sacred institutions.
A Doll's House depicts the feminist awakening (‘I'm a human being before anything else’) of Nora, a 'good' middle bourgeois wife of a lawyer, and a mother, who begins the play as a beguiling 'doll'. Nora ends the play as an emancipated 'Woman', literally flying the nest, abandoning her children, and her act of slamming the door as she leaves has come to represent the play itself. Ibsen commented that ‘a woman cannot be herself in modern society since it is an exclusively male society’.
Eleanor Marx was an admirer of A Doll's House, and played Nora in a 'private' performance in a Bloomsbury house in 1885 with Edward Aveling as Helmer and George Bernard Shaw as Krogstad. In 1886 she wrote the article The Woman Question where she identified that ‘the position of woman rests on an economic basis’ with ‘no solution in the present condition of society’ but in socialism ‘the woman will no longer be the man's slave but his equal’. Eleanor Marx quotes Ibsen as Helmer says to Nora ‘home life ceases to be free and beautiful directly its foundations are borrowing and debts’. In her 1891 article A Doll's House Repaired, Eleanor Marx satirises the English petty bourgeois reaction to the play and ‘repairs’ the last act in a parody ending.


Eleanor Marx criticised bourgeois women reformers who advocated palliative not remedial measures but in the early 20th century bourgeois women became prominent in the Suffragette movement which campaigned for middle bourgeois women to get the vote on an equal property qualification as men. The Socialist Standard in 1908 wrote that the Suffragettes, who were campaigning in practice for ‘votes for rich women, were ‘a bulwark of capitalism directly opposed to the interests of the working class’ and that ‘the salvation of working class women lies in the emancipation of their class from wage slavery’. The Suffragettes suspended their campaign in 1914 to support the Great War. In 1912 Rosa Luxemburg said the vote for proletarian women could ‘threaten the traditional institutions of class rule and advance and intensify the proletarian class struggle’.
Emma Goldman in her work The Significance of the Modern Drama of 1914 concluded about A Doll's House; ‘when Nora closes behind her the door of her doll's house, she opens wide the gate of life for women, and proclaims the revolutionary message that only perfect freedom and communion make a true bond between man and woman, meeting in the open, without lies, without shame, free from the bondage of duty’.