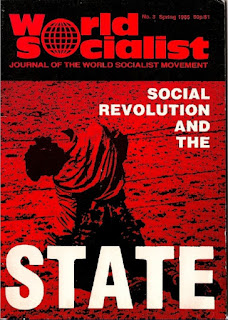 From the Spring 1985 issue of the World Socialist

You have entered a movie theater after the beginning of the story so you sit through the brief intermission between showings in order that you might piece together the parts. Ultimately, the tale begins to come together; you have now seen it all and the story is complete in your mind so, generally, you will turn to your companion and say: "This is where we came in, let's go."

Well, after observing US Presidential elections with varying degrees of comprehension since the race between Herbert Hoover and Al Smith back in 1928, this writer can certify that the sole reason he has been unable to walk out on any of them is that, short of marooning himself on an uncharted desert island, there has been nowhere that he could take himself to escape. One cannot turn it off - one can only suffer through the periodic re-runs. The only changes worth noting are the occasional substitutions.

After more than a half century of involvement to lesser or greater degree in the ranting, raving, fuming and spluttering that are seemingly the essence of the politics of American capitalism he can understand why it has been that such a large percentage of the eligible voting population - being unaware of any alternative type of political activity (the politics of revolutionary socialism) - have so frequently passed up the opportunity to cast a ballot. For whatever reason, the 1984 Presidential election in which the old-time Democratic approach as represented by Walter Mondale was ostensibly buried in a Reagan landslide victory (525 Electoral College votes to 13 - 49 out of 50 states) brought out an unusually high voter turnout - some '55%. Analysis of all of the results, however, indicates strongly that the gut feeling remains high that there is little, if any, difference between the "philosophy" of the contending Parties. How else can one explain the fact that the same voters who rejected the "liberal" Walter Mondale for the "right-wing" conservative Ronald Reagan denied the conservative Republican Party enough seats in the House of Representatives to afford them any sort of control in that important body? Indeed, the fact that voters seem traditionally to cross party lines in elections would seem to indicate that they perceive no important ideological differences among the parties of capitalism.

One all-important lesson to be learned from the 1984 election is the fact that, as President Reagan himself put it: "The people are in charge." And that explains why politicians of capitalism - even Ronald Reagan and his ilk - strive to keep their ears to the ground in order to detect majority attitudes that must determine their degree of liberalism or conservatism. The politicians with the keenest ears are the ones who usually win elections. It also explains why socialists maintain that once "the people" (a majority of whom constitute the working class) grasp the concept that enlightened self-interest determines a need for a sane, classless, social system, old-line politicians will either be compelled to go along with popular conception or be buried in a revolutionary political landslide.

STATE OF THE ECONOMY: A NON-ISSUE
But let us get down to brass tacks on at least some of the issues that have shaken up the American electorate in this year. Issues? You bet there were issue - a plethora of them. The propagandists of airwaves, press and pulpit have cajoled, scribbled, and thundered on the subjects of the national deficit and whether or not taxes will have to be raised in order to lower it; the right of the expectant mother to abort vs the right of the fetus to mature and be born; prayer in the schools vs separation of church and state; "star wars" in the skies (missiles that would be designed to destroy enemy missiles en route to us) and new, improved nuclear weapons as opposed to up-to-date conventional fire bombs and block-busters capable of inflicting mass murder and mayhem in a somewhat more confined area and with fewer potential side effects; women's rights and minority (ethnic) rights and so on and on. You name it - America's capitalist politicians have it; issues all based on the assumption that there is no other system of society possible than what is now extant in the world.

One of the main issues in the campaign was the state of the economy, but is this really a matter that should be of concern to the working class? To a limited extent, perhaps. In the sense that a healthy economy indicates a better opportunity for jobs it is, but in no way does that indicate that wage rates and living standards will necessarily be better for those who perform the jobs. In fact, in a significant number of cases workers with jobs are worse off than when they were unemployed since they will be cut off from welfare benefits that they may have had - services and other benefits that are frequently unaffordable on low and even on moderate salaried income.

The all-importnat fact to bear in mind, though, is that the economy of a nation is the business of the capitalist class or, in the case of "communist" dictatorships, of the state capitalist bureaucrats and other highly privileged strata of surplus value eaters. To put this matter in a homely and understandable way, a popular concept, even among radicals, is a huge pie which represents the sum total of a nation's production. The working class, according to this philosophy, receives for its share a relatively small segment of the pie because, being compelled to live on wages, workers can only buy back the equivalent of their pay in tangible goods and services. But upon reflection, this just does not make sense because it would seem to be in the capitalists' interests to force increases of pay on their employees, thereby enabling them to buy more and increasing the total of production and profits.

Of course the constant pressure is entirely different: rather than increased production via higher wages the eternal outcry is for increased productivity and lower wage costs. Since labor power is a commodity, what increased productivity means to the worker is that he is required to give more of his commodity without a corresponding increase in pay. It also means that his life-store of commodity labor power is used up at a younger age and anyone who believes that old saw: "hard work never hurt anybody" should look more closely at the condition of the working class.

The workers do not share the "pie" that they produce. They have been paid in wages/salaries, and whatever the amenities that have been granted - grudgingly or otherwise - to "bake" it and the whole damed shell, with all of the fillings, is the property of the capitalist class. Ironically, they have been paid out of previously produced capital which is the fruit of their previous toil. In other words, they must even produce the wages that the capitalists pay them: a con game (albeit and honorable) if ever there was one.

So the lesson that workers must learn is simple enough. As long as capitalism exists they must resign themselves to the indignity of exploitation. But they are not compelled to swallow the cock-and-bull story that makes of them "partners" in capitalism's industries, in capitalism's economy.

THE PARTIES OF AMERICAN CAPITALISM
One of the more exasperating responses a socialist can get to his pitch for a sane society goes something like this: "Of course, I agree with you that capitalism has outlived its usefulness, is a menace to the very existence of our planet, and should be abolished lock, stock and barrel - and the sooner the better. But you know as well as I that the working class is not ripe for such action so, in the meantime, I am going to vote for the lesser of two evils. Walter Mondale (or whomever) would be better as President than Ronald Reagan (or whomever) . . . "

Most of those who make such a choice seem not to realize the significance of their action: they are avowing their perception of which party best serves the interests of American capitalism. And the truth is that when one gets down to the kernel of what the politicians of both sides have to say, and their published platforms, the difference between them is akin to the difference between two rotten eggs, one prepared "sunnyside up", the other flipped. Strong condiments might disguise the odor and even the flavor but the effect on one's gastro-intestinal system would be similar if not identical.

So true is this, in fact, that we have the spectacle of President Reagan, Vice-President Bush and others of the Republican Party extolling the virtues of those late Democratic Party heroes - Franklin D. Roosevelt, Harry S. Truman, and John F. Kennedy, to the dismay and horror of the Democrats. When these Republican orators are called to task for it by Democratic bigwigs, they reply, simply, that the present Democratic Party has abandoned the tenets and principles of their forebears.

If Reagan is allegedly trying his best to manipulate US into a war in Central America, didn't F.D. Roosevelt allegedly manipulate Japan into making the first military strike at US back in 1941? And if Reagan's foreign policies threaten a drift toward nuclear war, how about Roosevelt, Truman, and the A-bombs dropped on Japanese cities during WWII? Or Truman with his Korean "Police Action"? Bringing it a bit closer to our present times, how about Kennedy all but scaring the wits out of the world with that Cuban missile crisis? And all of those Democratic Party heroes and their pursuance of the Vietnamese War?

Even on the domestic front Reagan can look back admiringly to actions by those Democratic Party knights-in-armor. If he (President Reagan) busted the Air Controller's Union and fired the entire membership for striking against the Government, didn't F.D.R. federalize the National Guard to break a strike against North American Aircraft in Los Angeles shortly before America entered WWII? And a number of years prior he had informed Works Project Administration (WPA) workers that "You can't strike against the government." And didn't Harry S. Truman use Federal troops to break a railroad strike after the War? The list that justifies Reagan's extolling those great Democratic Party Presidents is long. So what are the leaders of the Democratic Party beefing about?

LAME DUCK REAGAN
Finally, if there have been cuts in social welfare programs under Reagan - which there have been - they were not accomplished against Democratic Party opposition. There was some compromise on the degree but there was definite collaboration between the parties. There is no such thing in America's political machinery of government as a President with anything approaching dictatorial powers. Nor, for that matter, are either of the two political parties in control of US capitalism monolithic in make-up. The Democratic Party has a bloc of Southerners, known as "Boll Weevils" who frequently will unite with conservative Republicans on critical votes while within the Republican Party there are always a number of "moderate" and liberal types who will support the "liberal" Democrats to the discomfiture of their fellow Republicans of conservative bent.

An all-out Donnybrook is expected to materialize before the 1988 Presidential elections in both parties between "liberals" and "conservatives" for control and the opportunity to capture the White House. For this Presidential Follies of 1984 has been Ronald Reagan's  "Last Hurrah." He is now - in the parlance of American political English - a Lame Duck.