From the January 1933 issue of the Socialist Standard

A debate was held between the S.P.G.B. and the I.L.P. at Bethnal Green Town Hall on Friday, December 2nd. The I.L.P. speaker, N. Dunbar, claimed that the revolutionary ferment among the workers since the Bolshevik seizure of power has completely changed the problem of overthrowing capitalism. The workers have made inroads into capitalism by such achievements as unemployment insurance, and that the I.L.P. policy of Workers' Councils is the road by which the workers will achieve Socialism. The present I.L.P., since the Bradford Conference early this year, is a fundamentally different body from the old I.L.P., and must not be held responsible for its predecessor's actions.

Comrade Hardy, for the S.P.G.B., denied that the problem is essentially different from what it was before the war.

To get Socialism, the workers must gain control of the political machinery, yet the General Election last year showed the workers, employed and unemployed, prepared to vote the capitalists into power. Russia is not an instance of Socialism but of state capitalism, and in any event the I.L.P. cannot claim any credit for what the Bolsheviks did. In 1917, when Kerensky was in power and oppressing the Bolsheviks, the leaders of the I.L.P. sent this capitalist government a telegram of congratulation, urging the Russians, subject to certain conditions, to continue the war. (See Labour Leader, May 3rd, 1917.)

Social reforms like unemployment insurance, are methods by which the capitalists buy off working class discontent, with the result that unemployed riots are far less formidable than they were before the War.

The I.L.P., right from it formation, entered into electoral arrangements with the Liberal Party and had never fought elections on the simple demand for Socialism. The new I.L.P. is just like the old, a reformist body. The claim that the I.L.P. stands for any definite policy, cannot be maintained. The New Leader, for weeks past, has been publishing letters from influential I.L.P. members disputing with each other as to what the I.L.P.'s policy is?

The debate was well attended and both speakers obtained a good hearing from the audience, many of whom appeared to have Communist sympathies.

The S.P.G.B. versus the Co-operative Guild
A debate was held on Tuesday, November 15th, at Sutton, Surrey, between Comrade Ginsberg, representing the S.P.G.B., and Mr. Atkins, representing the Sutton Branch of the National Guild of Co-operators. The audience was small but interested and attentive.
A.F.
Posted by Imposs1904 at 11:47 PM No comments:

From the October 1961 issue of the Socialist Standard

From his law of population, Malthus infers that Governments should, on the one hand, remove all obstacles to the cultivation of the soil and, on the other, favour preventative checks, especially the postponement of marriage. The following passage from the 1803 edition is interesting: "A man born into a world already possessed, if he cannot get subsistence from his parents on whom he has a just demand, and if society do not want his labour, has no claim of right to the smallest portion of food, and in fact has no right to be where he is. At nature's mighty feast, there is no vacant cover for him. She tells him to begone and will quickly execute her own orders if he does not work upon the compassion of her guests."

Malthus therefore recommends the reduction of paupers' relief to a minimum. Money used to support the poor or destitute, he argues, us taken from the other classes in society, and especially from that section of the working class that is only just outside of destitution. For this poor relief, says Malthus, increases demand, and thus raises the price of food, clothing and shelter.

Malthus' main demand is for "moral restraint." He writes: "It is clearly the duty of each individual not to marry till he has the prospect of supporting his children: but it is at the same time to be wished that he should retain undiminished his desire of marriage, in order that he may exert himself to realise this prospect, and be stimulated to make provision for the support of greater numbers."

Arising from this, it was proposed to put legal difficulties in the way of marriage. The poor who had no prospects of being able to support a family were to be forbidden to marry.

The Malthusian doctrine attracted widespread attention, and was accepted almost without qualification by many scientists. It also made a strong impression on governments, and its effects were seen in the increased stringency of the marriage laws. Down to 1918 vestiges of this persisted in Bavaria and the Austrian Tyrol, where marriage could not be entered into without the permission of the commune.

The astonishing fact about the Malthusian theory is its persistence in face of evidence that confutes it. To go to the core of the question, we can say there is no evidence to warrant the assumption that there is any tendency in population to increase faster than subsistence. The facts stated by Malthus to show this tendency, simply show that where, owing to a small population in a new country. or where, owing to the unequal distribution of wealth, as among the working class in the old country, human life is occupied with physical necessity of existence, the tendency to reproduce is at a rate which, if unchecked, would at some time exceed subsistence. But it is not correct to infer from this that the tendency to reproduce would show itself to the same extent where population was sufficiently dense, and where wealth was distributed in such a way as to lift the whole community above the necessity of devoting their energies to a struggle for mere existence. Nor can it be assumed that the tendency to reproduce, by causing poverty, must prevent the existence of such a community: for this obviously would be assuming the very point at issue and be reasoning in a circle. And even if it be admitted that the tendency to multiply must ultimately cause poverty, it cannot be stated of existing that it is due to this cause until it is shown that there are no other causes which can account for it.

The Malthus theory has persisted, and will persist, because it does not in any way oppose or antagonise any powerful interest. It is soothing and reassuring to the class who, wielding the power of wealth, largely dominate thought. Indeed, at a time when men were beginning to question an examine society, it came to the aid of the ruling class. The Essay on Population was written as an answer to William Godwin's Inquiry concerning Political Justice, a book which dealt with the principle of human equality, and the effect of Malthus' book was to justify the existing inequality by shifting responsibility for it from the laws of society to some kind of God-given laws.

The Socialist of today still has to contend with Malthusian ideas, in a modern form. They become more prevalent in times of large-scale unemployment, and are also use as an excuse to justify poverty in such places as India, Africa, the Latin countries of America. The answer to Malthus, and the modern exponents of his teachings, is to be found in the method of ownership of the means of producing wealth.

Poverty, as dealt with by Malthus, is not in fact the result  of excessive breeding. It is the chaotic nature of the capitalist system which must be blamed. Its solution is obvious—remove the cause which the Socialist claims is the private property relation in the means of production. Make this property common property, and the common access to wealth which follows such a change will provide the answer to poverty, present or future. 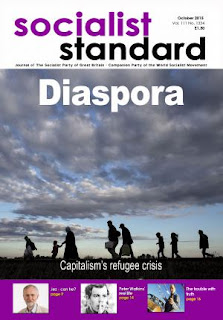 From the October 2015 issue of the Socialist Standard
Letter sent to the Calcutta paper The Statesman.
In the evening of August 23 in the Sunday Discussion Meeting of our party, the World Socialist Party (India), we read with interest the Saturday Statesman, August 22, article ‘Relevance of Marx’ written by Professor Gargi Sengupta (see here). It is really heartening to note that a nineteenth century communist revolutionary, Karl Marx, is being revisited by the 21st century mainstream press to find answers to the present-day woes and worries. Hopefully, this signals the beginning of Marx’s media-ride in India too.
This happens because, as Marx and Engels themselves observed, ‘consciousness can sometimes appear further advanced than the contemporary empirical conditions, so that in the struggles of a later epoch one can refer to earlier theoreticians as authorities’ (The German Ideology). ‘Men make their own history, but they do not make it just as they please; they do not make it under circumstances chosen by themselves, but under circumstances directly encountered, given and transmitted from the past’ wrote Marx in The Eighteenth Brumaire of Louis Bonaparte.
In her appreciation in defence of Marx, Gargi Sengupta has rightly claimed that ‘Marxism enables us to understand the nature of the capitalist crisis,’ and also that ‘Marx believed that human development requires a cooperative society based on common ownership of the means of production.’
She has excellently pronounced, ‘The overall significance of religion may have declined, but the family, the schools, and the capitalist controlled mass media continue to brainwash the working class and prevent them from realizing their true destiny’.
Her observation: ‘From a global perspective, a class-based analysis is still relevant,’ holds up one of the basic principles of Marxism. She defends Marx for ‘making a very fundamental contribution’ whereby ‘He placed human beings and their conscious, purposive activity – human labour – at the centre of his analysis’ and also for a ‘unique contribution’ – the role of ‘class struggle’ in ‘human historical development’. She is right in pointing out that ‘Marx’s writings still evoke interest across the world. … Marx’s writings can throw light on the problems of our age’. Simply because, as Marx viewed, ‘The nature of capital remains the same in its developed as in its undeveloped form’; and ‘Production of surplus value is the absolute law of this mode of production’(Capital, Volume I).
Actually, Marx is more relevant today than ever before.
This said, I would like to comment on a couple of inaccuracies in Professor Sengupta's article. She says, ’Marx visualized the remedy in violent revolution followed by decades of civil and international warfare.’ This is a half-truth. True, in his early years Marx held a ’violent revolution’ view. However, eventually and finally he arrived at the following conclusion: ‘Proletariat – organized in a separate political party. That such organization must be pursued by all the means which the proletariat has at its disposal, including universal suffrage, thus transformed from the instrument of trickery, which it has been up till now into an instrument of emancipation’ (written on about May 10, 1880, printed according to L'Egalité, no. 24, June 30, 1880, checked with the text of Le Précurseur).
Secondly, in portraying capitalism as only a ‘private enterprise’ system she has missed the yardstick of defining state capitalism – the defining characteristic of which is state ownership and control of the means of production and articles for distribution. As a result she is mistaken in recognizing the erstwhile so-called ‘communist’ dictatorial and despotic state capitalist regimes of Soviet Union and Eastern Europe. How could there be ‘the eclipse of communism’ when communism (socialism the same) has nowhere and never been attempted at all? Just what happened in these countries was appropriately described in 1918 by Fitzgerald of the Socialist Party of Great Britain: ‘What justification is there, then, for terming the upheaval in Russia a Socialist Revolution? None whatever beyond the fact that the leaders in the November movement claim to be Marxian Socialists’ (Socialist Standard, August 1918).
Binay Sarkar
Posted by Imposs1904 at 9:09 AM No comments: