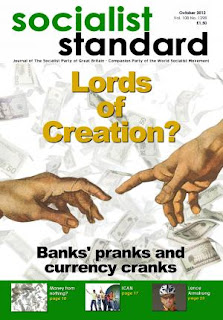 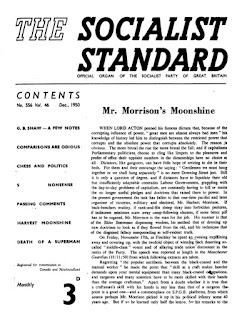 Editorial from the December 1950 issue of the Socialist Standard

The death of Bernard Shaw has been the instance of eulogies galore in all of which he is acclaimed as one of the great, if not of the greatest, intellectual giants of all time. One example of this is contained in the Times' "Literary Supplement" (10/11/1950) which concludes an editorial concerning him with these words:

"Born when Queen Victoria had been but nineteen years on the throne, he was one of the bravest, most brilliant, and most incongruous bequests to us of an era already receding in the legendary and strange. There are never more than a dozen aristocrats of intellect in the world at the same time, if we are to credit Huysmans's calculation. One member of that supreme court is missing to-day, and his successor waits in the shade."

In our view this idea of an "aristocracy of intellect" is based upon an illusion and is fostered because it serves the interest of ruling classes. But let that pass. What we are concerned with here is the claim so often made that Shaw was a socialist who made an outstanding contribution to the socialist movement. This claim has been unceasingly made by the unblushing principal and his adherents during the past sixty odd years; on the part of the latter with an occasional tolerant and amused chuckle at his "crankiness." The basis of the claim is his tilting at social abuses and at smug "respectability." This tilting was really only the spearhead of his own smug worship of "men of ability," in the front rank of whom he modestly placed himself. So we will write a few words and quote a few of his own statements that relate to this claim.

In fact Shaw was not a socialist, never was one, and did not understand what Socialism implied. All his life he confused Socialism with State Capitalism and with a "business-like government." He envisaged a state ruled by a self-elected few who, at the best, would exercise a kind of benevolent despotism over the ignorant mass in a system based upon property with the buying and selling of goods. He swallowed and promulgates Samuel Butler's idea of an inborn "life force" which was the backbone of his particular "great man" theory.

Now let us see what he had to say in his younger days, when he was at the height of his thinking power.

In the "Fortnight Review" for February and March 1894 W. H. Matlock attacked the "Socialist" views of the Fabian Essayists, whom he described as sane and thoughtful men who were the real cream of the socialist movement. Bernard Shaw replied to Matlock in the issue for April, 1894.

The following quotations from his reply explain Shaw's outlook:

"First, it is clear that such huge populations as ours really do owe their very existence to what Mr. Matlock defines as Ability [the inventing, discovering and managing], and not to what he defines as Labour [a form of human exertion used to pile up wealth].
"If State Socialism of the most idiotic doctrinaire kind were to be set up complete to-morrow, and an ordinance issued that every man, from the highest to the lowest, should have exactly equal pay, then I could quite understand difficulties arising from every man insisting on being head of his department."
"What is more I have no doubt that under Social-Democracy the few will still govern, and that, too, without having to consider at every step the vested interests of moneyed noodledom in the system of Conservatism! Well has Mr. Mallock pointed out that the evolution of society produces, not anarchy, but new types of ruler, and I would ask him to add, new forms of government . . . To-morrow it may be—who knows?—an able Labour Ministry, backed up by a bureaucracy nursed on Fabian Essays. And still Mr. Mallock's historic generalisation will hold good: the few will still govern the many."

After quoting a statement by F. A. Walker, an American economist, about the "economics of ability," he goes on:

"There you have your skilled economist. He does not romance about capitalists inventing steamers: he shows you just the capitalist and the labourer running helplessly, the one with his money, the other with his muscle, to the able man, the acting organiser and employer, who alone is able to find a use for mere manual deftness, or for that brute strength or heavy bank balance which any fool may possess. And the landlord must put his acres in the same cunning hands. The landlord, capitalist and labourer can none of them do without the entrepreneur. He, as the only party in the transaction capable 'of the slightest initiative in production,' buys his three indispensables as cheaply as he can; pays the price out of what he makes out of them; and keeps the balance as his profit."

Shaw somewhere accused Shakespeare of snobbery on account of the way kings, princes, lords and ladies bulk in his plays. The above extracts show that he, himself, was also afflicted with the same disease in his respect for those to whom he mistakenly attributed "superior intelligence." From the extracts can also be seen how little difference there was between Shaw's "Socialism" and Capitalism.

Whatever Shaw may have been as a dramatist and artist, as a writer on Socialism he was ignorant, incompetent and blown-up with the petty conceit of the self-styled intellectual. If we were asked what his outstanding contribution in this field was we would unhesitatingly reply that he was given considerable aid to that movement which has built up labour parties that have confused and beguiled multitudes of workers into a path leading to the blank alley of despair. In this field he will be remembered as a clever and witty decoy who helped to head off the march to revolutionary change.
Posted by Imposs1904 at 9:42 AM No comments: