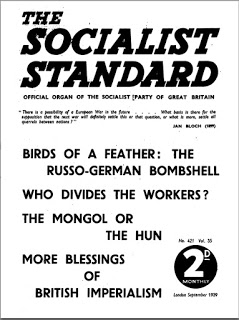 The Japanese Ministry of War acts in accordance with a certain policy which, if persisted in, must eventually lead to a clash between East and West; the capitalisms of the two hemispheres are heading for a conflict in which a thousand millions may be embroiled. We are within measurable distance of the time when “Asia for the Asiatics” will become more than a battle-cry; the slaves of the East are shortly to be pitted against the slaves of the West, and millions are likely to perish on both sides, utterly unconscious of the fact that the real issue involved is, which group of exploiters shall have predominance in Asia, the yellow or the white?

The Japanese Ministry of War is a clear-eyed power. This is how they size the situation up—the quotation is obtained from one of their publications which circulate amongst the military clique.


“From the point of view of the masses which represent the majority of consumers in the entire world, it is desirable that products should be available on the most favourable conditions possible. From this point of view, a country so recently industrialised as Japan enjoys the great advantage of a lower standard of living, whereas countries such as England or the Netherlands are in an unfavourable position. The English and the Dutch favour a small controlling minority in industry and sell their goods at a high price to the coloured population of the colonies: this procedure is contrary to the interests of the masses and to a spirit of fairness. Economic conditions in our Empire, on the other hand, correspond perfectly with the interests of the masses all over the world so that we must, logically become predominant in economic competition. If English and Dutch competition should persist in their methods of unlawful competition, the Empire will eventually be obliged to use armed force so that a spirit of fairness may triumph."

The basis of the quarrel in the Far East is therefore a conflict between two different groups of exploiters; it is as a result of the fierceness of this competition that the dictatorship became more ruthless. In following this development we shall be able to perceive how state capitalism, Fascism and Nazi-ism evolve as a result of the struggle going on amongst the exploiters.

To quote again from the Ministry of War: —

“We must consider that the commercial drive of England and other countries will be intensified in future. It is easy to predict that the Powers will fling themselves on to the Chinese market in order to offset the difficulties into which the Western world has been plunged. We must therefore reorganise and control the policies governing our foreign trade in the shape of national concentration; private interests must no longer be considered, and at the same time we must decide on counter policies which enable us to meet the crises by finding new markets and recovering our old market in China."

Now we will see what those counter-policies are. Enough has been written to show that the State decided to cease consideration of the interests of private capitalists: it was forced to do so. We will continue and endeavour to show by means of the next quotation how the ideology of a dictatorship is born.

“It is desirable that the people should abandon their individualistic economic conceptions; instead, they should recognise the importance of a collective economy; they should work towards the creation of an economic system which will rapidly realise the Empire’s ideal. The State should rigidly control the entire national economy."

Here we have an explanation of the appearance of so-called “National Socialism" in not only Japan but Germany, Russia, Italy and, if we look closely, we shall find the same thing developing in the United States, France and even Great Britain.

We have arrived at that stage in capitalist development when the State is compelled to take charge in all advanced countries; the people now exist solely for the benefit of the State.

It is an indication of the fact that capitalism is moving towards its end, much in the same manner as Engels stated it would in his “Landmarks of Scientific Socialism."

What part will Russia play in the scrap that is pending, will she go with the East or with the West? Russia's foreign policy, like that of her rivals, is determined by conditions.

Lenin once stated that he was the logical successor of Peter the Great; Peter personified the spirit of the Russian people, as Lenin did. Bolshevism is simply pan-Slavism with a red shirt on.

“A burning thirst for conquest is as prevalent a passion in Russia as democratic ambition is in the free states of Western Europe. This passion is the unseen spring which, while it retains the Russians in the strictest discipline, unceasingly impels their united forces against all adjoining states.

"The national energy, which is as great as the national territory, rarely wastes itself in disputes about domestic grievances. For all internal evils, how great soever, the Russians hope to find a compensation, and more than a compensation, in the conquest of the world."

The above statement was made by a celebrated writer in, 1902, and it then expressed the current view of Russia's policy. In 1904, Arthur Diósy, Chairman of Council of the Japan Society in London, writing in his book, “The New Far East,” said: ” Russia first, and the rest nowhere?” ”That is the idea implanted in every Russian mind, the wish embedded in every Russian heart, but not in the manner of theoretical Chauvinism, that sentimental patriotism that makes the people of every great nation desire to see their’s placed first amongst the Powers; no, this Russian patriotism is more of the ardent, irresistible, Japanese type; it is more than a national feeling, because it is a religion.”

In 1920 the Bolshevik armies were held up by the Polish troops and smashed at the gates of Warsaw.
Russia has since modernised her industrial system and will soon be ready to resume her march to warm water ports and the open sea.

The foreign policy of a country is the outcome of her geographical position and her material interests: so long as the wages system prevails in the land of the Soviets, Russia will act internationally much on the same lines as she did in the days of Czardom.

Finland, Latvia, Estonia and Poland are well aware of her real intentions; the embrace of the bear that walks like a man is apt to be lasting; the above mentioned nations know by experience the fatal results of contact.

The quibbling going on about the Russian alliance is largely due to a desire on the part of Britain to avoid it, if possible; by Britain I mean the present Government: Stalin is demanding too high a price.

Russia would gain much if her rivals in Europe were engaged in slaughtering one another; she would then be free to act in the Far East.

Russia is playing a strong hand in the Chino- Japanese war.

The Chinese Communists are under the control of Moscow and carry out the instructions of the Soviet Government.

The policy is to eulogise the Chinese leader, Chiang Kai-shek, at every opportunity, but to disintegrate his party, the Kuomingtang.

At every place where they have influence this policy is energetically pursued: the leader is lauded to the skies but the Party to which he belongs is mercilessly attacked with the idea of undermining it. It is thought by the Communists that when Chiang dies, or retires, the Communist Party can replace the Kuomingtang: in this way Russia hopes to control to some extent the future destinies of China.

The foreign policy of Britain is largely determined by one word—India. Japan now threatens India and all observant minds know that the major conflicts of the future will be fought out on the shores of the Pacific.

Should Germany and Italy fight Britain and France, European capitalism would be very much weakened when it was over, whichever side won. Japan or Russia could then launch the East against the West with every hope of success.

The masses of India joined to those of China, armed by Russia, Japan, or others, could then soon make a rag-shop of Europe. This is what the ruling class of Britain, who take a long view, are beginning to perceive; they want to make terms with Italy and Germany, so that when the major clash comes, European capitalism will speak as one. It is essential that those forces amongst the ruling class making for a European coalition should be taken into consideration, otherwise the diplomacy of our masters cannot be understood.

Whatever they do or say, nothing can save their system; the wheel of the capitalist machine now whirls over the whole world, the markets get relatively narrower and the powers of production wider: war cannot avert the economic crisis or enable capitalism to run on an even keel.

The Japanese, Chinese, Hindoo, or Malay wage-slaves have the same troubles as ourselves: they look at life much the same as we do: they endure similar agonies when on the job and suffer in a similar way when unemployed.

They have imbibed the message of Socialism to some extent, but, like the working class of Britain, many are still made to move and act in capitalism’s interest because of the blinkers of nationalism.

It is our duty to do our best to get them to realise that we have no quarrel with them, that their oppressors and ours are of the same class.

The proletariat come into their own when they have the will to be free and the courage to extend the hands of fraternity.
Charles Lestor