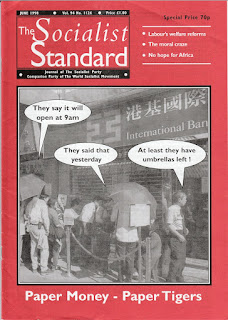 From the June 1998 issue of the Socialist Standard

Exploitation is the fundamental economic process underpinning all class societies. As its form has undergone change so too has the form of class society itself. In feudal society, for example, exploitation took the form of the serf having to work several days each week on the manorial estate, the proceeds of such labour going entirely to the manorial lord. In Marxist terms, this represented surplus labour as distinct from the necessary labour which the serf expended on producing his or her own means of subsistence during the other days of the week. In other words, there was a clear-cut time division of the working week which readily exposed the exploitative nature of feudal society.

In capitalism, workers also perform surplus labour but as Marx points out in Volume I of Capital "this fact is not directly visible" as the "money-relation conceals the uncompensated labour of the wage labourer". Lacking the means to provide for ourselves (which even the feudal serf had in the form of a small plot of land and access to pasture) we have to sell our working abilities—our labour power—to the capitalist owners of the means of production in return for a wage (or salary). Having purchased our labour power, the capitalists then require us to work for them.

In the course of working for them we produce a greater value in the form of the commodities we create than the value of the wages we receive. Out of this "surplus value", the capitalists obtain an income to support a lavish lifestyle but, more importantly, the necessary new capital to reinvest in their business enterprises. Indeed, the need to accumulate capital out of surplus value is the driving force of capitalism. It stems from the economic competition between enterprises which compels each enterprise to increase their market competitiveness or succumb to superior competition and go bankrupt. So, increasing the amount of capital at their disposal to invest in more productive technologies means increasing the amount of surplus value extracted from their workforce which in turn means, among other things, holding down their costs, including their labour costs—our wages!

As workers, we are exploited by virtue of the fact that we produce—and indeed must produce—surplus value for the capitalists to appropriate and use for their own ends. Unlike the feudal serf however, our necessary labour (the labour required to produce a value equivalent to our wage or salary) and our surplus labour (the labour required to produce surplus value) are not discontinuous in time but simultaneous—the point that Marx was driving at. This concept of exploitation is very different from the more popular version which equates exploitation with workers being paid low wages or being harshly treated by their employers. In our view, even if we were paid high wages and were relatively well treated, we would still be exploited. Exploitation, in other words, is something which is built into the very nature of the employment relation itself which implies the division of society into employers/owners and employees/non-owners and all this entails.

Nor do we advocate equal wages for all. That would in any case be impossible to achieve. Since wages are the monetary expression of the value of labour power and since it costs more to produce and maintain the labour power of a skilled worker than an unskilled worker, this is bound to be reflected in the different wages each receives. In short, labour power being a commodity, its price (our wages) must reflect on average the amount of socially necessary labour time (or value) embodied in it.

In socialism, however, labour power will no longer be a commodity to be bought and sold on a market. Indeed, the employment relationship as such would no longer exist by virtue of the fact that the means of production will have become the common property of society. Individuals will voluntarily contribute to the production of wealth and freely take what they require from the wealth thus produced.
Robin Cox
Posted by Imposs1904 at 11:28 AM No comments:

Weekly Bulletin of The Socialist Party of Great Britain 129

Welcome to the 129th of our weekly bulletins to keep you informed of changes at Socialist Party of Great Britain @ MySpace.

"Common sense, in so far as it exists, is all for the bourgeoisie. Nonsense is the privilege of the aristocracy. The worries of the world are for the common people." George Jean Nathan, 1882 - 1958.