The Collapse of Trotsky’s Monument (1991) 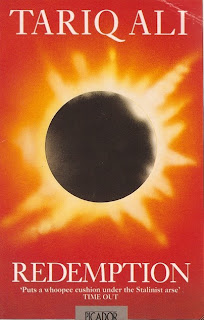 Book Review from the October 1991 issue of the Socialist Standard

Bad news for Tariq Ali. Having with Redemption written an outrageously funny novel about the pretensions, delusions and follies of the Trotskyist Left in which he was once a prominent participant, he has been denounced as a renegade, a traitor, a bourgeois philistine, a despicable leper . . . only the Leninists know how to denounce like that. Having deployed his wit against the world Trotskyist movement, the crumbling Trotskyist monuments have responded with their dependable witlessness. The totally humour-free Socialist Workers' Review dismissed Ali's effort as "unfunny".

We suspect that Ali can cope with such devastating assaults. Impossible to cope with for him will be what is here: an article in the Socialist Standard praising him as a novelist and recommending this satire to all socialists who for years have laughed their heads off at the antics of the would-be vanguards on the Left. Old Leninists desert all kinds of silly prejudices as they discard their old dogmas, but few of them lose their dislike for those four commonly-spat initials, the SPGB. Bad luck. Tariq – everyone else thinks your novel stinks, but this writer loved every page of it.

Redemption is an almost relentlessly funny novel. What Malcolm Bradbury did to the trendy campus clowns in The History Man, Ali has done to the bar-room Bolsheviks of the Trotskyist left. The story concerns the aftermath of the east European uprisings of 1989 and the preparations for and holding of a congress of the Trotskyist Fourth International to formulate a new political position. The old Bolshevik formula is in worldwide disrepute: the proletariat have kicked out the dictatorship and the only believers left are the would-be dictators. These "leaders" are shown as pathetic, deluded, dishonest, unscrupulous and, not infrequently, insane men.

There are several easily identified caricatures of Trotskyist leaders. They are painfully accurate. Ali is ungenerous and spiteful towards these superstars of the sects, but they in real life are ungenerous and spiteful people whose opportunist tactics and contempt for working-class understanding makes them fair targets for Ali's poison pen. There is Frank Hood (the late Gerry Healy) who has young women from his party, the Hoodlums (WRP), sent to him for sex sessions. Another leading Hoodlum is Laura Shaw (Vanessa Redgrave) who drives to Trotskyist meetings in her chauffeur-driven Rolls and has Hood's body embalmed after he dies at the shock of a young female "comrade" discovering his artificial penis. There is Jed Burroughs (Ted Grant), the Shadow-Shadow Prime Minister and leader of the Burrowers (Militant Tendency) and Jimmy Rock (Tony Cliff), author of The Rockers Guide To Soviet Realities and leader of the Rockers (SWP).

The chapters on these latter two sects, which are both as detestable as each other, are the funniest pages in the book. Also captured with an accuracy which only a novel could capture so acutely (a pamphlet would be libellous, after all) are John Justice and his Satanist Tendency (the ultra-barmy Spartacist League in real life – real life?). Jemima Wilcox, editor of the "New Life Review" (New Left Review), Diablo (a parody of the ex-Trotskyist veteran Pablo) and Jim Noble, the archetypal fascist/Leninist leader of a party based on the American SWP called in the novel the Proletarian International Socialist Party of American Workers -PISPAW for short; get it? This was the section of the Fourth International that Ali used to be involved in.

LEFTWING SEXISM
Ali seems to think – and he should know because he has been closer to the Trotskyist leaders than most of us – that these people are motivated either by sexual disorders, whereby left-wing fantasising becomes a form of replacement for a humane sensuality, and/or egomania. These sound like cheap smears, and might have been intended so, but the analysis is not without insight We live in a society of perverse notions of success. Leninism, as a strategy for successful power-taking, is deeply authoritarian and is bound to attract those for whom the rhetoric of power (dictatorships, central committees, democratic centralism, smashing states, orders from above) is appealing. For such political personalities the power obsession becomes functional rather than instrumental. It should come as no surprise to materialists that the men who run power-hungry sects are created out of the ingredients which make up other authoritarian bosses who expect to have their egos massaged by their followers – and not only their egos.

Emma Carpenter, a disillusioned American Trotskyist in the novel, tells Jim Noble that the Trot sects are mirror images of Stalinism; Hood/Healy is referred to as an "inverted Stalinist". The capitalist system has screwed up a lot of people in its time, so what is odd about the fact that some of them try to screw up their unwitting political followers in a futile attempt to unscrew themselves? Maybe some of the characterisations are a touch crude in their depictions of the psycho-pathology of the fantasy lives of lefty leaders, but there is nothing far-fetched about the novel's description of they way in which so-called radicals have often treated women like dirt. (Let's fight for equality, but tonight, Me Dictator, You Proletarian). Left-wing sexism, an infantile disorder?

Redemption has some interesting things to say about the way that the Left treats women – one half of the species. The character of Maya, the young Brazilian beauty who is made pregnant by the seventy-year old Ezra Einstein, reminds us that while geriatric dogmatists play at revolutions in congress halls it is often women who are connected to those feeling of humanity without which there will never be any genuine socialism.

POLITICAL NUTCASES
Ah yes, socialism. This is where Ali has advanced no further than his days in the Trotskyist mad-house. Ali still believes that socialism came about in Russia in 1917. He applauds Leninism, but is embarrassed by the Leninists. On page one he writes of how popular wisdom had "consigned insurrections to the museum of Europe", but throughout his book he never touches on the root of the Trotskyist fallacy: the belief that by a vanguard-led insurrection working-class liberation, and therefore, socialism, can come about. In this he is at one with the political nutcases in his novel. He quotes Emma Carpenter's grandfather's Menshevik criticism of the Bolshevik adventure, but takes neither that critique nor any of his own a step further. He parodies Rock/Cliffs thesis that state capitalism came to Russia in the 1920s after years of Russia having been socialist, and rightly ridicules such unhistorical drivel, but what does he say about the serious state-capitalist analysis stated persistently since 1918 by the Socialist Party? Trotskyists have never liked to admit that they are simply Leninists who did not like Stalin's continuation of what Lenin began. This writer recalls challenging Ali to a debate several years ago on this very question. He replied that there was nothing that the wise Marxists of our party could possibly learn from him. No, that was not the point of the educational exercise.

The novel concludes with the congress of the Fourth International adopting a strategy from its master theoretician, Ezra Einstein (Ernest Mandel), to infiltrate the religions of the world. More could be gained from this than from boring within the left-reform parties, he believed: "Within ten years I predict we could have at least three or four cardinals, two ayatollahs, dozens of rabbis, and some of the smaller Churches like the Methodists in parts of Britain could be totally under our control. Our aim is to occupy the Vatican and elect a Pope from our movement". The PISPAW delegation responds with a resolution to form a new Trotskyist religion based upon the "dictatorship of the Angelariat". Very funny – nearly as hilarious as so-called Marxists telling workers to vote Labour at election time. 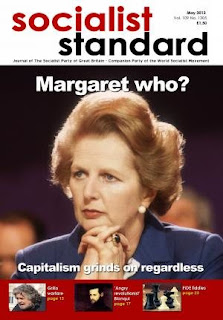 Editorial from the May 2013 issue of the Socialist Standard

In life, Margaret Thatcher, never humble, gladly accepted her transformation from shopkeeper’s daughter into capitalist icon. She was The Iron Lady, TINA, and the woman who made Britain great again. She was the architect of ‘Thatcher’s Britain,’ a tough, free-market economy whose backbone she stiffened with ‘Victorian values.’ To her supporters, Margaret Thatcher arose as the conquering hero who broke the power of the unions and saved the country. To her detractors, she was the harpy that devastated working-class communities, destroyed British industry and took pleasure in doing it. Francois Mitterrand, the French ‘socialist’ president fancied he saw in her, ‘the eye of Caligula and the mouth of Marilyn Monroe.’

The Thatcher myth obscures the reality. In truth, the grocer’s daughter followed policies that were neither exceptional nor original. When she came to power in 1979 capitalism in much of the world was experiencing its biggest economic depression in 30 years. In Britain, as elsewhere, business enterprises were failing, production had slumped and unemployment had begun to soar. Governments of all political colours were reacting to the economic downturn in the only way that was possible under the iron laws of capitalism, by cutting back on spending and allowing the system to take its course. Those who acted otherwise were soon given a lesson by the system.

If there was anything distinctive about Thatcher’s politics, it lay only in the enthusiasm and energy with which she set herself to her task. ‘Thatcherism’ was a political style: abrasive; uncompromising; and ruthless. It was unapologetic. ‘There Is No Alternative’ she said and hammered the words home again and again. Her message was simple and accurate. Capitalism runs in accordance with its own laws and, despite the assertions of many politicians, offers little choice to those who claim to run it. TINA cut back on government spending, opened the nationalised industries to the discipline of the market, allowed unprofitable businesses to fail and sank her teeth into the miners. She was very, very thorough.

Yet the myth prevails, and we should beware of it. Above all, we should beware of the myth promoted by those that hate her for what she did. Thatcher the hate figure is of immense value to capitalism. It is easy to imagine embodied in the woman herself all the ugly and anti-working-class features of the system: its relentless drive to minimise working-class incomes; its unconcern for working-class lives; and its insatiable demand for profit above all other things. These are its unchanging features; Thatcherism was merely its naked political expression. It may be necessary to remind ourselves at this time that the death of Thatcher, real and symbolic, does not imply the possibility of a more benign management of capitalism. That would be to create another dangerous myth: Thatcher the scapegoat, symbolically carrying into death the sins of capitalism and purifying the system. But capitalism can only be run in the interests of the capitalist class.

For socialists, celebration is premature. The death of Thatcher changes nothing. We will save our celebrations for the time when capitalism, the real enemy of the working class, is defeated.
Posted by Imposs1904 at 6:42 AM No comments: