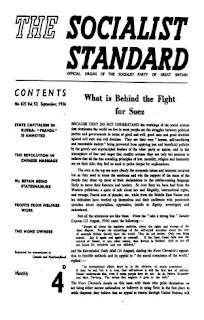 Editorial from the September 1956 issue of the Socialist Standard

André Philip, who recently visited Russia with a delegation of members of the 'Socialist Party of France," wrote up an account of what he saw and heard for the Manchester Guardian (his articles appeared in the. issues of 2,3,6,7 and 8, August). On August 8 the Guardian also published an article dealing with an attack on Philip which appeared in the Moscow Pravda on 28 July, 1956. Pravda devoted a quarter of its space on that day to criticism of what Philip had said about Russia on his return to France. Above all Pravda was angry because Philip denied that there is Socialism in Russia, describing it as "State Capitalism."

Pravda's argument to prove that Russia has Socialism is as follows:—

"In the Soviet Union the means of production are the property of the working people. Since there are no capitalists, how can there be any talk of State capitalism? There is no capitalist ownership; there are no exploiting classes. This is the complete triumph of Socialism."

Pravda goes on to lecture Philip on the meaning of the word Socialism that has been "accepted by Socialist thought throughout the world for more than a century." This meaning, according to the Russian newspaper, is “the liquidation of the private ownership of the means of production and the transfer of the means of production to public ownership.”

The thing that must strike the Socialist on reading this stuff is that Pravda writes just like some woolly-minded member of the Labour Party trying to prove that since the railways and coal mines have been “transferred to public ownership" that they are now the property of the working class. We have hard it all before, from the MacDonalds, Attlees and Bevans, and now we have to hear it from the Communists.

Our first point in reply to Pravda is to deny the truth of the statement about what Socialist thought has accepted for a century. What exists on Russia is not in the least like the definition of Socialism used by Socialists. In Russia production and distribution are largely in the hands of the Government as are the coal mines and railways, etc., here. They are operated to produce commodities for sale at a profit, and backing them financially is the very large Russian national debt owned by large and small bondholders. There is in Russia as great (or even greater) inequality of income as in this country though not as great inequality of ownership of accumulated wealth. Also though Russia has private trading it has not the British company system of shareholders.

This is State capitalism just as are the nationalised industries in Britain. And when did Socialists ever describe it as Socialism? We can of course answer for ourselves that the S.P.G.B. never did so on any occasion since its formation in 1904.

And if, as Pravda maintains, Socialists for a century have used the name Socialism to mean what exists in Russia why is this flatly contradicted in Communist works published before this distortion of the word had been decided upon. Let the Communists look for example at "A Short Course of Economic Science," by A. Bogdanoff, published in 1923, by the Communist Party of Great Britain. Here we were informed that Socialism is “the highest stage of society we can conceive" (p. 391), that “under Socialism the question of profits will disappear in production also” (p. 380); and that “with the establishment of Socialism, all taxes, including the progressive income tax, will become superfluous" (p. 295).

Perhaps Pravda will now tell us how it squares the above, which is what Communists used to say, with what they say now about alleged Socialism in Russia, for not even Pravda can deny that an elaborate system of differential taxation exists (including a profits tax) and that the State concerns are required to make a profit or show good reason for not doing so.

Pravda might also recall that back in the nineteen-twenties Lenin was advocating State Capitalism in Russia (see his “Chief Task of our Times”) and not pretending that it is Socialism as does Pravda now.

Before we leave the subject a word to André Philip. He is quite right to point out that the Russian system is not Socialism but State Capitalism, but is he always so clear-headed and outspoken about the muddle-headed propaganda carried on by his own party in France?
Posted by Imposs1904 at 11:39 PM No comments:

Exhibition Review from the September 2017 issue of the Socialist Standard
Friedrich Engels spent most of his working life in Manchester and Salford, and was frequently visited there by Karl Marx. Now the Working Class Movement Library in Salford is hosting an exhibition on their lives and work, on till the end of September. Sadly, though, there is apparently little hard evidence for the oft-told story that the two of them drank together in the pub now called The Crescent, a couple of hundred yards from the Library.
The exhibition consists mainly of copies of various works by and about Marx and Engels, plus information boards. The topics covered include the two men’s backgrounds and upbringing, their families and personal lives, their political activities and the historical and economic background to these. There are photos, taken as they were being demolished, of the streets where the father of Lizzie and Mary Burns (Engels’ partners) lived. Various copies of the Communist Manifesto are displayed, including the one published on its centenary in 1948 by the Socialist Party.
The fair point is made that the main legacy of Marx and Engels ‘was not a political programme or doctrine, but a detailed methodology for further inquiry.’ It is also noted that it needs to be discussed whether Marxism is responsible for the crimes of Stalin and Mao, but disappointingly nothing more is said on this matter: after all, the straightforward conclusion is that Marxist ideas are in no way to blame. Importantly, it is made clear that Marx and Engels considered that the emancipation of the working class was the task of the working class itself (as in Clause 5 of the Socialist Party’s Declaration of Principles), and this is contrasted with Lenin’s view that socialist consciousness had to be brought to the working class from outside.
All in all, an informative exhibition which displays a range of books and other documents from the Library’s collections. A pamphlet containing the wording of the information boards and some illustrations is available from the Library (51 Crescent, Salford M5 4WX; www.wcml.org.uk).
Paul Bennett
Posted by Imposs1904 at 9:37 PM No comments: 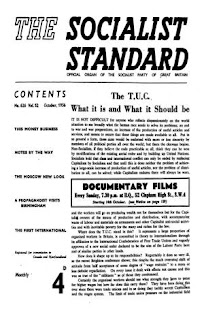 Now that we have read in full what Khrushchev has said about the late Russian dictator, one important point emerges—Khrushchev blames Stalin and the excesses of Stalinism. But nowhere does Khrushchev question the system itself. “Big Brother” made mistakes, but “1984” remains! To Khrushchev the system itself is “good" and the system is—Socialism!

Although the Soviet Government allows only one political party—the Communist Party; although, even to-day, after Stalin’s death, after Beria’s death, there is still the secret police; although there is a powerful army, navy, and air force; although there are rich bureaucrats, trust directors and government bond holders, and on the other hand millions of peasants and ordinary workers living in poverty, all this—and much more—is still defended by the Khrushchevs, by the Communists in all lands, as “Socialism.”

Whether Khrushchev and his fellow Communists in Russia and elsewhere are knaves or fools we know not; whether they really think that the Russian set-up has anything in common with the ideas of Socialism is difficult to say.

Since the time of the Russian Revolution in 1917 the Socialist Party has repeatedly stressed the fact that whatever did happen there Socialism was not a practical possibility. Firstly, Socialism can only come about on a world scale. Secondly, a majority of people must understand the implications of a Socialist society and be prepared to work for such a society when it’s brought about; and thirdly. Socialism cannot be a workable alternative unless the means of production are enough to enable people to produce sufficient wealth for everyone’s needs. None of these conditions could or did exist in Russia in 1917.

At the time of the Russian Revolution, Russia was a backward semi-feudal state, ruled by an autocrat, the Czar, without any real democratic traditions. Under such conditions the emergence of another despot—Stalin—was almost inevitable. In order to force through the industrialisation of the Soviet Union at such a pace he was considered by the Communists, including the Khrushchev, as absolutely necessary. The Khrushchev and other Communist, who now condemn Stalin, were just as much a part of Stalinism as was Stalin himself.

The form of society that has emerged in Soviet Russia, despite its dictatorship—personal or collective—its slave camps, its mass murders, etc., is not so much removed from that of Britain or France or the United States. In Russia large numbers of workers are employed (by the State) for wages (paid monthly). Goods and services are not rendered just because they are needed, but, like elsewhere, for a profit. The peasants of Russia are exploited like the peasants of France or Spain. The workers of Russia are exploited just like the workers of Britain or America. The land, the factories, the means of transportation, are not the property of the people but belong, again, as elsewhere, to a few. In Britain or the States we call it capitalism: a society of wage-labour and capital. In Russia the Communists call it “Socialism.” But Socialists still call it Capitalism—State Capitalism.

Socialism would have none of the features of Stalinist or present-day Russia. Socialism will be a free society and democratic throughout. The means of living will belong |o all. Secret police, dictatorship and the horrors of a coercive State will no longer be necessary. But such a society, we feel, is beyond the ken of Khrushchev; he can only blame Stalin, the very man he previously defended for so many years.
Peter E. Newell
Posted by Imposs1904 at 5:53 AM No comments: