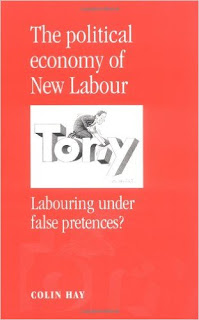 Book Reviews from the December 2000 issue of the Socialist Standard

If economics is the dismal science, then political science must be its poor cousin. Colin Hay's book is another in that long line of critical studies of the Labour Party from leftist commentators wishing they could run capitalism better in the fervent belief that the politicians have the power to effect real changes.

Hay's solidly cultural materialist analysis of Labour's political development since the 1980s begins with a look at the cult of novelty within the Labour Party, and the way in which the signifier "New" has been used to create a distance from an unspecified past to an equally indistinct present political position. Hay then backs up this analysis with an elegant description of the "hotelling" model of voter preference and political competition: i.e. that political parties, much like high street retailers, will tend to try and converge on the same best pitch for securing votes.

Hay then describes how Labour has been trying to catch up with the significant changes to the political apparatus wrought by the Tory party during their period of office. Hay proposes that Labour has surrendered to their perceptions of the new voter consensus, and that New Labour is the product of "preference accommodation" as opposed to "preference shaping" on their part, i.e., that they adapt to voters' views rather than trying to change them. Hay ascribes this as being in part an undue attachment to finance capital, as opposed to industrial capital.

Hay delineates what he perceives as being the main problem for British capitalism—the persistent under-investment of capital within the British economy. He then poses a wish list of reforms: the creation of regional government to promote investment and changes to pension fund laws (including possible regional pension funds) in order to allow them to invest more in British manufacturing. His aim is explicitly to make capitalism work—he even approvingly cites Engels's definition of the state as an idealised capitalist as being the state of affairs that should pertain.

Although successful, to some extent, at analysing what has happened to the Labour movement on an empirical level, Hay does not demonstrate why Labour has chosen to follow preference accommodation rather than shaping. He does not analyse the movements within the party, nor the structures of dependency and power that sustain them. Nor, for that matter, does he analyse the perceptions within the capitalist class that have led to them seeking to pursue one particular economic consensus over another. In other words, aside from his airy reforms, Hay does not look at the operation of economic conditions as a driving force for political ideas. In his support for capitalism, and his wish to make it better, he overlooks that capitalism is the ultimate limiting factor on political attempts to save it.
Pik Smeet 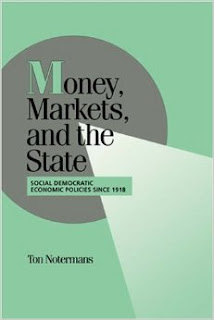 In the camera obscura of capitalist ideology, it seems that ideas make the world, instead of the world making ideas; and that it is the determining will that guides the course of history. The result of applying such a theory to the world can be found in this book. Ostensibly a broadsweep history of the implementation of Social Democratic policies in Sweden, Norway, Netherlands, Germany and the UK since 1918, it is also an attempt to vindicate the premises and potential of those politics. Asserting that unemployment is the main scourge of capitalism, Notermans contends that currency policy combined with the requisite social structures can be used to sustain full employment.

Notermans qualifies his support for economic reforms by placing all policies within a "paradigm" that he claims lies beyond the control of politicians. Essentially he suggests that all economic policies operate within either an inflationary or a deflationary context. He states at the very beginning of the book that he considers inflation is any rise in prices, rather than the classical view—and the Socialist Party's view—that inflation is a decline in the value of money. This means that Notermans regards price rises due to a changing supply/demand ratio during an economic boom as "inflation". Further, his notion of "inflationary paradigms" is based on his subjective approach to economics—if investors have expectations of continuing profits then they will pour more money into production, and thus create "inflation", and if they feel that economic and political conditions are against profitability they will withhold. Notermans frequently contrasts this view with Marxist "fatalism".

He further extends this voluntaristic view of economics by asserting that the Great Depression was a result of government policy, and that recessions are deliberately instituted by governments as a means of combating excess inflation. The problem for Social Democratic parties, he explains, is that if they try to implement their macroeconomic policies in conditions of an expanding inflationary context, then eventually wage-inflation will cause investment to run out of control, and cause a "paradigm change" (he suggests that precisely this happened in 1968 at the end of the post-war boom).

Notermans concentrates on currency policy as having a determining role on investor confidence, consequently government economic priorities must be oriented towards growth, regardless of political hue, the form of the policies being dependant upon the context within which they operate. In times where inflation is the threat, he asserts, the aims of full employment for social democrats are in conflict with the essential economic paradigm, where deflation is the threat then the Social Democrat policies work. Hence, he asserts, after the deflationary spiral of the thirties, the massive state intervention for full employment across Europe was successful.

Claiming that wage increases cause price increases, Notermans identifies "wage moderation" (i.e. workers taking less wages than market conditions would allow them to) as being the key to Social Democrat success in an inflationary context. This is in contrast to the neo-liberals who rely on high unemployment to restrict wages. He notes how Keynes promoted inflation as a way of reducing real wages, so as to get around the downward rigidity of nominal wages. His examination, thus, looks at the differences between the trade union movements in his object countries, and the way in which their degree of centralisation was used to promote "moderation".

The value of this book lies mostly in the insight into the mind of capitalist economists: the dogged determination to show that the market system works, and the unshakeable belief that the consequences within the market economy are the result of mistaken or otherwise conscious decisions of the actors within the economy. Further, it gives an insight into the mindset of the political milieu around New Labour and European Social Democratic parties. If Notermans is to be believed, it is the government tale that wags the capitalist dog.
Pik Smeet
Posted by Imposs1904 at 11:45 AM No comments: 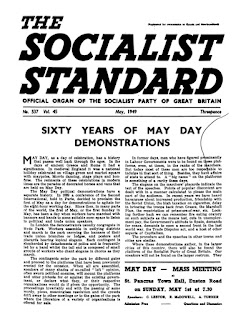 If ever I stood before the microphone and was asked by Wilfred Pickles what two thing I disliked most, without hesitation I would say Poverty and War. Furthermore, if I was asked what one thing I would like to do before I died, I would reply that I would like to play a part, if only a small part, to help to establish a new social order, in which the whole earth and the fulness thereof would become means to the comfort and happiness of all. Likewise the aforesaid means of wealth production and distribution would be democratically controlled by and on behalf of the whole community, regardless of their sex or colour.

Then waxing rather eloquent, I would inform my astonished audience, that under the new social order there would be no landowners, no property owners, no rent books, no title deeds. As for their rent books, the ration books, identity cards and their bank books, etc., they could cast them into the bonfire. Then Armies, Navies, Air Forces and Police Forces would not be required, as the causes of war and private property had been abolished. There would be no Secret Service, no espionage, no counter espionage, no Gestapo, no Ogpu, no M.I.5, no F.B.I., or any other form of Secret Police. There would be no Frontier Posts, no Customs, no Excise. This would gladden the hearts of my listeners,—there would be no Entertainment Tax, no Purchase Tax nor Income Tax. There would be no Millionaires, Dollar Millionaires, Sterling Millionaires, or Russian Rouble Millionaires. Neither would there be required a dog licence, a car licence, or a wireless licence. I would then ask my listeners if their wireless sets were now playing better.

Then the audience would gaze and wonder when I informed them that there would be no Popes, Cardinals, Bishops or Priests. No Deans of the Red Variety, nor Deans of the Dean Inge Variety. And the audience would gasp when I informed them that there would be no longer be required a Home Office, a Foreign Office, a War Office, no Board of Trade, no Import Boards, no Coal Boards. Finally I would inform them that when they thoroughly understood the real causes of their poverty, squalor and war, they would make a rapid decision that would speedily end the Social System which is the cause of those evils. They would no longer be content with half a loaf, but would take possession of all the bakeries of the world
. They would also take possession of all the textile machines and all the millions of yards of cloth, make good, beautiful clothes and wear them, no money or price being required. Also they would take possession of all the stone, clay, concrete and steel and make strong, beautiful houses and live in them, again no money, no price, no rent book, no mortgage or building society.

They would require no Leader, no Messiah and no Saviour. They the Working Class would have to transform Society themselves. When they commenced to do these things, it would usher in a New Social Order and it would be known throughout the world as Socialism.

Then Wilfred Pickles would say, "Barney, give him the money."
Nat Posner
Posted by Imposs1904 at 11:19 AM No comments: 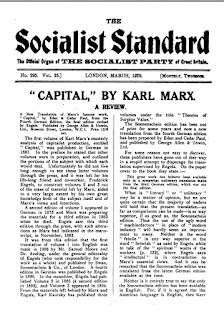 In the February Socialist Standard (see page 94, column 2) our contributor, A. Kohn, pointed out that Socialists do not object to capitalism as a "mistake" or a "monstrosity," but "recognise its place in social evolution as a pre-condition for the coming of Socialism." A correspondent, "Humanitas," writes to protest that a system of society which is based on gross inequality of wealth with the resulting "tragic consequences of life" must be regarded as "a mistake and a social monstrosity."


Such stark injustice  . . . . condemns any system, whether it leads to Socialism or any other state. In the name of logic and scientifically-grounded philosophy how can social injustice and (implicitly) the cruelty that initiated and continues it be justified or excused on any grounds?

In the first place. "Humanitas" has misunderstood our contributor's point. The statement was not a "justification" for capitalism, but a mere statement of fact. It is a fact that capitalism has made Socialism possible, but the Socialist does not "justify" capitalism on that ground. The reason for the existence of capitalism was that if offered the means of bettering the conditions of life of society as a whole. Capitalism is developing in Russia, for instance, because as a literal fact it offers a higher standard of living to the Russian workers and peasants than is, with Russia's low development of industry, obtainable otherwise. To talk about capitalism being "initiated and continued" by "cruelty" is a mere empty phrase. Capitalism was initiated by persons who—both capitalists and wage-earners—stood to gain thereby. It is continued by capitalists and wage-earners in this country because both, the former correctly and the latter incorrectly, think that they still cannot do better than continue it. The Socialist points out that the functions formerly performed by the capitalist class (functions which made it worth while for society to accept the existence of a property-owning class) are no longer performed by them. The capitalist system can now, with advantage to the majority, be dispensed with.