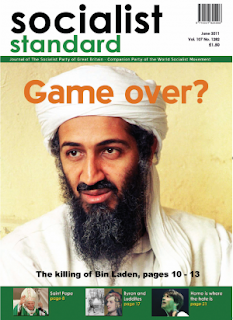 Editorial from the June 2011 issue of the Socialist Standard

Around the middle of the last century there were a group of nice people who called themselves Moral Re-armament. They saw some nasty things about the world in which they lived, but they put this down to miscreants who behaved in illegal or immoral ways. They approved of well-earned profits, a fair day’s work for a fair day’s pay, and all that jazz. The Socialist Party debated with them.

Then came the unacceptable face of capitalism, in the shape of the ‘bad cops’ who did a bit too much of what the ‘good cops’ were doing routinely. Greed was good, but too much of it by the wrong people was bad. Workers who wanted more wages or salaries were to be deplored. Capitalists who wanted more profits were OK – they helped to ‘grow the economy’.

The latest take on the profit system is that we have two kinds of market – the fundamentalist and the free. The fundamentalist market is the one in the black hat. It is part of a bidding culture that sets one group or interest against another. If one wins the other loses.

According to Philip Pullman (Guardian, 29 January), this bidding culture has “imported the worst excesses of market fundamentalism into the one part of our public and social life that used to be free of the commercial pressure to win or lose, to survive or to die, which is the very essence of the religion of the market”.

But Pullman is not optimistic about the future. “I’m afraid these fundamentalists of one sort or another will always be with us. We just have to keep them as far as possible from power.”

Now the oxymoronic free market. Very beneficial to the capitalist class, not so beneficial to the working class. Owners of capital are free to invest in it to ‘earn’ rent, interest or profit. Workers are free to offer themselves on the labour market – they may or may not get employment. Whether they do or not – especially if they do not – they suffer material and mental deprivation,.

Moral or immoral, with or without an acceptable face, involving fundamentalist or free markets, capitalism shouldn’t be supported by the majority it exploits.

We don’t have to choose the lesser of two evils – we can help towards something better. A world where the resources of the planet have stopped being the property of rich individuals, corporations or states and have become the common heritage of all. On that basis goods and services can be produced directly to meet people’s needs without the intervention of markets. Neither a free market nor a controlled market but a non-market society.
Posted by Imposs1904 at 7:53 AM No comments: