Book Review from the December 1985 issue of the Socialist Standard

In all developed capitalist countries the same basic pattern has been followed. A take off in government spending, mostly accounted for by reformist welfare schemes, with a relative shift towards central government, away from local levels. In Britain and other European countries this trend started earlier. This leads us to the topic of inflation. The Friedmans are in no doubt that the main cause of inflation over the centuries of money economies has been deliberate acts by governments. This assertion is conclusively backed up by the statistics the authors offer. Noting that inflation in America took off not long after government spending, they show how the large and unpopular tax increases (unpopular to many workers as capitalists in general, although this feeling is based on a misunderstanding of how wages are determined) necessary to finance these programmes can be partially staved off by "deficit financing". Often a government will resort to borrowing as an alternative but problems generally arise about the repaying of loans with interest which increases the temptation to resort to the printing press.

As total supporters of capitalism the Friedmans understandably omit to mention an important advantage of inflation from a ruling class viewpoint. Between one wage settlement and another the workers' purchasing power is steadily eroded, leaving it to them to take the initiative in an attempt to rectify the situation. The mere fact that if deflation rather than inflation were to obtain all this would be reversed is a powerful disincentive restraining most capitalists from pressing for more than reduction in the inflation rate.

In dealing with proposals to bail out "lame ducks" (another allegedly progressive cause), the authors examine the case of the Chrysler Corporation, an example viewed with favour by many leftists. They point out that no change in the car market resulted from this action by the state. Instead of going out of business Chrysler continued to sell cars so there must have been a reduction in sales so there must have been a reduction in sales by their competitors. The jobs "saved" at Chrysler were lost elsewhere. Those who lost were diffused and largely unaware of the connection but wherever they live there was no net gain of jobs. That the Friedmans can see this so clearly puts into a pretty poor light those lefties who are endlessly calling for "job creation".

The authors raise an objection to capitalism being described as the "profit system". They say it is a profit and loss system, and identify the loss component as the more important as it is this, or the fear of it, which they believe enhances the efficiency of the system. Whatever merit there is in this observation, it puts the Friedman's out on a limb even among the open defenders of the present system. Capitalism would still be ugly and inefficient from any sane standpoint even if regular profits could be guaranteed. However, it is the loss factor and the reaction it forces on individual firms that activates the most objectionable features. It is fair to say that most reforms, whether initiated by capitalists themselves or forced from them under pressure, have been designed to mitigate these loss-induced features. From this as we have already seen arises a significant part of the big government and its big spending against which the Friedmans have been railing for so long. The efforts of "entrenched trade unions" (sic) to protect themselves by establishing minimum wages and some form of job security also earn a blast from the authors. Generally speaking the unions have no alternative, although care is required to see that action does not "save" one man's job by taking another's away.

Even with our somewhat charitable interpretation this exhausts the digestible parts of the book. Big government is the enemy and the answer is to reduce it, the authors say ad nauseum here and elsewhere. Exactly how far they wish to go along that road is not made clear, but at least they don't pretend to be advocating "socialism" or even to be benefitting all workers. Clearly they regard socialism (as we use the term( as pure fantasy, while liberally applying the word to other forms of capitalism. Some absurdly simplistic "solutions" are put forward. Crime, for instance, could be cut by from a third to a half by simply legalising the trade of narcotic drugs. Incidentally we are told that crime cannot be related to social conditions because if it were the rate in Bombay and Calcutta would be much higher than in American cities instead of the reverse being the case. The Friedmans' notion of who pays taxes is almost the complete inverse of reality. They deny that the capitalists pay any taxes, because they think they can pass the cost on to the customer, and see the whole tax burden as falling on individuals, mainly workers.

The Friedmans' arguments, given in more detail in their earlier works, are only a contribution to the continuous debate on how best capitalist can be run, a subject in which we have no interest. Unlike many others of their ilk, they have stuck to their views with some consistency which is why they occasionally make telling points which escape or are ignored by their rivals. If for instance a government increases tariffs on certain imported goods, it may well be, as the Friedmans imply, that in the long term more harm than good may come to the local capitalists as a whole. But those immediately threatened may well have gone out of business before the longer term effects are noticed and they will therefore press for all they are worth for a protectionist policy. When any harmful side effects manifest themselves other short-term crises will have arisen to divert attention from the cause. Not that sectional interests are not sacrificed, indeed even this oversimplified example shows that not all capitalists can be accommodated at once. It is this continuous cut and thrust from which the authors stand apart, seeing attempts by governments to follow a consensus line as weakness and lack of principle. The Friedmans point out that the Reagan and Thatcher governments were elected promising apparently sweeping changes of which they (for once) approved. However after a honeymoon period these administrators lost momentum. They are correct in thinking that this is a common occurrence, and the basic cause is as illustrated by the tariffs' example but multiplied to cover all capitalist interest who feel threatened. Usually the government is forced to pay attention to this clamour and modify many of its policies, although there have been some exceptional cases. What cheek it is to describe this process as a tyranny! Being forced to sell our labour power to an employer as the only way to make any kind of living, now that is a tyranny. 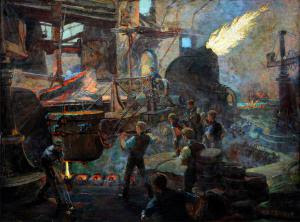 The Mixed Media Column from the September 2015 issue of the Socialist Standard
The Kelham Island Museum in Sheffield displays the industrial history of Sheffield, once known as the 'Steel City.'
The painting The Wealth of England: The Bessemer Process of Making Steel (1895) by William Holt Yates Titcomb is on display to complement the impressive Bessemer Steel Converter (iron into steel), by Henry Bessemer which was licensed to Brown and Cammell, Sheffield steel makers in 1858. The Bessemer process involved the converter tilting down to pour molten pig iron in through the top, then swung back to a vertical position and a blast of air was blown through the base of the converter, flames and fountains shot out of the top of the converter, the converter was tilted again and the newly made steel was poured out. The first converters could make seven tons of steel in half an hour. The Bessemer steel was used for railways, ships, and bridges. This Bessemer Converter is one of only three converters left in the world. It was used by the British Steel Corporation in Workington until 1974 and produced the last Bessemer Steel made in Britain.
The 1851 Great Exhibition at the Crystal Palace in Hyde Park showcased Britain as the 'workshop of the world', and the triumph of capitalism. At the Great Exhibition, 158 Sheffield companies displayed their wares. Annual steel production grew from 49,000 tons in 1850 to 5 million tons in 1900. The alloy was given pride of place at the Crystal Palace, in the shape of an ingot of Sheffield steel, weighing over a ton.
The most impressive exhibit in the Museum is the River Don Engine, built in 1905, which worked in Sheffield until 1978, first at Cammell's mill then the British Steel Corporation River Don plant. This 12,000 horsepower engine powered a huge rolling mill, made armour plate for the first Dreadnought battleships, and rolled steel reactor shields for nuclear power stations towards the end of its working life. It is the most powerful surviving steam engine in Britain. The Bessemer Converter and the River Don Engine are testament to the Marx and Engels observation that 'the bourgeoisie cannot exist without constantly revolutionising the instruments of production... it has been the first to show what man's activity can bring about. It has accomplished wonders far surpassing Egyptian pyramids, Roman aqueducts, and Gothic cathedrals' (Manifesto of the Communist Party).
The main occupation of working class women in South Yorkshire was in segregated areas doing tedious, monotonous, dirty and dangerous jobs such as feeding spoon blanks through rollers at Mappin and Webb's steel works. In 1911 4.8 million women were working in industry in South Yorkshire, and by 1931 this had risen to 5.6 million. Working class women have always had to work in capitalism. 'Buffing' was a main occupation for women in the steel industry. Mary Dyson was a 'buffer girl' in the 1930s, and later in 1971 as Lady Mayoress of Sheffield, she visited her old workplace, Viners Ltd. She was asked 'Did you enjoy working for us?' and replied  'No! The work was too hard and you didn't pay us enough!'
Sheffield, as a working class Labour city, was fully behind the Labour Party's 'Nationalisation' Clause IV 'to secure for the workers by hand or by brain the full fruits of their industry.'  The Labour Government's 1949 Iron and Steel Act established the Iron and Steel Corporation of Great Britain which was effective in February 1951; the Corporation becoming the sole shareholder in 80 principal iron and steel companies. After 1952 it was returned to the private sector by the Tory Government. With Harold Wilson's 1963 speech on 'the Britain that is going to be forged in the White Heat of Technology' and the election in 1964 of a Labour Government, Sheffield steel workers looked forward to 'nationalisation'. The 1967 Iron and Steel Act established the British Steel Corporation which comprised 90 percent of the UK's steel making capacity, employing 268,500 workers, one of the world's largest steel making organisations.
Nationalisation promised the workers that industry would be 'managed on behalf of the people' but it was state capitalism, the wages system under new management. There was no industrial democracy or workers' self-management. British Steel was a public corporation to manage the industry on a commercial basis, as a profit-seeking business, not as a public service.
With changing market conditions, 'the anarchy of production' (Engels Anti-Duhring) in capitalism makes nonsense of all attempts to plan production, and nationalised industries have to earn a return on capital while competing in the market place. With crisis and recession in capitalism after 1973, and the election of Thatcher in 1979 capitalist re-structuring and de-industrialisation began which involved the closure of steel works, loss of steel jobs, and a rapid contraction of the steel industry. A national steel strike called by the British Iron and Steel Trades Confederation lasted 13 weeks from January to April 1980 but did not halt de-industrialisation. Between 1979-82, 20,000 steel jobs were lost in Sheffield and eventually the British Steel Corporation was 'privatised' in 1988.
Steve Clayton
Posted by Imposs1904 at 1:50 PM No comments: