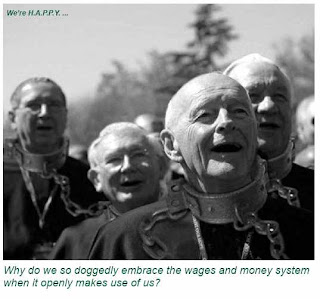 
The following is a transcript of a talk from a recent SPGB Day School.

For some of us our wage slavery can buy us a comfortable, prosperous lifestyle and personally rewarding work; for others it means being discarded; for most of us perhaps it’s something in between. But in any event, the sole purpose of the capitalist system is to make a profit out of us and to accumulate capital, and no amount of TV property programmes, cars, foreign holidays, latte coffee, or shopping makes any difference to that.

A certain proportion of us are able to believe that ‘we’re all middle class now’, because some of us at least can afford to accumulate a certain amount of stuff. But this is an illusion; there is no middle class. We’re all working class in the economic sense that we have to sell our labour in order to live, with the exception, of course, of the small number of capitalists who can live entirely on the labour of others. The rest of us are all, economically speaking, working class by virtue of the fact that we have to let ourselves be used, to sell our labour power, to live.

And yet, how readily we embrace the illusion! From the ‘minnows’ of the Wall Street stock boom in the 20’s to Margaret Thatcher’s new homeowners and the ‘Sids’ of working class share ownership, and now, in Russia, China and India, we reach out again and again in individual aspiration, setting aside the hope of banding together and ending our exploitation. We try to win in the rat race instead of trying to abolish it, thereby ensuring that the capitalist class goes on mining our lives for profit. We are like the credulous ‘natives’ of imperial mythology, marvelling at our handful of pretty beads while the white man robs us of everything.

Our hope has been dashed in so many ways. Hitler, Stalin, Mao and Pol Pot have poisoned our understanding by pasting the word ‘socialism’ onto the very opposite, their barbarous tyrannies. Labour movements have been disabled by the capitalists’ increased ability to move capital and workers round the world. Reformist parties have caved in to the needs of capital to the point of embarrassment. We find dumb serenity staring at a screen or through a windscreen.

Nevertheless, beyond this, I think that we ourselves have been structured to accept this system. One way of looking at the way capitalism has formed us and we form it in turn, is through a consideration of our psychological defences, a psychological term for the means we use to manage our lives in the face of threats to our stability.

We all try to find ways of defending ourselves psychologically. It’s natural and necessary. We couldn’t get through the day if we were constantly overwhelmed by the world, if we were totally impressionable. However, a defence can distort our awareness of reality, in this case, of how we are made use of, and so we shape ourselves to the economic circumstances, in order to be able to tolerate them.

The first means of defence I want to look at is ‘projection’. To project can be to imagine that some outside figure or power possesses something that is part of ourselves. For example, a woman who had an unfriendly piano teacher as a child, might project her love of music into her daughter, and want her to do well. Both she is impoverished by her projections,missing out on an opportunity to be creative herself.

In a similar way, I think that we project our capacities into money, we imagine that money holds great powers, although in reality those powers belong to us.

We have the ability, all of us, working together as citizens of the world, to run the world together democratically, as equals, with no need for money or other forms of domination. But we act as if we don’t. We project our own functions and capacities into money, we attribute those qualities to money and deny them in ourselves. Money is endowed with the same sort of status as a god, it seems to be the source of everything; but of course we are, as the people of the world, self-evidently, the source of everything. Nothing comes from money; money is an agreed convention; it’s a fiction that holds and wields all the power we can’t bear to own. We are like our fictitious piano woman – she could play the piano but she sees all of that in her daughter. The analogy is that we could run the world, but we let money run it instead.

We also project into money our adult capacities and onto money the status of a parent on whom we depend. In relation to money it is as if adults are babies or small children, unable to judge whether we need something or not. It is money, the stern parent, that tells us we can’t have things. This parent can be so stern that for many of us money refuses us enough to eat, refuses us medical care. It can deny us the barest dignity in old age, or even life itself. When we can’t have something we need, we say ‘Where’s the money going to come from?’ And this can apply equally to goods which are, in reality, either plentiful or scarce.

It works the other way too. We assume that our wants are limitless and that, if money weren’t an obstacle, we’d just accumulate things endlessly and not know when to stop. Money then can be an overindulgent parent, that lets us be completely spoilt, that offers us no limits. Money can give us victory over the social and human limitations that come from considering others. If you’ve got enough money you don’t have to give any thought at all to other people, and in this society that’s just about the highest form of freedom we can imagine. When we are living in a wasteful and reckless way, we say ‘We are prosperous now and this is what we want! Nobody can tell us what to do!’
So the centre of decision making is located outside ourselves. If we can’t afford it we can’t have it, and if we can afford it we have to have it.

Money starves us or it fattens us up, but either way, it is money that is in control, enabling our labour to be siphoned off and gathered together as profit.

This oppresses us, but it also frees us of responsibility. If we project our power elsewhere then we are excused the work of taking responsibility for it. Living in a socialist society, having assumed our own power, will indeed be hard work and a lot of it will unfortunately be the boring slog of going to meetings and trying to sort out our relationships with each other socially, and make decisions. In a sense, we don’t want to grow up – far better to leave it to the parents to tell us what to do, while we just gripe from the sidelines.

The second defence mechanism I’d like to discuss is that of ‘identification’. To ‘identify’ means we fuse or confuse our identity with that of another. For example, I might watch a Clint Eastwood film and feel, for a while at least, as if I too am hewn from granite. But it also means the taking in of another person, so that I might recognise enduring traits in me that are like my own father or mother, for example.

In this case of our adjustment to capitalism, we identify with the powerful. We prefer to imagine that we are all pocket capitalists. Instead of recognising that the owners of capital might be using us, we imagine ourselves to be in control, and the owners of capital to be our servants. We think we are sophisticated, knowing consumers who know a bargain when we see one, and companies exist to meet our every caprice and whim, rather than the reverse.

Campaign groups try to publicise the exploitation of suppliers that is the cost of low prices to ‘the consumer’. I wonder whether, identified with the capitalist class, we in some way enjoy supermarkets acting as our agents in pushing other working class people to the limit so we can feel we’re getting a bargain. Isn’t there a seductive joy in being able to feel like the oppressor, like a proxy slave owner with all these poor little people slaving away so we can pick our week’s shopping off the shelves? And what about the fast food customer bullying and patronising the person serving the burgers? Isn’t there an element of acting like the lord of the manor in that behaviour? Isn’t that part of the deal, that you get to boss somebody about?

However, the supermarkets’ own marketing patter describes our slavery accurately enough, though they put it in advertising code . They describe us as ‘discerning consumers with an eye for price’; decoded, that means that we’re broke and overwhelmed with debt. They say we are ‘leading today’s high pressure, busy lives’. That means we’re overworked, sweated labour just like in Dickens’ time, but repackaged as living some kind of exciting fast-lane lifestyle. We’re not even consumers, not really. The capitalist is the ultimate consumer. The cost of our labour is the total value of keeping us going, keeping us fed, housed, entertained and all the rest of it, so low prices in the shops means that we are cheaper too. The rich are sophisticated consumers of our labour and they certainly know a bargain when they see one.

My argument, in short, is that we are characterologically adapted to the capitalist system; that we feel no need to get rid of it because of the firmness of our defences against knowing just how merciless it really is. How could it be otherwise, when we have created it and lived in it for so long? This view has the virtue of explaining why we stubbornly hold onto this exhausting, murderous society of rich and poor, user and used; but I can see how it might appear to be a pessimistic outlook.

However, I don’t think it is. It seems to me that that hope lies in a paradox here; paradoxically it is in admitting our slavery that our freedom lies.

Our difficulty is in realising that, no matter how seductive the consumer society is, we are still wage slaves, and our lives are lived, as Fromm says, ‘for purposes outside ourselves’. And it seems to me that if enough of us were to face up to that seemingly unbearable fact, and start to take back our capacities and set about using them, then that could be the beginning of the end for capitalism. It could also be the beginning of a completely new system, where our common purpose is the fullest development of every single person in the world.
Peter Rigg
Posted by Imposs1904 at 1:14 PM No comments: