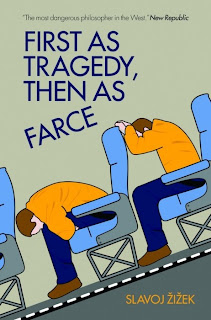 Book Review from the February 2010 issue of the Socialist Standard

First as Tragedy, Then as Farce by Slavoj Žižek. Verso, 2009.

Has Slavoj Žižek (the superstar Slovenian “theorist”) signed a piece-work contract with Verso Books? One can’t help wondering because this slim volume brings his tally with that publisher alone to around 21 titles. This Stakhanovite output would be more impressive were it not for his notorious habit of recycling old material, like any good stand-up comedian does.

This two-chapter book is no exception: Žižek seems to have rapidly assembled it by combining his favourite quotes and theoretical hyperbole with some recent news stories from the unfolding economic crisis.

The first chapter (lamely entitled: “It’s Ideology Stupid!”) promises a “diagnosis of our predicament, outlining the utopian core of the capitalist ideology which determined both the crisis itself and our perceptions of and reactions to it.” Setting aside the question of whether ideology can determine a crisis, Žižek does at least provide some valid observations on capitalist ideology’s aims to shift the blame for a crisis away from the capitalist system itself. Yet few of his ideas strike the reader with much force of insight or novelty; and the chapter is haphazardly organized – as if Žižek’s only aim was to squeeze in as many of his treasured anecdotes as possible.

The second chapter (“The Communist Hypothesis”) lays out some of the “communist” ideas that have seasoned Žižek’s recent books. He dances around the question of how to define “communism”, however, choosing instead to locate the “set of antagonisms which generates the need for communism”.

That is at least a start, the reader might think, as it is true that communism (socialism) is not some abstract, ethical ideal, but rather the real solution to problems that cannot be resolved under capitalism. If the problems (or “antagonisms”) of capitalism are clearly explained, the nature of communism – as the solution – will in turn come into view.

But any initial hope that Žižek will eventually explain “communism” dissolves as soon as he unveils those “antagonisms,” said to be: (1) “the looming threat of an ecological catastrophe”; (2) “the inappropriateness of the notion of private property in relation to so-called “intellectual property”; (3) “the socio-ethical implications of new techno-scientific developments (especially in biogenetics)”; and (4) “the creation of new forms of apartheid, new Walls and slums” (author’s italics).

What clear image of communism can possibly emerge from such an overly specific – and basically random – list of contemporary problems?

Žižek tries to avoid getting entangled in his own antagonisms, so to speak, by asserting that the fourth one (also referred to as the separation between “the Excluded and the Included”) is “qualitatively different” from the other three, which would somehow “lose their subversive edge” without it. Of course, Žižek might have defined that key antagonism more precisely as the class division between capitalists and workers – but where’s the fun in that?

The ambiguity of the fourth antagonism allows the author to bend it to his will, in a way not possible with a clear concept like “class”. In particular, it allows Žižek to insist on the (false) distinction between “communism” and “socialism,” condemning the latter for wanting “to solve the first three antagonisms without addressing the fourth”. On that basis Žižek says that socialism is no longer the “lower-phase” of communism (as Lenin had asserted to first introduce the false distinction), but rather the “true competitor” and “greatest threat” to communism.

Given his astounding indifference to what communism actually means, it is no surprise that Žižek cannot fathom workers consciously aiming for a new form of society. The task for his brand of revolutionary is not to explain to fellow workers what communism is, why it is necessary, and how it might be achieved, but rather “to wait patiently for the (usually very brief) moment when the system openly malfunctions or collapses, have to exploit the window of opportunity, to seize power – which at that moment lies, as it were, in the street”.

Žižek insists (repeatedly) that he takes such ideas seriously – even ending the book by advising fellow intellectuals that it’s “time to get serious once again!” – but he is careful to insert just enough ambiguity and humour in his hard-as-nails Leninism to free himself from any real responsibility. Unfortunately, more than a few leftists (including the ageing “New Leftists” at Verso Books!) take Žižek’s “communist” ideas seriously, which only shows how misunderstood communism (socialism) is today.
Michael Schauerte
Posted by Imposs1904 at 3:41 PM No comments: 
Attempts to reform capitalism, whether through parliament or dictatorship, have failed. This leaves conscious majority revolution as the only way forward.

Long before capitalism had emerged as the dominant social order and imposed its exploitive social conditions on the working class that it had created there arose within the minds of human beings the dream of a life beyond mere survival. The dream of a freedom and dignity beyond that of some category of slave to a privileged hierarchy that controlled their means of life.

The triumph of capitalism and its ongoing development – what Marx referred to as the opening of the womb of social labour – gave strength and reality to the dreamer; opened new vistas of potential wealth and social development. Entirely new social relations nourished a new reality in which a literate and articulate working class would emerge to challenge their masters.

In the degrading squalor of 19th century capitalism men and women began debating the substance of their puny dreams; people became politicised to the extent of demanding some amelioration of their miserable conditions as well as an input into the political system that governed their lives. The working class had its martyrs who won for us the rights – limited and reversible – that obtain today within the politics of capital and labour.

Alternative system
By the mid-19th century the pioneers of the early socialist movement, and especially Karl Marx, had subjected capitalism to a rigorous investigation and exposed the fact that, while its role had been historically progressive and while it retained a capacity for improvement, it was now a reactionary system of social organisation. Not only was it based on the exploitation of the proletariat, the producers of all real wealth, by a minority parasite class but it had created, and must retain, a political system that stood between the working class and its social emancipation.

Marx did not draw up a detailed blueprint for a socialist society because such a detailed picture of socialism was dependent on the state of development of capitalism at the time of the perceived social revolution nor could he presume the democratic decisions of a socialist conscious majority following the conquest of power. More pertinently, by exposing the processes whereby capitalism carried out its exploitation of the working class he clearly laid down markers as to what would not exist in a socialist society.

As history rolled over into the 20th century there was a widespread understanding of the meaning of socialism among those elements of the working class who were politically aware. Large sections used the term socialism in the sense in which Marx had used them, viz: a world community in which society as a whole would own and democratically control its means of life: where money, wages and class would not exist and the principle underpinning the production and distribution of wealth would be, ‘from each according to their ability and to each in accordance with their need’.

Dissent among socialists was not about the nature of socialism but about the best way of achieving it. Unfortunately, this question created a graveyard of broken hopes and disillusionment. The story of those hopes and their failure has been well documented in this journal over the decades and it is not the purpose of this article to re-visit the arguments or draw personal blame for the events of the past. 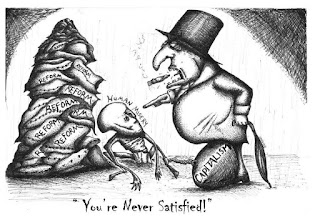 Reform policies
There can be no doubt that the real casualty of the errors and internecine disputes of the past has been socialism itself. As just pointed out, aside from the means of its achievement, there was wide consensus among those calling themselves socialists as to the nature of socialism. At that time socialists and their organisations did not offer reform policies as an end in themselves but rather as strategies that would lead to the eventual overthrow of capitalism and the establishment of socialism. Among some parties it was even customary to post socialism as the core objective together with a panel of what were called 'Immediate Demands'.

Those who founded the Socialist Party opposed this view; we argued that our socialist objective imposed its own means of achievement; that socialism could only be brought into being and could only continue to function on the basis of its conscious acceptance by the widest possible majority of society – which meant, effectively, the working class. The task of the socialist political organisation was, therefore, to promote an understanding of socialism to the end of taking political control away from the capitalist class and instituting a system of common ownership rooted in democratic control.

The basis of our argument was that the material conditions for socialism existed now but it could only come into being when the working class had matured politically to the point where it could commit itself not only to its rights within the new society but, also, to its responsibilities. Leading the workers along the path of reform was not equipping them for their historical revolutionary role but was in fact establishing the contrary idea that capitalism could be made to function in the interests of the class it exploited.

Socialism today
Earnestly, we can say now, we wish we had been wrong in our analysis of the situation. We wish the British Labour Party and the Social Democratic parties elsewhere who made up the Second International and their myriad of Left-wing supporters had succeeded in chipping away at the fortress of capitalism, had demolished it and created a sane socialist society.

We wish that despite the lack of the material and ideological conditions for socialism in Russia in 1917 the Bolsheviks had performed a social miracle and that Russia and its satellite imitators had not become brutal totalitarian states where the case for socialism was treason.

We wish, too, that when we propagate socialism today we were not confronted with the argument that the awful things that happened in Russia (before that country abandoned state-organised capitalism in favour of a property-owning bourgeoisie) had something to do with socialism.

Similarly, we wish that the appalling record of failure, treachery and authoritarianism which has become more and more the political stock-in-trade of British Labour and kindred parties in Europe was not still perceived by some people as having some association with socialism.

On another plane, we wish that our class brethren were emancipated from the fetters of leadership and authority, an aspect of class society severely adopted and promoted by the disparate organisations of ‘the Left’. People who know what they want and how to get what they want do not need leaders. History, especially the history of our class, is littered with evidence of the treachery and deception of leaders; the very concept is a heritage from the various forms of class slavery in which mental servitude is an important social suppressant.

As someone remarked at the beginning of the French Revolution of 1789, “The great only appear great because we are on our knees; let us rise!”
Richard Montague
Posted by Imposs1904 at 12:32 PM No comments: