The Labour Party and the Bomb - Part Two

The Labour Party and the Bomb - Part One

The following You Tube video is part one of four clips from a Socialist Party talk that dates from June 2005, and which took place in Central London.


The subject of the talk is 'Double-Dealing Defence: Labour and the Atom Bomb', and was part of a Day School entitled, 'The Post-War Labour Government: Hope and Deception'.

Even today, Labour Party supporters on both the left and the right of the Party will insist that Clement Attlee's administration of 1945-51 was the radical force for good that more than any Government before or since pushed forward British society in a socialist direction.

From the famous old Herbert Morrison quote of "Socialism is what a Labour Government does when it is office" to John McDonnell recent pronouncement that the Labour Party is historically the "Party of Peace", it is a myth that refuses to lie down.


This talk by Richard Headicar, and a further talk, 'How Labour Governed: 1945-51', by Steve Trott, from the same day school, that I will post later in the week, will go some way in stripping away the myth that the Labour Party was ever historically a party of socialism, peace and the working class.

Further Reading:
SPGB pamphlet dating from 1946 Is A Labour Government The Way To Socialism? 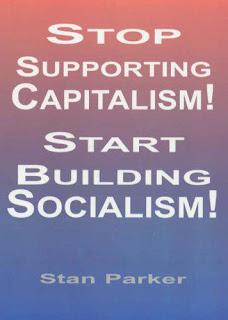 
What is the best medium for putting to people the case for a society of free access? Many things have been tried. The Socialist Party has been doing it through the pages of the Socialist Standard for nearly a century. Dozens of Party pamphlets - and many more leaflets and manifestoes - have been produced. Countless public meetings have been organised and addressed. But only in very recent times have we seen the case for socialism being expressed in full-length book form. If we exclude from this category Robert Barltrop's 1975 book on the Socialist Party, The Monument, on the grounds that it was as much a personal reminiscence as a exposition of the socialist idea, it is only in the twenty years or so that we have seen writers producing books which attempt to make a detailed case for socialism seen as a wageless, moneyless world system characterised by free access to all goods and services, socially co-operative work and democratic administration. This was discussed in the final chapter of State Capitalism: The Wages System under New Management by Adam Buick and John Crump in 1986 and in the chapter on the SPGB in Non-Market Socialism in the Nineteenth and Twentieth Centuries in 1987. In 1988 and 1994 Ken Smith wrote Free is Cheaper and The Survival of the Weakest, in 1990 and 1997 Melvyn Chapman wrote Money and Survival and The Universal Impediment, in 2000 Dave Perrin wrote The Socialist Party of Great Britain: Politics, Economics and Britain's Oldest Socialist Party, and in 2001 Ron Cook wrote Yes, Utopia! We Have the Technology. Now, in 2002, the latest in this 'series' has appeared, Stan Parker's volume entitled Stop Supporting Capitalism! Start Building Socialism! (Bridge Books, Wrexham, 176pp).

Parker's approach is to divide his book into two major sections, the first subtitled 'Capitalism' the second 'Socialism', and within these to discuss what he sees as the major aspects of both systems. So in the 'Capitalism' section he first describes how early primitive communities not based on wage labour, money and exchange gradually transformed themselves into socially and economically hierarchical societies culminating in modern capitalism. He then looks at the first thorough analysis of capitalism carried out by Marx in the nineteenth century before examining various modern views of capitalism put forward both by its supporters and its opponents and assessing the effects of some of the different ways of running capitalism that have been tried (e.g. 'Free Market or State Control?'). He ends this section with comment on recent developments within capitalism, in particular so-called 'globalisation', information technology and the rise of environmental problems and 'green' politics.

In the 'Socialism' section Parker looks both backward and forward. He traces the trajectory of socialist ideas from notions of social equality that surfaced during the Peasant's Revolt and again in the 17th century with the Diggers and the Levellers, through the early 19th century practice of such figures as Robert Owen and Saint-Simon, to the fully-fledged thought of Marx and Morris at the end of that century. He then differentiates the reformism that is often called 'socialism' today from the real substance of socialism, which involves not cumulatively reforming capitalism but actually getting rid of it and is therefore by definition revolutionary. The rest of this section and of the book is devoted to chapters explaining the meaning of the various terms often used to describe how a socialist society will be organised - common ownership, production for use, democratic control, free access - and suggesting ways we can organise now in order to move towards the achievement of that society.

It is these chapters that I found most successful, in the sense that, if I were not already a socialist, I would, I think, be more persuaded to become one by what Parker has to say about how socialism will be organised and can be achieved than by the case against capitalism in the first section of his book, which, while excellently documented and referenced, is somehow not clearly and fully argued out on its own ground. What is especially attractive about the last few chapters is that they present a hard-headed yet optimistic appraisal of the benefits and the problems of organising a society based on production for need. The same can be said of the author's view on the prospects and the timescale for achieving Socialism. There is perhaps something of an irony here, for, while more than once denying the usefulness of trying to present any kind of detailed description of a socialist society, there is a certain human warmth about the author's brushstrokes which for me actually manage to paint such a picture more successfully than those who have actively attempted it in the past.

There are some aspects of Parker's book which will provoke critical discussion in the socialist movement. Some will see an over-emphasis on a 'reformist' rather than a revolutionary Marx, some will find the author too dismissive of the role new technology can play in the establishment and running of a new society, and some will criticise his apparent relegation of the trade unions in capitalism to a simple agent of reformism. However socialists will applaud most of what they read and find new information and new angles on issues they are familiar with. His analysis of what an old Socialist friend of mine used to call capitalism's "head-fixing machine" is outstanding as is his take on the "human nature" issue, where he draws on the work of a psychologist who argues that human nature is often one-sidely evoked "to explain selfishness rather than service, competition rather than cooperation, egocentricity rather than apathy" and concludes that "social structures predicated on human selfishness have no claim to inevitability". Parker's arguments about the reasons for capitalism's tenacity, based on compliance rather then active support and a "there is no alternative" view of the world, are compelling too. And, as he says, perhaps the most difficult thing to imagine about socialism is a society which will bring "not only the socialisation of the means of production but also the liberation from the millennia-long habits of dependence and submission".