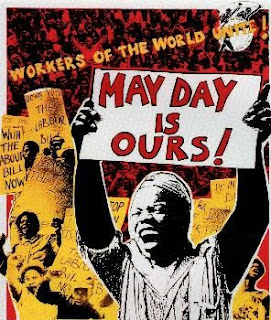 Cross-Posted from the Socialism Or Your Money Back blog

The First of May is the day when the workers’ movement celebrates its internationalism, and affirms the unity of their class across all boundaries. The Socialist Party of Great Britain celebrate the day in those terms. But the tradition has been debased by modern realities.

Mayday as a cultural event seems to be dying. It has become increasingly dissociated from the cultural horizon of the vast majority of the working class. If they demonstrate on Mayday at all it is for the wrong motives. Mayday has fallen into the hands of the Labour hierarchy and its trade-unionist minions, and has become a celebration of their organisations, a day for Labourite triumph and self-congratulation, an act of lick-spittlery, and kow-towing to their political masters .The reason why Mayday has become dissociated from relevance and meaning to most working class lives is that the bodies associated with it, and with the whole way of life it typifies, have become divorced from the lived and meaningful experience of most workers. The process is one of continual removal of the working class from any real control over their own economic lives, alienating institutions they created into state domination. As such people become increasingly alienated from the cultural manifestations of workerdom, enabling Labour and their union lackeys to make Mayday their day.

However, all need not be lost. Remembering that 364 days a year belong to their employers, workers can take steps towards wrenching Mayday from the grasp of alienated union officialdom, and making Mayday our day once more.Mayday belongs to the workers. Although that means admitting that the rest of the year belongs to the capitalists it also means that we know who we are.That Mayday is commemorated by workers across the globe reminds us that we have a world to win and that we can win it.The task confronting us is to build up a union of the working class, organised to put an end to the property system that divides and oppresses us.

“The true engine of job creation will always be America’s businesses”, declared President Obama in his State of the Union message (London Times, 29 January). We don’t know about the “always” but will let him off because he presumably thinks that capitalism will always exist and, on this assumption, he is right. As long as capitalism lasts the engine of job creation will be business, not just in America but everywhere.

Not that the aim of businesses is to create jobs. That’s only incidental to their aim of making profits. Since profits arise out of the unpaid labour of those who actually provide wealth, making profits involves employing workers. In short, job creation is a by-product of profit-creation.

When business is booming, i.e. when good profits are being made, more jobs are created. But it works both ways. When business is not booming then jobs are destroyed and unemployment grows, as has been happening for the past couple of years. In recent months the economy (as measured by GDP) has begun to grow again slowly in the major capitalist countries, so employment should increase too. But will it? In America there’s talk of a ‘jobless recovery’:


“in which GDP growth is not matched by a larger workforce as employers extract more labour from their existing employees rather than take on new recruits.” (LondonTimes, 12 February)

That’s one way of describing increased exploitation for those with a job.

Obama went on “but government can create the conditions necessary for businesses to expand and hire more workers.” This in fact is the economic rôle of governments under modern capitalism: to try to create and maintain conditions for businesses to expand, i.e. to make more profits from which to accumulate more capital. It doesn’t always work and it brings governments into conflict with the majority wage and salary working class as it means giving priority to profit-making over meeting people’s needs. So, governments oppose strikes, urge (and sometimes impose) wage restraint, and cut back services to keep taxes down.

But can’t governments also “create jobs”? Yes. They can either directly by themselves taking on more workers or indirectly by increasing their spending on goods produced by businesses. This has eventually to be financed out of the wealth created in the business sector and so has its limits (if carried too far it reduces profit creation and so job creation too). In this sense government jobs are ultimately dependent on business activity.

In the present crisis the government has borrowed extensively to bail out the bankers. Sooner or later this borrowed money will have to be repaid. Given the limits as to how far taxes can be raised, this means the government cutting back on its spending. Already observers are suggesting that this could mean a ‘jobless recovery’ in Britain too, with GDP going up without unemployment going down. A report in February by the Chartered Institute of Personnel and Development “indicated a worsening outlook for workers and jobseekers, despite tentative growth in the economy”, and “said that there was more pain ahead for workers as savage cuts start in the public sector” (London Times, 15 February).
Posted by Imposs1904 at 8:33 AM No comments: