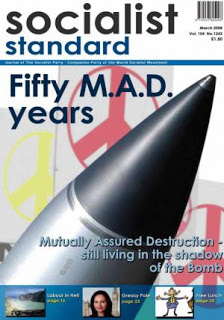 "They never freed us. They only took the chain from around our neck and put it on our ankles." Anti-apartheid activist Rassool Snyman to Naomi Klein.

The fight against the system of racial segregation and white supremacy called apartheid ("apartness" in Afrikaans) was one of the great liberal and left-wing causes of my generation. It was a fight not only for political democracy in South Africa but also for socio-economic reform.The Freedom Charter, adopted by the African National Congress in 1955 (www.anc.org.za), called for "restoring national wealth to the people" (understood as nationalization of the mines, banks and "monopoly industry"), "re-dividing the land among those who work it to banish famine and land hunger," improved pay and working conditions, free healthcare, universal literacy, and decent housing for all.

Apartheid as a political and legal system was dismantled in the early 1990s. South Africa's capitalists did not on the whole object. Apartheid had brought them immense profits from the exploitation of a cheap captive labour force. But it had its drawbacks. By denying training and advancement to a large majority of the workforce, it created a growing shortage of skilled labour. Capitalists are often willing to accept a measure of social change, provided that they can set its limits.

Little change
Although apartheid is gone, economically South Africa is still one of the most unequal countries in the world. Almost all the land, mines and industry remain in the same (mostly white) hands. Almost half the population lives below subsistence level. Unemployment is widespread; children scavenge on dumps and landfill sites from sunrise to sunset seven days a week. Life expectancy is falling (a drop of 13 years since 1990) as AIDS, drug-resistant TB and other diseases spread.

Even segregation still exists in practice. The wealthy take shelter in "gated communities" from the violence pervading the shantytowns. As the wealthy are no longer exclusively but only predominantly white, the proper name for this is class rather than race segregation.

True, efforts have been made to improve living conditions. Close to two million new homes have been built. (Whether they count as "decent housing" is another matter.) Water, telephone and electricity networks have been expanded. But while millions were rehoused, millions were also evicted for rent arrears.

Nine million people were connected to the water supply, but during the same period ten million were disconnected as the price rose out of their reach.

Caught in a web
How did the main reform goals of the Freedom Charter come to be abandoned? Political journalist William Mervin Gumede tells the story in his book Thabo Mbeki and the Battle for the Soul of the ANC (Cape Town: Zebra Press 2005).

While political negotiations, conducted in the glare of publicity, moved the ANC toward government office, parallel and almost unpublicized economic negotiations, led on the ANC side by Thabo Mbeki (now president), ensured that when the ANC did take office it would be unable to act against white business interests. A new clause of the constitution made all private property sacrosanct. Power over economic policy was ceded to an "autonomous" central bank and international financial institutions.


"The ANC found itself caught in a web made of arcane rules and regulations… As the web descended on the country only a few people even noticed it was there, but when the new government … tried to give its voters the tangible benefits they expected the strands of the web tightened and [it] discovered that its powers were tightly bound"(Naomi Klein, The Shock Doctrine pp. 202-3).

Relentless pressure
The ANC hierarchy came under "relentless pressure" from local and international business, the (business controlled) media, foreign politicians, the World Bank and IMF, etc. It was "an onslaught for which the ANC was wholly unprepared" (Gumede, p. 72). This does not mean that crude demands and threats played a crucial role. It was a process more of seduction than intimidation, aimed at integrating a set of new partners into the institutional structure and social milieu of the global capitalist class.

This meant providing opportunities for ANC officials to go into business or train at American business schools and investment banks. Leading figures were lavished with hospitality:


"Harry Oppenheimer [former chairman of Anglo American Corporation and De Beers Consolidated Mines] was eager to entertain Mandela at his private estate, while Anglovaal's Clive Menell hosted him for Christmas (1990) at his mansion . . . While separated from his wife, Mandela's home for several months was the palatial estate of insurance tycoon Douw Steyn . . . His daughter Zinzi had a honeymoon partly financed by resort and casino king Sol Kerzner, and Mandela spent Christmas 1993 in the Bahamas as a guest of Heinz and Independent Newspapers chairman Sir Anthony O'Reilly." (Gumede, p. 72).

It seems churlish to begrudge Mandela a little luxury after 27 years in prison. But what were his benefactors' motives?

The markets: stern taskmasters
Nevertheless, the most effective form of capitalist influence was the impersonal pressure of "the markets." As Mandela told the ANC's 1997 national conference: "The mobility of capital and the globalization of the capital and other markets make it impossible for countries to decide national economic policy without regard to the likely response of these markets" (Klein, p. 207). And the markets punished the slightest sign of deviation from the "Washington consensus" with capital flight and speculation against the Rand.

Mbeki was the first to grasp what was needed to win the markets' confidence. Precisely in order to live down its "revolutionary" and "Marxist" past, the ANC leaders had to prove themselves more Catholic than the pope. "Just call me a Thatcherite" – quipped Mbeki as he unveiled his new "shock therapy" programme in 1996.

South Africa could not afford the protectionist measures with which Malaysia, for instance, warded off the Asian financial crisis of 1997. Orthodoxy, however, was never rewarded with the hoped-for flood of foreign investment. The markets are stern taskmasters: they demand everything and promise nothing.

A sell-out?
It is not altogether fair to say that Mandela or Mbeki "sold out." They simply saw no escape from the "web" spun by global capital. Indeed, at the national level there is no escape. Reformers in other countries, such as the Solidarity movement in Poland and Lula's Workers' Party in Brazil, have gone through much the same experience on reaching office. Socialists have long said that socialism cannot be established in a single country. Now we also know that under conditions of globalization even a meaningful programme of reform cannot be implemented in a single country.

Capital is global. That is its trump card against any attempt to defy its dictates that is confined within national boundaries. The resistance to capital must also be organized on a global scale if it is to have any chance of success.
Stephen Shenfield
Posted by Imposs1904 at 2:21 AM No comments: