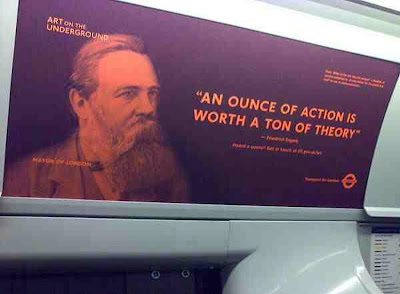 Londoners and visitors to London may have noticed last year a big poster of Engels on the Underground next to a quote, allegedly from him, that “An ounce of action is worth a ton of theory”. No source is given. Which is not surprising since this is not a quote from Engels but a long-standing English-language proverb that has been mistakenly attributed to him. It has also been attributed to Ralph Waldo Emerson, Lenin and Gandhi.

It's first recorded use dates from 1748 when Jared Eliot, a New England clergyman, wrote in Essays upon Field Husbandry that “It used to be the Saying of an old Man, That an Ounce of Experience is better than a Pound of Science.” (See link here.)

But it is all over the internet as something Engels said, usually without a source. The more serious collections of quotes give the source as a book published in 1975 by Reg Groves entitled The Strange Case of Victor Grayson, which presumably is the earliest attribution their researchers have found. Groves was a pioneer British Trotskyist, expelled from the Communist Party for Trotskyism in 1932.

In fact Groves does not actually say that Engels said this but is even slightly interrogative and rhetorical. What he wrote was “and did not wise old Frederick Engels once say: An ounce of action is worth a ton of theory ?” (chapter II, p, 115). He gave no source for his supposition.

It probably wasn’t said by Lenin either but it does appear in an article in the Weekly Worker, the paper of the Communist Party of Great Britain, on 13 February 1925 by T. A, Jackson as “An ounce of practice is worth a ton of theory“ (See link here.)

Jackson (incidentally an SPGB renegade) didn’t attribute it to anyone. He was well read and was probably just using an old proverb he felt appropriate to his argument (summed up in the next following sentence: “A successful stand of the workers in any given factory will prepare them more for a united stand of all the factories in an industry than years of theoretical preaching”.)

It is not surprising that Trotskyists like this saying as it well expresses their theory and tactic that it is not worth trying to put the straight socialist case before the working class (as we do) as this is too theoretical for them; workers, according to the Trotskyist theory of ‘transitional demands’, can only learn by experience, the experience of fighting for reforms within capitalism and learning that capitalism cannot grant these reforms; at which point they are supposed to turn to the Trotskyist vanguard party and follow it in an armed uprising against the capitalist state. Hence their conclusion that what socialists should be doing is not putting the case for socialism, but proposing attractive reforms for the working class to follow. It is an argument for a reformist practice.

Weekly Bulletin of The Socialist Party of Great Britain 144

Welcome to the 144th of our weekly bulletins to keep you informed of changes at Socialist Party of Great Britain @ MySpace.

"These bastards who run our country are a bunch of conniving, thieving, smug pricks who need to be brought down and removed and replaced with a whole new system that we control." Michael Moore, 2003, Dude, where's my country?