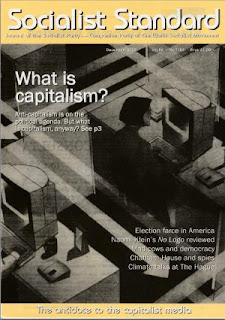 "Anti-capitalism" has become a popular slogan, and a good thing too. But if this is to have a positive impact people have to be clear as to what they mean by capitalism

To put our cards on the table straightaway, what we mean by capitalism is an economic system where productive resources are used as "capital", i.e. they are used to produce more wealth with a view to profit; this sets in motion an impersonal and uncontrollable economic mechanism which leads to the accumulation, in fits and starts, of more and more capital, of more and more wealth used to produce further wealth with a view to profit. Capitalism is, then, a system of capital accumulation. Hence, of course, its name.
Not just a market economy
This is not how defenders of capitalism like to portray things. Many shun the c-word and talk instead about a "market economy". To most people a market is a friendly place where you buy things you need so the term "market economy" is employed so as to conjure up the idea of an economy geared to serving consumer demands.

It is possible to envisage such an economy on paper but it would be vastly different from capitalism. It would be an economy of self-employed farmers, artisans and shopkeepers, each producing a particular product which they would exchange on the market, via the medium of money, for the products produced by the others which they needed. There would be no profit-making, no exploitation and no accumulation, just independent producers exchanging their products for their mutual benefit.

The farmers, butchers, bakers, candlestick makers and others would be producing their particular products which would sell at a price reflecting the average amount of time required to produce it. There would be no profit and no exploitation because everybody would be receiving the full value of what their labour had produced. They would just be exchanging so much labour in one form for the same amount in a different form.
Marx called such an economy "simple commodity production" (a commodity being, for him, an item of wealth produced for sale), but it is doubtful whether it has ever existed in a pure form. The nearest that may have come to it would have been in some of the early colonial settlements in North America, but even Adam Smith writing over two hundred years ago in 1776 assumes an economy in which there is already production for profit and accumulation.
Capitalism is indeed a market economy, but not a simple market economy. A key difference of course is that under capitalism production is not carried out by self-employed producers but wage and salary workers employed by business enterprises. In other words, under capitalism, the producers have become separated from the means of production. This makes all the difference. The producers are now not bringing to market what they have produced (that belongs to their employer, the owner of the means of production) but only their working skills, so they receive the value not of their product but only of their ability to work, which is less. The product is still under normal circumstances sold at its full labour-time value but the proceeds go not to the direct producers but are pocketed by the owners of the means of production. Profit is the difference between this and what they pay, as wages and salaries, for the working skills they purchase on the labour market.
Production for profit
So capitalism is not a simple market economy. Marx explained the difference well when he said that what happens in a simple market economy is that the producers brought to market a product of a certain value which they sell for money in order to buy another product or products of equal value. The economic circuit is commodity-money-commodity (C-M-C), the aim being to end up with a basket of useful things. Under capitalism the economic circuit is different. A capitalist sets out with a sum of money which they use to buy commodities (factory buildings, raw materials, working skills) that can be used to produce other commodities with the aim of ending up, after these other commodities have been sold, with more money than they started off with. So the circuit is now money-commodities-more money (M-C-M').


One danger is that the anti-capitalists will be diverted into campaigning to try to put the clock back by returning to the simple market economy that may have existed in early colonial North America. This is an important strand in Green and anarchist thinking as exemplified by the slogan "small is beautiful". We are offered the idyllic picture of an economy of self-employed smallscale producers producing for a local market or of an economy composed entirely of LETS schemes. This wouldn't be capitalism but it wouldn't be possible either, if only because enough to feed, clothe and house the world's present population would not be able to be produced on this basis.
More sophisticated Green thinkers, sensibly, don't want to go that far. What they advocate is a steady-state market economy, a variant of Marx's "simple reproduction". The idea is that the surplus would be used not to reinvest in expanding production, nor in maintaining a privileged class in luxury but in improving public services while maintaining a sustainable balance with the natural environment. It's the old reformist dream of a tamed capitalism, minus the controlled expansion of the means of production an earlier generation of reformists used to envisage.
But it is still a dream because it assumes that a profit-motivated market economy can be tamed, and made to serve human and/or environmental needs. History has proved that it can't be; capitalism has shown itself to be an uncontrollable economic mechanism which operates to force economic actors to make profits and accumulate them as more and more capital irrespective of the consequences. This mechanism first came into operation in the 16th century and since then has spread to dominate the whole world in the form of the world market. Capitalism today could in fact be described as the profit-motivated, capital-accumulating world market economy.
Other anti-capitalist protesters see this fact that capitalism is a world system as being the problem and the solution as being to break it up into separate capitalisms operating within national frontiers behind protective tariffs walls. This hardly justifies the description "anti-capitalist" of course, and parallels a nasty strand of nationalist thinking which has always associated capitalism with a sinister "cosmopolitan" conspiracy. Indeed, the danger is that, in the absence of being presented with a credible alternative, it is here that the "anti-capitalist" protests will find the loudest popular echo. The US labor unions took a nationalist line in Seattle and in Britain the Green Party has already endorsed the reactionary "Save the Pound" campaign.
So, given that anything that rejects technology and the existence of one world is a non-starter, what is the credible, viable alternative to capitalism as a world system of production for profit and uncontrolled and uncontrollable capital accumulation? It's where all the productive resources of the Earth have become the common heritage of the people of the world—"make the Earth a common treasury for all", as Gerrard Winstanley put it right at the beginning of capitalism—so that they can be used, not to produce for sale on a market, not to make a profit, but purely and simply to satisfy human wants and needs in accordance with the principle of, to adapt a phrase, "from each region on the basis of its resources, to each region on the basis of its needs".
Adam Buick
Posted by Imposs1904 at 3:42 PM No comments: