Perhaps the most famous of scientific frauds was the fake Piltdown Skull of 1910, a “missing link” fabricated by a person unknown. That anonymous joker put together an ape’s jaw with a human skull. Desmond Morris has grafted the most ignorant fairy tales about human society onto a body of basically sound ideas about human biological evolution. The Naked Ape is a barefaced hoax.

As a gimmick, Morris pretends to describe the human animal just as it would be pictured by a zoologist if it were a newly-discovered species. “Naked ape” is a clinical term (like “black-footed squirrel”) which is supposed to denote men’s most noticeable characteristics: their lack of fur. But evidently, Morris has become a rich man because to millions of his readers, nudity is a novelty. It should be obvious that the most important thing about human animals is not that they are naked, but that they are clothed. In other words, they produce what they consume; they turn the artificial into the necessary, and (like Morris) sometimes confuse it with the natural.

His book is a hymn of praise to modern capitalism. All the current practices, preoccupations, superstitions, myths and manners are, according to Morris, highly admirable. Furthermore, they are natural because they stem from man’s past as a wolf-like, monogamous, predatory killer. 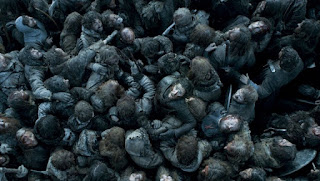 From the September 2019 issue of the Socialist Standard

(From “Living the Dream’, publication for this year’s Socialist Party Summer School.)

Game of Thrones, the telly series, has finished. Mercilessly hyped on media and billboards, it was, for eight seasons, a cultural phenomenon. It broke out of the normal nook the fantasy genre occupies, and became a smash hit. Part of its attraction was the fact that its creator, George R.R. Martin, used the real world history of the English ‘War of the Roses’, and bloody incidents in Scotland to shape its narrative.

What it meant was that millions of people enjoyed the depiction of a libidinous, transgressionly incestuous and ruthless violent medieval world. It was, in fact, merely another piece in a long line of fictional depictions of feudal life that stretch back as far as Shakespeare. For Shakespeare, it was Spain and Italy that were the imaginary bastions of the by-gone era of Catholic superstitions, lusts and excessively passionate ways. For Game of Thrones, it is a fantasy world with real dragons. For the capitalist class, it is the past.

The secret history of the revolutionary ways of the city dwellers, and how they overcame the martial classes of the feudal nobility lives on primarily in these fictional displays. Official history is one of gentle and reasonable progress: enlightenment values overcoming the dark superstitions of the medieval world revealing the natural order of good commerce and individual aspiration. The memory of the events that inspired the modern world, the ideas, practices and institutions against which the modern ideology defines itself live on in fiction.

Indeed, and . . . spoiler alert: the series ends with the end to the Game of Thrones: the Iron Throne is melted, and the Lords of Westeros agree to elect a ruler from among their own number, rather than have the hereditary King. This is the liberal fantasy, a revolution without mass participation with just enlightened realisation of rulers that merit matters more than birth. That it leaves the existing elite in place is an added bonus. It is this denouement that is the fantastic core of the series, more than the magic and the dragons.

In much of the world’s imaginary, today, ‘medieval’ is a synonym with brutality, lawlessness and bloodshed. In Martin’s world, rulers deal out immediate bloody justice with swords. Much as, in the real world of today, many Arab and Islamic states retain the rough and ready systems of recently feudalistic/tribal arrangements. For some on the right, that is why Islam fitted neatly into pre-existing prejudices as a sort of feudal mirror image to define themselves against, to continue the fight that began so many hundred years ago.

The memory of capitalist revolution does not just live on the right, though. The left remembers the revolutions, and those memories structure what is expected of a revolution: mass crowds on city streets, barricades, committees of public safety. The battle remains against kings and courtiers. The intellectual equipment of the modern revolutionary is geared towards fighting the last war, not the future one.

The socialist revolution won’t be the same as the capitalist (bourgeois) ones, we are sure of that: we can’t simply lop off a crowned head to win our victory. We need to help protect ourselves by dispelling the ghosts of feudalism. Firstly, by looking for, and at, how the class struggle worked under feudalism not as partisans for the then contending classes but as partisans of the working class. The bourgeoisie’s (broad sense) fight against lords and kings is not our fight. Simply ridding the picture of the medieval world of caricature and understanding how the people who lived then were like us – rational human beings living in particular economic and social circumstances – is a big step to getting rid of ideological shackles.

Millions of people, for centuries lived quiet and orderly lives in feudal society, the cherry-picking of the massacres and murders that punctuated that world plays a large part in how the modern capitalist class and its apologists define themselves against the feudal world.

Violence was common, after all, society was ruled by a martial class (and it is arguable that peasants also could be viewed as a martial class, given how many of them went to war for excitement and largesse). The bourgeoisie, were decidedly not a martial class. As David Graeber notes in his book Debt: the First 5,000 years, capitalism emerges as a social form through the alliance of the martial and commercial classes (in the form of colonialism and mercantilism). When the bourgeoisie first tried to rebel, they found the vigorous feudal lords waiting on the battlefield to slaughter them.

Taking a sideways step allows us to see the bourgeoisie’s class struggle, and its methods as being part of their situation and time, and allows us to pick at our differences in situation to see how our revolution will be different.

This is not to repeat the old mechanical schematics of one class surpassing another until the inevitable end of history comes into play, but, rather, to look at how one set of struggles against oppression and exploitation lead to new circumstances and new forms of exploitation. This is the approach William Morris took in his novella A Dream of John Ball. He imagined himself back in the time of the Peasants’ Revolt, and drew out the commonalities between the struggle of Wat Tyler’s peasants and the workers of his own day. It is not the inevitable end point that matters, but the constant human character and yearning for self-development and identity in the differing material circumstances.

At the moment, socialism and socialist revolution are fantasies, fantasies that are as much in dialogue with history as they are with the circumstances of the world around us. We cannot begin to free ourselves, until we know what we want: and fantasy helps define that. We need to know what our fantasy is, so that we can begin to try and make it a reality, and some future George R.R. Martin or some future William Morris will write in turn about our dreams. The Game of Votes, perhaps?
Pik Smeet
Posted by Imposs1904 at 11:13 PM No comments: