From the June 2009 issue of the Socialist Standard


Politics has become a dirty word, but that’s because we leave it to professional politicians.

Most political groups today use the word “socialism” to refer to a brand of Leftist politics advocating things such as nationalization of industries, higher taxes for the rich, greater participation of trade unions in government, more spending on social programmes, and greater control of the economy by the state. These so-called socialists of the Left, in common with all the other political parties of the Right and the Centre, look at all the world's problems – hunger and malnutrition, poverty, unemployment, epidemics, war, genocide – and they tell us none of them can't be solved by putting them in charge of the system. If only they could change the laws, set the budgets, and liaise with the other world leaders, they say, things would be better. And so we vote these politicians into power – again and again and again – and still, over the decades and centuries, the problems are still with us.

However, the Socialist Party is not a party of the Left, and doesn't advocate any of their political reforms. When we talk about socialism, we mean one thing and one thing only: a world-wide, democratically organized system of society without states, leaders, markets, and money. We believe that society at large, not governments or a small minority of private owners, should own and control the means of producing and distributing wealth. We believe that production of goods and provision of services should take place not for profit but rather directly to satisfy human needs. We believe that labour should be voluntary, not coerced, and that people should have free access to the goods produced by society. This isn't the mere tinkering with taxation and budgets and laws which is all the other political groups want to do---what we want is a fundamental, revolutionary change in the way society is organized.

What exactly do we mean when we talk about the means of producing and distributing wealth being owned in common? By “the means of producing and distributing wealth”, we’re not talking about personal possessions like your house or your clothes or your toothbrush. Rather, we’re talking about the forests, farms, mines, and oceans from which natural wealth is extracted; the factories in which it's processed; the transportation networks, such as roads and railways, that carry these goods across the Earth; and the distribution centres, such as warehouses and department stores from which we collect these goods for our own use. Currently, all these things are owned and controlled by a tiny minority of the world's population. If these owners can't find out a way of turning a profit out of the sale of the goods, then they don't get produced or distributed, no matter how much people need them. This is why millions of people all over the world have little or no access to the food, water, medicine, and shelter they need to stay alive. It's not because we lack the resources or the capacity to produce these things, but because it's not profitable to do so.

On the other hand, capitalism seems to be very good at churning out loads of goods that nobody needs at all. Instead of finding out what it is that people need and then producing the goods to meet that need, a large part of energy in our present society is focussed on coming up with all manner of new gadgets, gimmicks, and other shoddy merchandise, and then convincing people that they need them. The entire system is back-to-front! You just can't walk down the street today, or turn on the television or radio, or open a newspaper or web page, without being constantly bombarded with billboards, commercials, banner ads, inserts, leaflets, coupons, sandwich boards, posters, stickers, infomercials, and spam, all trying to convince you that you need to buy whatever hyped-up product du jour they're flogging. A lot of the time these products are of such inferior quality that they don't work as advertised, or end up breaking after a few months or years.

In a socialist society, though, all the means of producing and distributing wealth would be democratically owned and controlled by society at large. That means that every one of us would have the right to participate in decisions about how to organize the production of goods and services. And in any sane technologically advanced society, there is no reason why the sole object of production would not be simply to meet people's self-determined needs with the very best goods we know how to make. This would entail an end to buying, selling and money. We already have the resources and the technology to supply every single human being on this planet with all the material goods that they need for a comfortable, pleasant, enjoyable life. All we lack is the system of society that would permit this to happen.

So how do we establish this new system of society? The Socialist Party does not believe in achieving socialism through coercion or through violent seizure of power by a revolutionary vanguard. That's no basis upon which to build a fair and democratic society. No, the only way that socialism as we understand it could be set up and run is through the consent and cooperation of an overwhelming majority of the world's population. And the only way we will know once there is such a majority is when it says so via the ballot. It is then, and only then, that we will know that the time is ripe for socialist revolution. It is then that we can start dismantling the coercive machinery of government and start taking control of the things we need to make society function in our own interests.

Capitalism cannot meet the needs of the majority of the people in the world. It does not today, and it never can, no matter how much well-meaning politicians might try to make it. Rather, we are asking you to understand and agree with our analysis of why the world is the way it is today, and why the entire world-wide system of capitalism needs to be replaced with socialism.
Tristan Miller
Posted by Imposs1904 at 5:13 PM No comments: 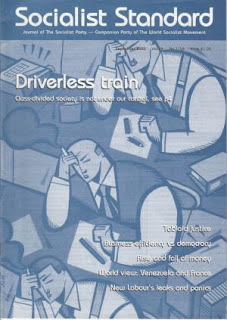 From the September 2000 issue of the Socialist Standard


Many people mistakenly believe that money has always existed and that it therefore always will. We explain why money is out of date.

Many people think that money has always existed and therefore it always will. Wrong.

It wasn't paradise, because food was scarce, and growing communities were eventually forced by this scarcity into a competitive struggle for life.

First came the invention of agriculture, and the consequent need to defend the land, or property, on which crops were grown.

Although this gave communities more stability and growth, agriculture and animal husbandry could not by themselves supply everything which they needed to develop as cultures. For this they needed to associate with other communities and pool their resources. But in the new culture of property there was never again to be such freedom to take whatever was available.

And so began the exchange of products known as trade. And although some quite advanced bronze age societies managed to trade very well by using barter (e.g. the Egyptians), it was a supremely awkward way to conduct transactions. With the advent of the Iron Age, cheap metal was for the first time plentiful, and coinage was slowly introduced to facilitate the trading process.

Civilisation has since grown up on the back of this trade, whose sophistication was made possible by the invention of money. To the modern mind therefore, civilisation relies on money. This is a misunderstanding. In fact, it is only trade which relies on money. Civilisation relies on distribution of material goods certainly, but distribution is not the same thing as trade, just as give is not the same thing as sell. Modern industrial society has given us the means to free ourselves forever from that scarcity which has always dogged our forebears. Money is no longer a necessity or logical feature of society, and only a tiny minority benefit from its presence.

In history, many things become out of date, like the steam engine or quill pens. Money is about to join them.

Money today
Money is indispensable to the capitalist system, but this system is not indispensable to human society. Money as a universal means of exchange represents capital. The possessing of money enables the buyer to acquire goods and services (commodities) and the seller to dispose of goods and services. The key resource that is bought and sold is human labour power—the ability to transform initial wealth (resources, raw material, etc) into more wealth.

We live in a society where almost everything is bought and sold. That which you need to live is a commodity, you must buy it from someone who will make (or at least expect) a profit out of selling to you. It is our passport to existence in capitalism. Not only does the movement of products from producer to consumer come to be mediated by money, but the value of a product comes to be judged not in human terms but in terms of a sum of money.

A high proportion of employment in capitalism consists of handling money in some way. There are hundreds of occupations that would not exist in a society that had no need for money: they range from accountants, bank and insurance staff, salespeople, wages clerks to name only some of the more numerous occupations. Tangible products needed only in a money system include bank notes and coins, account books and invoices, meters, safes and many others.

Capitalism as a market system means that the normal method of getting what you need is to pay for it. The normal way for members of the capitalist class to get money is to invest their capital to produce rent, interest, dividends or profit. The normal way for workers to get money is to sell their labour power for wages, salaries, commission or fees. If they are unable to find employment they depend on state or other handouts. The result is poverty in the midst of potential plenty—actual plenty only for the privileged minority.

Socialism: a moneyless society
Socialism means a world society based on production solely for use, not profit. It will be a classless society, in which everyone will be able to participate democratically in decisions about the use of the world's resources, each producing according to their ability and each taking from the common store according to their needs.

In such a society there can be no money—or, more precisely, no need for money. Money is only needed when people possess, and most do not.

Imagine that all the things you need are owned and held in common. There is no need to buy food from anyone—it is common property. There are no rent or mortgages to pay because land and buildings belong to all of us. There is no need to buy anything from any other person because society has done away with the absurd division between the owning minority (the capitalists) and the non-owning majority (the workers).

The ending of the money system will mean at the same time the ending of war, economic crises, unemployment, poverty and persecution—all of which are consequences of that system.

The revolutionary change that is needed is not possible unless a majority of people understand and want it. We do not imagine all humankind's problems can be solved at a stroke.

Reforms of the present system fail because the problems multiply and recur. It will take time to eliminate hunger, malnutrition, disease and ignorance from the world.

But the enormous liberation of mental and physical energies from the shackles of the money system will ensure that real human progress is made.
Stan Parker
Posted by Imposs1904 at 7:39 AM No comments: