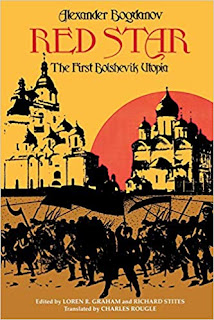 From the April 2007 issue of the Socialist Standard

The terms "Bolshevism" and "Leninism" are usually treated as synonyms. In view of Lenin's enormous influence over the Bolshevik party, that might seem fair enough. But in fact Lenin did have political and intellectual rivals inside his own party. The most important of these non-Leninist Bolsheviks was Alexander Bogdanov (1873—1928).

Bogdanov was a man of many talents and interests. His formal training was in medicine and psychiatry. He invented an original philosophy that he called "tectology" and is now regarded as a precursor of systems theory (synergetics). He was also a Marxian economist, a theorist of culture, a popular science fiction writer, and of course a political activist. Even today most of his work is not available in English. The only book devoted to him is Zenovia Sochor's study of his ideas about culture (Revolution and Culture: The Bogdanov-Lenin Controversy, Cornell University Press 1988).

A volume of Bogdanov's science fiction has, however, appeared in English (Red Star: The First Bolshevik Utopia, translated by Charles Rougle and edited by Loren R. Graham and Richard Stites, Indiana University Press 1984). Here we have two novels set on Mars (Red Star and Engineer Menni), a poem "A Martian Stranded on Earth," and interpretative essays by each of the editors. Red Star recounts how Martians take the Russian Bolshevik Leonid to their home planet to learn about the communist society there and act as a link between earth and Mars.

Engineer Menni is also set on Mars, but at an earlier stage, shortly before the transition from capitalism to communism. Menni's mission in life is to design Mars' great canals - it was widely believed at the time that there are canals on Mars - and organize and manage their construction.

Thus Richard Stites speaks of his "celebration of technocratic power [and] the technical intelligentsia." On the surface this assessment seems justified. Engineer Menni was popular among Soviet planners at the time of the first Five Year Plan, and Menni is certainly a heroic figure with whom any aspiring technocrat might readily identify.

But you do not have to search very hard to find evidence that suggests a different assessment. In Red Star Bogdanov presents communist Mars as a society beset by serious problems - by no means a utopia. Technology is a major source of these problems. Leonid discovers, for instance, that some workers are so mesmerized by the machinery they operate that they refuse to stop working and have to be forced to rest. And Nella, Menni's abandoned lover, sings a song in which she complains that for all his virtues Menni is lacking in compassion:

"His heart is of ice, no pain does it feel
For the creatures brought low by Fate . . .
The tears of the wretches cast into the fray
Warm not his heart of stone."

The Martian political system portrayed in Red Star - little explicit detail is provided - does indeed seem to be technocratic rather than democratic. Thus, the speakers at a conference convened to consider Martian colonization of earth are an astronautical engineer, a physician, and a mathematician (who argues in favour of annihilating all earthlings and is later killed by a distraught Leonid). Martians in managerial positions move around in flying "gondolas" that do not seem to be available to ordinary Martians. (If they were, air traffic control would be a nightmare.) This is not a society that I would wish to call socialist or communist even though the exchange of commodities has been abolished and production is for use.

In Engineer Menni we find a clue as to why the revolution has given birth to a technocratic society. A workers' delegate at a trade union congress bemoans the fact that the workers' ignorance prevents them from judging matters for themselves and puts them at the mercy of experts, whom they have no choice but to believe.

Technocracy or socialism?
Both Bogdanov's fiction and his political writings as presented by Sochor suggest that he expected the coming revolution against capitalism to lead to a technocratic society. This was because the workers lacked the knowledge and initiative to seize control of social affairs for themselves. One reason fort his situation was the hierarchical and authoritarian nature of the capitalist production process. Another was the hierarchical and authoritarian mode of organization of the Bolshevik party, although Bogdanov considered such organization necessary and inevitable - he was a Bolshevik, after all.

This, however, was not a prospect that Bogdanov welcomed or idealized. He knew that real socialism (or communism) could only be a fully democratic society. And he knew that only a highly cultured and knowledgeable working class could achieve real socialism. That is why questions of culture and education were so central to his thought and work. The emphasis on knowledge and understanding as prerequisites for real socialism (as opposed to technocratic pseudo-socialism) is common ground that he shares with us in the world socialist movement.

While Bogdanov remained loyal to the Bolshevik regime in Russia until the end of his life, his ideas were deeply subversive of the society over which that regime presided. Bogdanov's ideas were the inspiration for a dissident group called "Workers' Truth" that was active for a time in the early 1920s (although it appears that Bogdanov did not have personal ties with them). In their manifesto, "Workers' Truth" declared that the old bourgeoisie had been replaced as masters of production by "the technical intelligentsia under state capitalism"; the Communist Party had become the party of this intelligentsia, which was the nucleus of a rising new bourgeoisie.