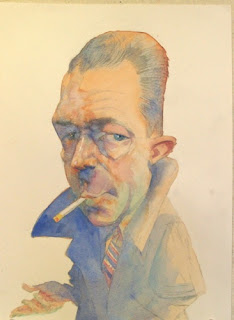 From the November 1973 issue of the Socialist Standard

Albert Camus was born sixty years ago this month (7 November 1913) in Algeria, the son of European working-class parents. After his father's death, his childhood was spent in one of the poorer districts of Algiers, but he was a promising student and entered the University of Algiers in 1932 to study philosophy. Two years later he joined the Communist Party, but broke with it by 1937 (at the latest). His first published work, a play, appeared in 1936, and from then on he devoted himself mainly to journalism and literature, publishing his first novel, The Stranger, in 1942, together with other plays and collections of essays. His poor health prevented him from playing an active fighting role after the outbreak of war in 1939, but Camus joined the Resistance and edited the important underground journal Combat, a job he held till 1947. In that year he also published The Plague (in which the pestilence is used as a symbol both of Nazism and of evil in general: he concludes that the way to fight it is by "doing one's job well"). A long political essay, The Rebel, appeared in 1951, followed by another novel The Fall in 1956. In 1957 Camus received the Nobel Prize for Literature: the citation stated that he had illuminated "the problems of the human conscience in our time." In January 1960 he was killed in a road accident.

Two factors in the historical background of Camus' productive life are crucial to understanding his work. One is the Algerian "independence" movement, the other is the Cold War. It was against the backcloth of the latter, that the quarrel between Camus and the "Marxist" Jean-Paul Sartre took place. They had been friends since 1943, but became increasingly estranged from 1948 on, and the final split came with the publication of The Rebel, which coincided with the Korean War and a fierce anti-Stalinism in the West. Although Sartre had earlier condemned, for instance, Russian labour camps (and indeed published a report on them), Camus now charged him with following a Stalinist line; Sartre replied that Camus' views were irrelevant to contemporary realities, and that Frenchmen concerned with oppression should turn their attention in the first place to France's own colonial policy.

It should be remembered at this point that Camus had been born and brought up in a French colony, though he regarded himself as a Frenchman and a European. His relationship to the non-European world is certainly an important theme of his writing (though perhaps not as overwhelmingly so as Conor Cruise O'Brien would have us believe in his stimulating book 'Camus'). There is no doubt that he took a pro-colonialist stand on the Algerian question, stating (in 1957, three years after the outbreak of war in Algeria) that he would defend his mother before he would defend justice, thus implying support for the French army's actions - an acceptance of violence which was radically at odds with the position he took up in The Rebel. And he did not live to see the eventual withdrawal of French forces and the establishment of an "independent" Algerian Republic.

Probably the most important remark to be made about Camus is that he is a great novelist. Nevertheless, he also chose to be a political critic, and it is this aspect of' his work that is of greatest interest to Socialists. His major contribution to political thought is The Rebel, the purpose of which he describes as being "to accept the reality of today, which is logical crime, and to examine meticulously the arguments by which it is sustained; it is an attempt to understand the time I live in." He discusses the ideas of such various "rebels" as de Sade, Nietzsche, Saint-Just, Hegel, Marx and Lenin, among others, and argues that what they lack is a concept of "limits", of moderation which he sees as being central to a true rebellion in the modem world: "Moderation is not the opposite of rebellion, Rebellion in itself is moderation . . . Moderation, born of rebellion, can only live by rebellion." The main target of Camus' attacks is; 'Communism", which, in that it aspires to world empire, is thus more dangerous even than Nazism. "Revolt," he says, "has become of the alibi of new tyrants."

In spite of this attack on what he took to be Marxism in practice, Camus writes not uncharitably of Marx himself, and makes some valid points with regard to same of Marx's "followers". He writes for example that "the Marxists who have made history" have made their revolutions "in the exact circumstances under which Marx had foreseen that a revolution could not take place." His views on Lenin are also of interest: Leninism, he says, owes as much to Bakunin as to Marx, and from the moment that Lenin formulated his theory of the vanguard party, "the proletariat no longer has a mission. It is only one powerful means, among others, in the hands of the revolutionary ascetics." Camus also deals with Lenin's The State and Revolution, which he calls "the strangest and most contradictory of pamphlets." Commenting on Lenin's remarks concerning management by the state of the "Socialist economy", Camus continues:


"The provisional State of Marx and Engels is charged with a new mission which risks prolonging its life indefinitely. Already we can perceive the contradiction of the Stalinist regime in conflict with its official philosophy. Either this regime has realised the classless Socialist society and the maintenance of a formidable apparatus of repression is not justified in Marxist terms, or it has not realized the classless society and has therefore proved that Marxist doctrine is erroneous and, in particular, that the socialization of the means of production does not mean the disappearance of classes."

Unhappily this reference to "socialization of the means of production" in Russia only reveals the extent of Camus' confusion about Socialism. While presumably aware that Russia in 1917, like China in 1949, was an example of "the exact circumstances under which . . . a revolution could not take place", he does not seem to doubt that Socialist society has been established somewhere. Even so, he realizes the importance of accumulation even under what he calls "collectivity", saying that the need to accumulate causes the postponement of "justice" for a later date. And at one point he writes of "a kind of state capitalism", adding that "justice and abundance" will ensue once this is "put to the service of the community" (shades of Lenin's statement that Socialism was "nothing but state capitalist monopoly made to benefit the whole people"). All of which shows an amazing muddle-headedness and inconsistency.

But it is in what Camus himself advocates that the shallowness of his thinking is clearest. The closing pages of The Rebel are written in a lofty but empty rhetoric which all but obscures Camus' own proposals. His main idea seems to be the relationship between means and ends:


"Does the end justify the means? That is possible, But what will justify the end? To that question, which historic thought leaves pending, rebellion replies: the means."

He has earlier quoted with approval Marx saying that "An end which requires unjust means is not a just end", so, to this writer at least, he appears to be arguing that provided the means are acceptable, the ends may practically be left to look after themselves. (The ends he envisaged are left unspecified : even the vaguely anarchist standpoint which Camus occasionally approaches says next to nothing about the kind of social system he believed in. He does, however, believe that "The real and inhuman excess lies in the division of labour.") The rebel, he says, can never find peace, since he can neither absolutely renounce killing and lying nor agree to kill and lie: "He knows what is good and, despite himself, does evil."

It would be unfair to Camus to point to this last sentence as a suitable epitaph for him. Nevertheless his pro-colonialist views, his support for one of the sides in the inter-capitalist dispute known as the Cold War, and his ambivalent attitude toward the Arab population of Algeria do mark him out as a man who, and it gives us no pleasure to write this, came down on the side of the pestilence which is capitalism.
Paul Bennett
Posted by Imposs1904 at 1:32 PM No comments: