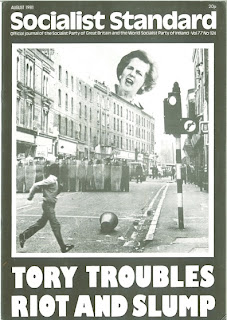 Bristol, Brixton, Southall, Toxteth, Moss Side, Wood Green, Woolwich, Brixton again . . . A wave of civil disturbances has erupted in England. As livelihoods go up in flames and mindless destruction explodes on the streets, there is a stampede on to the political stage from both wings by politicians and assorted spokesmen. They hold forth loudly to the audience—the “general public”—about what must be done. They shake their fists and point angrily at each other. They make ominous warnings and each tries to win the support of the audience with promises to carry out the right policy. Political commentators arise and plaintive vicars descend to offer their planned remedies in the din.

A stern attitude has been struck by the government: “the law must be upheld, people must be protected” said Margaret Thatcher in her recent broadcast. Such a kind concern for people’s welfare doesn’t exactly square with her policy of closing down emergency casualty departments in hospitals and spending milions of pounds on murderous armoury, but then consistency is not one of her strong points. The Home Secretary, William Whitelaw, is planning measures to suppress the street violence. He advocates the use of water cannon, CS gas and increased power for the police to enable them to arrest anyone found in the area of a disturbance. He suggests that parents of those on the rampage should be punished for not controlling their children. There have also been cries from Conservative quarters to bring back the birch and to introduce the Army to “pacify” civil disorders. The idea behind these sorts of proposals seems to be that if some people become so frustrated with the dehumanising lifestyle which capitalism imposes on the majority that they rebel violently, then you have to teach them that violence is wrong and immoral. And the way you must teach them that violence is wrong and immoral is by beating them with truncheons and spraying them with gas.

On the other hand, supporters of the Labour Party argue that the real causes of the disorders are the reactionary economic policies of this Conservative government. Inner city decay, urban deprivation and high unemployment are all identified as precipitating the riots and the Tory administration is held responsible for having bred the causes. It is true that the economic policy of this government has done much to exacerbate living conditions for many in the working class, but this government has not caused the problems of unemployment and inner city decay and its removal and replacement by a Labour administration will not solve the difficulties of life in the profit system. Not so long ago there were less than half a million unemployed in Britain. Now there are almost three million living on the dole. There are approximately 30 million workers registered as unemployed across the continent of Europe, in countries operating a great variety of economic and political administrations of capitalism from totalitarian state control to “liberal democracies” with comparatively low degrees of state intervention in the economy. The evidence is clear enough that the trend of high unemployment, during periods of glutted production for the market, is one which moves on largely unaffected by the different economic schemes used in running production for profit. Similarly, the urban deprivation of places like Brixton, Toxteth and Moss Side was not something which grew out of the paving stones after May 1979 when the Tories won the General Election. Squalid housing and unemployment are problems which have been developing for decades and which successive Labour governments have been unable to alleviate. The recent spate of civil violence is the tip of an iceberg of discontent and frustration and it is a delusion to imagine that the problems which face us—the working class—can be eradicated by Labour plans to provide more employment (more exploitation) and more second-rate housing.

Supporters of left-wing organisations like the Socialist Workers Party have been greatly enthused by brick-throwing at policemen, which is somehow regarded as the kind of anti-establishment action of which revolutions are made, or at least from which they can be begun. The attempts to manipulate this collective aggression and stoke up more disturbance are made by ambitious crusaders who believe that if they could be elevated to positions of power on the shoulders of the angry masses, then they could charitably set to work on implementing revolutionary policies for the good of those who know no better than to oppose capitalism with damage and injury. As people who declare their support for the working class, those left-wingers have an offensively patronising view of the capacity of workers to reach socialist consciousness.

A similar enthusiasm for the rioting has been shown by the various extreme right-wing organisations like the National Front who, like the Left, regard the fury of the riot as fertile ground from which to recruit violent rebels. The nature of the political philosophy of parties like the SWP and the NF, and the degree to which the role of the rank and file membership is simply to put forward the changing slogans of the leaderships, means that enrolment to membership can be based on having yo” or “The Blacks”.

The first riot in Southall was different from the others. The violence began there when several coachloads of racialists were ferried into the area, ostensibly to attend a pub concert. Shops owned by Asians were damaged and the proprietors assaulted. The violence was committed amid barked racialist slogans and provocative Sieg Hiels. Local Asian residents managed to organise themselves against their aggressors while the police had taken almost their entire force away to another district, allegedly on a tip-off. In all of the other riots in London, Liverpool and Manchester, black and white workers were in the broil together. They were not race riots but poverty riots. Poverty, that is, both of wealth and ideas. The riot in Southall did not rage because local black and white residents found it impossible to exist peaceably side by side. It was fomented by violent thugs imported for that purpose. And to those who insist that there will always be an underlying tension when different cultures exist in the same district, let them travel to somewhere like cosmopolitan Kensington in London and witness how privileged “Englishmen” have no resentment living in the same community as wealthy Arabs and Nigerians and Iranians. They have no poverty to blame on anyone, and must feel quite safe so long as we blame ours on each other.

Priests and vicars have not been slow to get off their knees to give vacuums of sympathy to victims of violence and sinister warnings to the sinners. The practicality of their advice in the aftermath of the violence is well summed up in the words of the Archbishop of Liverpool, the Most Reverend Derek Worlock, who after the destruction in Toxteth proclaimed “Out of the ashes of these last days must come new life and new hope.” But then if you believe that the ultimate control of the affairs of mankind lies with a force beyond the skies, what else can you offer those suffering from socially produced hardship, but hope?

In certain degrees of poverty, especially at a time of economic crisis when there is no hope on the horizon, pent up frustration will be likely to burst into violence among those who have not considered the cause of their problems and sought to remove it. The dashed hopes and bitterness of most of those in the recent upsurges were not so much to do with the conditions of employment as the condition of unemployment. Hundreds of thousands of young members of the wealth producing class have left school in recent years to go directly on to the dole queue. The feeling of rejection and uselessness which this creates contributes to their resentment of their environment. In Toxteth, to take one example, with thousands of young people leaving school, significantly just about the time the riots broke out, the local career office was offering only 12 jobs. In the city of Liverpool, according to the latest unemployment figures, 81,000 people were chasing 1,019 job vacancies. Other factors like aggressive policing and routine stop-and-search tactics will have obviously aggravated the tensions.

The fact that the bursting frustration and desperation expresses itself in the ferocity of the riot is understandable. Capitalism is a social system which is shot through with everyday forms of “respectable” and institutionalised violence from the teacher’s cane and the policeman’s truncheon to the government’s tanks and bombs. From the most lighthearted comic book to the late-night documentary on the brutalities of Northern Ireland or Afghanistan we are confronted with images of violence as a method of trying to cause social change. The deeds of those participating in the riots were thoughtlessly destructive. Cars, shops and homes of fellow members of the working class were irrationally ruined. It was a foolish misdirection of anger.

Where do we go from here? It is possible for capitalism to attempt to quell the areas of extreme deprivation by pumping money into housing, industry and welfare for the poverty to become just endurable. The riots which broke in southern America in the late 1960s had their immediate causes treated with giant expenditure on welfare relief payments to the poorest families and training programmes for ghetto youngsters. The profit-system will not be burnt away, neither will it be dislodged or smashed with bricks. A few riots, even large scale rebellions, can easily enough be quashed by the authorities, and usually the rioters will be in a worse condition after the insurgence than before it. But, to borrow from Friedrich Engels, there is no power in Britain which could for a day resist the British working class organised as a body.

The 50 Years Ago Column in the December 2007 Socialist Standard

The sound made by the Sputniks is, in fact, not of man triumphant over nature but of one nation gaining prestige against another. Nobody knows whether Sputniks are weapons or not, but that isn’t the point anyway. The big bangs, the bomb tests and the other push-button horror displays are the nations making muscles, like boys preparing for a fight that each hopes to scare the other out of; and now the Russians have made the biggest muscle of all, the visible proof of incredible technical development.

The implications go farther than to America and Britain. The “uncommitted” nations – i.e., those which have not declared or had to give allegiance to the western powers or to Russia – have to take notice. The Sputniks, flashing in the Russian shop-window, have made the American one suddenly dull by comparison. The conception of Russia as a backward, semi-barbaric nation has been pushed aside for one – equally mistaken of a great atomic-age civilization. Inevitably the competition has intensified: America now must have satellites at all costs. Did any space-fiction writer envisage a race to the moon?

There is, indeed, kudos to Russia all along the line, most of all because the Anniversary celebrations served to underline the fact that there were only forty years between the fall of the Czars and the launching of the Sputniks. To keep things in perspective, it should be realized that the development of Russia has been only that of a huge nation in the upsurge of capitalist growth. Within the limits of an earlier time, the growth of Britain in the nineteenth century was equally remarkable; or Germany between 1870 and 1914, from a collection of three-halfpenny states to a great power.