A Brief Sketch of the Materialist Conception of History. - Part 7 (1925) 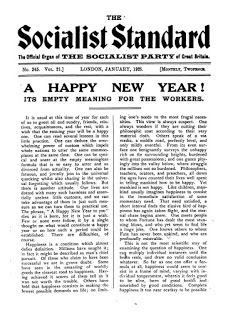 From the January 1925 issue of the Socialist Standard

Part 7
It will be noted that in this sketch we have taken a few examples from past history to show how our theory of historical development fits the facts. But it equally applies to the history of our own times. For, manifold though the changes are that economic development has brought into being, the foundation of human society is still an economic one; only man’s way of dealing with the fact has changed. The production and distribution of wealth is still of primary importance to human society Hence the changes that have occurred in recent years in the means of wealth production and distribution can be said to be the underlying cause of many modern historical events. The late European War is one outstanding example. Unlike the small, self-supporting nations of feudal times, the leading nations of to-day are more or less politically and economically interwoven with each other. Particularly all countries are more economically interdependent than, say, a hundred years ago. Thus a general economic development in one country will make its effects felt nearly the world over. So vast had been the economic development of Germany from the time of the Franco-Prussian War of 1871, up to a few years prior to 1914, that the German ruling class becoming a standing menace to the interests of the ruling class of this and other countries. The war was the direct outcome. Of course, the usual “lofty ideals" were paraded by the rival groups of capitalists as one means of urging the workers on to the slaughter. But whilst Great Britain entered the war on the plea of “ the defence of small nations,” the real reason for her entry was the desire to crush a serious commercial rival, and thus retain for herself a large control of the world’s markets. And similar motives actuated all the countries who participated in that “holiest of holy wars.” That the underlying cause of the war was an economic one, and not the so-called racial differences as was said during the war is now more or less openly admitted by all.

In conclusion.
Some years ago Marx’s son-in-law Paul Lafargue, in explaining the “Historical Method of Marx,” well said, that in formulating that method Marx had placed at our disposal a “tool,” “an instrument of research.” The need for the use of that tool still awaits recognition by the great bulk of the working class, for it is in the hands of the workers that it will prove most useful for the progress of human society. In other words, besides being an instrument of historical research it is an instrument of their emancipation from wage slavery. Besides providing them with the understanding of the rise of mankind from their low beginnings in savagery up to our own civilisation, the rise of class society, slavery and the State, our view of historical development provides an understanding of the basis and movement of modern society. The conditions engendered in capitalist society already indicate the form of the society of the future. Social ownership and control of the resources of wealth production and distribution is pointed to as the next stage in social evolution. Let the workers then grasp a knowledge of the materialist conception of history. They will then use that knowledge in harmony with that economic development that has, in the main, made possible their freedom from capitalist domination. They will change the form of society in harmony with their requirements by establishing Socialism. With that accomplished the economic forces of society “which have hitherto ruled man ” will become more and more consciously under the control of mankind. “Only from that time,” says Engels, “will man himself more and more consciously make his own history—only from that time will the social causes set in movement by him have in the main and in a constantly growing measure, the results intended by him. It is the ascent of man from the kingdom of necessity to the kingdom of freedom.”
Robert Reynolds
(Conclusion.) 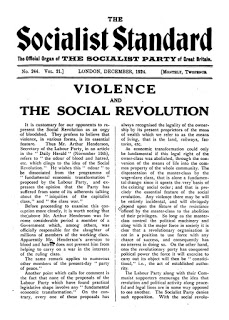 From the December 1924 issue of the Socialist Standard

Part 6
Since the whole history of the State shows that the ruling class of any given period use the State machinery as a means of safeguarding their material interests, to the detriment of the subject class, the struggle of the classes necessarily takes the form of a political struggle—a struggle for the control of the means of life through the control of the State. Only by this means is a ruling class to be dislodged from power, and a new form of society established. Revolution, then, in a society comprising different classes, is an essential part of the process of social change; it is inevitably implied in the evolution of the tools of wealth production and distribution, and the need for revolution arises when a certain stage in economic development is reached. The revolution has to be carried out by the rising subject class in order that old and obsolete social institutions which do not conform to the requirements of that class may be destroyed.

It will be gathered from what we have said that the class struggle has a materialistic basis. But this is often obscured in great historical events by the “idealism" displayed in the struggles. The abstract ideas of justice, freedom, humanity, etc., have at all times been invoked as weapons in the struggles. So much so, in fact, that many who have looked back upon past history have regarded the “idealism" as though it were independent of material causes. There could be no greater mistake. To take the French Revolution of 1789 as an example. That revolution was in reality the result of a struggle between the ruling feudal nobility and clergy and the then rising capitalist class. In that struggle for power the rising capitalist class, who saw in the domination of the nobility the means of hindering their advancement, found it necessary to seek the support of the peasants and propertyless workers of France. All sorts of promises were made to obtain that support. Since the peasants and workers were likewise groaning under the tyranny of feudal rule, the promises made, together with the great rallying cry of the bourgeoisie for “ Liberty, Equality, and Fraternity," met with response from the “lower orders.” But the slogan of “Liberty, Equality, and Fraternity” turned out to be no more than a reflection of the desired political and social tights of the bourgeoisie. As far as the peasants and proletarians were concerned, they had merely assisted in substituting one set of rulers for another.

So we could continue, in speaking of other revolutions, to point out that, although disguised by religious or secular idealism, the struggles have been between classes for social supremacy. Whilst the class struggles of the past have resulted in the overthrow of one class by another, and thus class society has been perpetuated, the modern class struggle must of necessity end in the abolition of classes. Social development has so simplified the class divisions in modern society that now only two classes face each other in society, with only one class needing emancipation—the working class. With the triumph of the working class, the slave class of to-day, society will witness the winding up of class society and human slavery.

Let us now sum up our sketch of that theory of history formulated by Marx, Engels, and Morgan. We have seen that the materialist conception of history regards the changes that have taken place in the forms of Society as being mainly caused by the changes in the means of wealth production and distribution. Or as Morgan would say, the upward march of mankind is largely to be explained by “their successive arts of subsistence."

We have also seen that these economic changes, though brought into existence by man himself acting upon his natural surroundings, so alter the conditions of human existence, that mankind are more or less compelled to shape their mode of living accordingly. Further, we have pointed out that our view of historical development is not so one-sided as to exclude from human history every other factor than the economic one. Man's ideas and ideals, his geographical and climatic conditions, are all embraced by our conception of history, and placed in their true position. The influence of ideas in historical development has engaged most of our attention in this sketch, for the reason that, it is upon that side of our theory that most criticism has been levelled. Since the influence of geography and climate has only been implied by us here and there, it may prove useful if we have a few words to say about these before concluding; if only to show that Marx was not unaware of their influence on human society. Whilst we assert that the economic development is the motive force behind social change we are, at the same time fully aware that geographical and climatic conditions form part of the background, so to speak through which many of man’s technical inventions have taken form. Thus the needs for making fire, clothes and shelter must have arisen when our primitive ancestors emerged from the tropical or sub-tropical forests on to the open plains, where they were more at the mercy of climatic conditions. Hence the invention of the crude technical appliances of that time to overcome the climatic conditions. But even when we reach more modern times, when man had enormously increased his hold upon natural forces, we observe the influence of geography and climate. In dealing with the question of the physical conditions more or less essential to the capitalist form of society in its early stages, Marx, in the following lengthy but luminous passage, says :—


Capitalist production once assumed, then, all other circumstances remaining the same, and given the length of the working day, the quantity of surplus-labour will vary with the physical conditions of labour, especially with the fertility of the soil. But it by no means follows from this that the most fruitful soil is the most fitted for the growth of the capitalist mode of production. This mode is based on the dominion of man over Nature. Where Nature is too lavish, she “keeps him in hand, like a child in leading-strings.” She does not impose upon him any necessity to develop himself. It is not the Tropics with their luxuriant vegetation, but the temperate zone, that is the mother country of capital. It is not the mere fertility of the soil, but the differentiation of the soil, the variety of its natural products, the changes of the seasons, which form the physical basis for the social division of labour, and which by changes in the natural surroundings, spur man on to the multiplication of his wants, his capabilities, his means and modes of labour. (“Capital,” Vol. 1, page 522.)

However, as previously indicated, the influence of geography and climate, important as they are in the study of the make up of human society, recedes in importance as economic development advances.

Robert Reynolds
(To be continued.)