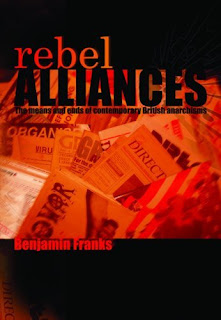 We review a new book by an anarchist on what anarchists in Britain think and do today.

There are anarchists and anarchists. Bomb-throwers and pacifists, syndicalists and communists, primitivists and egoists, even anarcho-capitalists. Knowing to our cost that the same can be said of "socialists", we must be careful not to use what one group who call themselves anarchists think as typical of what anyone who calls themself one does.

Benjamin Franks's book, Rebel Alliances: The means and ends of contemporary British anarchists (AK Press,), deals with anarchist groups today who he calls "class struggle anarchists". Which means we can ignore here the individualists and the anarcho-capitalists, but even so the groups left still have different approaches, especially as, for some reason, Franks includes "council communists" and "autonomist Marxists" among them.

He lists four criteria for being considered a "class struggle anarchist".

Franks places emphasis on the fourth and uses it to judge the principles, organisational forms and activities of "contemporary British anarchists", in particular Class War, the Anarchist (formerly Anarchist Communist) Federation and the Solidarity Federation (direct descendant of the old Syndicalist Workers Federation). The people around the best known anarchist publication, Freedom, are excluded as "liberal anarchists".

Prefiguring future society
We, too, hold that the means have to prefigure the end but reached this conclusion from a quite different starting point: that of democracy in the proper sense. Democracy means, literally, the rule or power of the people, i.e. popular participation in decision-making. It allows various ways of reaching a decision but, in the end, if consensus cannot be obtained, it has to come to a vote; in which case the majority view prevails. Democracy does not mean that all decisions have to made at general assemblies of all concerned or by referendum; it is compatible with certain decisions being delegated to committees and councils as long as the members of these bodies are responsible to those who (s)elected them.

Democratic control is not an optional extra of socialism. It is its very essence. This being so, socialism cannot be imposed against the will or without the consent and participation of the (vast) majority. It simply cannot be established for the majority by some vanguard or enlightened minority. That is our case against all forms of Leninism. The socialist revolution can only be democratic, in the sense of both being what the majority of people want and of being carried out by democratic methods of organisation and action. No minority revolution can lead to socialism, not even one that destroys the state (our case against certain anarchists) - and of course socialism will involve the disappearance of the state as a coercive institution serving the interests of a minority. Hence our conclusion that the movement to establish socialism, and the methods it employs, must "prefigure" the democratic nature of socialism.

Traditionally, anarchists have rejected democracy as an organising principle (not just the democratic state but any form of democratic organisation). The early British anarchists that William Morris met in the Socialist League in the 1880s denounced democracy as "the tyranny of the majority" (which Morris regarded as an absurd position). The anarchists who controlled the pre-WWI CGT union federation in France favoured the activities of an "active minority". Emma Goldman in Anarchism and Other Essays declared, in an essay entitled "Minorities versus Majorities", that "the living, vital truth of social and economic well-being will become a reality only through the zeal, courage, the non-compromising determination of intelligent minorities, and not through the mass". As the Socialist Standard commented on this in September 1924: "such views mean that the great body of the people will depend upon the kindness and wisdom of the Anarchist intellectuals to guide and mother us".

It is only in recent years that some anarchists have come to embrace democracy as an organising principle, mainly under the influence of industrial unionists and council communists (who claimed rather to be Marxists). Still, better late than never. But even now most anarchists have difficulty in justifying why someone should conform to a majority decision that he or she doesn't agree with; they still seem to think that no external decision can bind the "sovereign individual" of individualist anarchism (and bourgeois ideology). One group which did accept binding majority decisions - the now defunct Anarchist Workers Group in the late 80s - was denounced by the others, and again by Franks in this book, as crypto-Leninists.

This same ideology is reflected in the difficulty anarchist groups have with the concept of "representation". What they call "representative democracy" (whether in the state or generally) is rejected on the grounds that no group can be "represented" by anyone and that any "representative" inevitably stands in a hierarchical relationship with the group they claim to represent. But why can't a group (s)elect some of their number to represent them - unless you think that the supposed "sovereign individuals" who make up the group cannot sign away their right to speak and act for themselves?

Since even anarchists admit that not all decisions can be made by general assemblies or referendum, they get round this by saying that "delegation" is acceptable. But any attempted distinction between "representative" (bad) and "delegate" (good) is just playing with words.

This is not to say that what is called "representative democracy" in relation to the capitalist state is ideal. Far from it, even in the Swiss cantons and US States and cities where it is supplemented by the right of initiative (of a certain number of citizens to propose laws and call referendums) and the right to recall (unelect) a representative.
State elections
Capitalist democracy is not a participatory democracy, which a genuine democracy has to be. In practice the people generally elect to central legislative assemblies and local councils professional politicians who they merely vote for and then let them get on with the job. In other words, the electors abdicate their responsibility to keep any eye on their representatives, giving them a free hand to do what the operation of capitalism demands. But that's as much the fault of the electors as of their representatives, or rather it is a reflection of their low level of democratic consciousness. It can't be blamed on the principle of representation as such.

There is no reason in principle why, with a heightened democratic consciousness (such as would accompany the spread of socialist ideas), even representatives sent to state bodies could not be subject - while the state lasts - to democratic control by those who sent them there. The only arguments that anarchists have ever been able to put against this are that "power corrupts" and that this practice is not allowed by the constitution. But if power inevitability corrupts why does this not apply also in non-parliamentary elected bodies such as syndicalist union committees or workers councils?

Somewhat surprisingly, Franks does not condemn out of hand anarchist participation in state elections. Discussing Class War's standing of a candidate in a parliamentary by-election in 1988 he says that there could be occasions when this could be done as long it is done in a way that doesn't "reaffirm representative democracy", as he claims we do when we stand candidates. We would reply that when we stand candidates we do "prefigure" the genuinely democratic nature of future socialist society in that our candidates do not stand as leaders or offering to do anything for people but merely as potential delegates of those who want socialism, as mere "messenger boys (and girls)" pledged, if elected, to submit to the democratic control of those who voted them in. We suspect, however, that in not completely ruling out any participation in state elections Franks will be regarded by other anarchists as having conceded far too much.

The book - despite the drawback of having been originally written as a university thesis - does give a useful and comprehensive view of the discussions that have gone on in anarchist circles in recent years. It is interesting to note that some of these have been paralleled by discussions within our party, for instance, whether the revolution is to be a class or a non-class affair, and to what extent can community struggles outside the workplace be assimilated to struggles at the point of production. (For the record, our view is that the revolution has to be the work of the working class, but as the working class understood not as just manual industrial workers but as anyone forced to work for a wage or salary irrespective of the job they do, i.e. most people today; and that non-workplace struggles such as tenants associations and claimants' unions are as legitimate defensive struggles as the trade union struggle over wages and working conditions.)

On the other subjects which divide contemporary anarchists, we would side with the syndicalists in saying that economic exploitation is primary, but with the anarcho-communists in saying that future society will involve community-based administrative councils and not exclusively industry-based ones. We oppose the blanket rejection of the existing trade unions as proposed by the ACF (and the council communists). And we would agree with statements quoted by Franks (and have said the same thing many times ourselves) that "we exist not as something separate from the working class, not as some leadership for others to follow, but as part of the working class working for our own liberation" (Subversion) and "to the Left the working class are there to be ordered about because we are too thick to think for ourselves" (Class War).

In Franks's scheme, we would be classified as a group practising "propaganda by word" with occasional forays into "constitutional activity" in the form of participation in elections. What we don't do - and which all the anarchist groups engage in - is to participate, as a group, in "micropolitics", local single-issue campaigns. We don't necessarily dismiss all such campaigns as entirely useless but think it best to leave them up to the people directly concerned, merely advising them (if asked) to organise and conduct themselves democratically, without leaders and without outside interference from Leninist (and, indeed, anarchist) groups. As a group composed of people who have come together because we want socialism, we see our group's task as to concentrate on spreading socialist ideas.