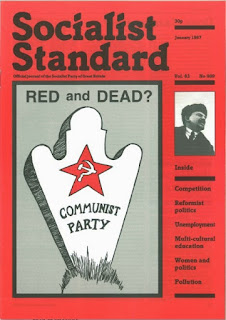 From the January 1987 issue of the Socialist Standard

Unemployment, as a percentage of the working population, has not been so high since the war. It has risen to 12 per cent in recent months — a total of 3¼ million — discounting many thousands not registered at unemployment benefit offices and therefore not included in the available statistics. Unemployment is therefore certain to be one of the chief issues in the next election, since it concerns not only those at present out of work but also those who feel insecure in their present jobs and those at school and in other forms of education.

With this in mind, speakers at recent conferences — Conservative. Labour and Liberal/ SDP Alliance — have attempted to reassure their followers and prospective supporters that they take the problem very seriously and are able to do something about it.

Conference “solutions"
At their October conference the Conservatives promised an extension of job-training schemes and financial assistance for those wishing to start their own business — but wisely made no predictions as to the number of extra jobs likely to result.

The Alliance on the other hand propose reviving British manufacture, the sector worst affected by unemployment, by linking wages to productivity — and accept that a pay freeze might be necessary. They claim that their policies "could cut unemployment from more than three million to below two million in the lifetime of a Parliament" (The Times, 17 September 1986).

The Labour Party promise to reduce unemployment "by about one million in its first two years" by substantial state investment in the "infrastructure" — roads, sewers and other services — if elected to office (The Times, 30 September 1986). In fact both policies — wage restraint and public investment — have been tried before without stemming a rise in unemployment. In an impassioned speech to Labour's Conference. Roy Hattersley claimed that “Above all things, Labour is the party of jobs". Well, is it? The graph shows the rise in unemployment over two extended periods of Labour government. On the other hand, the reduction in local government spending achieved by the Conservative government has been accompanied by an unprecedented rise in unemployment. 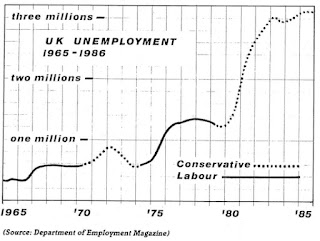 Nor is unemployment a solely "British disease". The following table shows the estimated percentage unemployment in the working population in other advanced capitalist countries compared with 11.9 per cent in the UK (Dept, of Employment Gazette, July 1986).

The cause of unemployment
Unemployment is a world wide problem and what stands out so clearly in all the conference speeches is that there is never any real attempt to explain what causes it in the first place. After all, the above group of countries have the material resources to provide a comfortable living for all their inhabitants and the vast majority of their populations are only too anxious to work. So what stands in the way of full employment? To understand this we need to know something of the operation of a capitalist economy and its inherent contradictions.

In a capitalist society the means of production and distribution of goods and services are owned and controlled by a minority of the population, the capitalist class. Of the remainder, the majority are dependent for their livelihood on being employed by the capitalist class for wages — generally about sufficient for them to work efficiently and rear their families. Within this society goods and services are produced, not primarily for the benefit of those employed, but to realise a profit when sold on the national or overseas market. Normally, if sale at a profit cannot be achieved, production ceases and those engaged in production become unemployed.

Profit results from the fact that the wages paid to the working class represent a value far less than that of the goods and services produced. The "surplus value" is appropriated by their employers, the capitalist class — or the state on their behalf. Part of this surplus value may be reinvested or pass into the hands of landlords in the form of rent and part into the hands of bankers as interest on borrowed money. They in turn seek profitable areas of capital investment. Finally, part of the surplus value resulting from the employment of wage and salary workers is used, usually by the state, to maintain an efficient working class by expenditure on educational and health services and for the defence of the system from internal or external threats. All this is accepted by the political parties who will contest the next election, with only one exception — The Socialist Party.

Constant unemployment
But let us consider the inevitable results arising from the operation of such a system of production. We must first note that the wages system severely limits the purchasing power of the working class so that capitalists engaged in the production of consumer goods soon find themselves in competition, not only with fellow capitalists in their own country but also with those abroad. Capitalists engaged in other forms of production such as machinery, shipping, aircraft, armaments, likewise meet competition at home and abroad. The inevitable result is an attempt by all concerned to reduce expenditure on wages so that profit margins can be maintained while undercutting competitors.

Since the early days of capitalism, therefore, machinery has been introduced to make labour more productive and reduce the wage bill. Division of labour, the conveyor belt, automation. rationalised administration and computerisation have all followed. None of the four political parties, recently meeting in conference, opposes these production techniques. They are admired for "increasing productivity".

Periodic unemployment
Any graph showing unemployment levels will, over an extended period, display "humps" rising above what we have called "constant unemployment". These "humps" reflect major or minor crises in capitalist trade — called trade depressions — resulting sometimes in calamitous increases in unemployment world-wide.

Such a trade depression was experienced between 1930 and 1939 when there were approaching three million unemployed in this country, six millions in Germany and eleven millions in the USA. Once again workers are experiencing mounting unemployment the end of which no one can see. Against this background some of the remedies proposed by conference politicians are patently trivial — nor do they offer any explanation for economic disaster on such a monumental scale.

During the depression of the 1930s The Socialist Party explained its causes and we can do no better than quote from a pamphlet we published at the time:

In their anxiety to obtain a surplus, the employers, when the markets are favourable, strain every nerve and fibre to increase their output. New machinery is laid down; fresh ‘hands' are taken on; overtime is worked. There is an expansion of trade such as occurred in the years up to 1929. Then, at the very height of the expansion, reaction sets in. Production in certain industries has outstripped demand; the markets are glutted and the warehouses full to bursting. Orders have fallen off and products have become unsaleable. Workers are discharged, and these, losing their purchasing power with the loss of their wages, affect other industries, and so the depression spreads (Socialism, August 1933).

Once again the product of human labour is inaccessible to those who have produced it and those who may need it. Governments are embarrassed by butter mountains, wine lakes and warehouses full of grain, which cannot be sold at a profit Workers in car factories try to repair their old cars at the weekend while the new ones they have produced fill the factory yard unsold. Such crises of over-production for the market are inevitable. Where capitalist countries compete with each other for the sale of their products, it follows that there can be no agreement about the amount each produces. Saturation and collapse of the market is unavoidable.

Localised unemployment
An individual nation may find its unemployment increased still further in either or both of the following circumstances:

Both the above influences have affected industry in Britain and in part explain the pressure on British workers to curb pay increases as the cost of living continues to rise — or even accept a wage freeze.

Capitalism holds no solution
With the above understanding of the causes and scale of present-day unemployment, it should be clear that most of the palliatives offered by politicians are trivial and ineffective. Once more we claim that the only cure for unemployment is to change the economic system from capitalism to socialism in which, as suggested by the title of this article, we are no longer employed to produce profits for a minority section of the community but in which the production and distribution of wealth can be unfettered.