Capitalism in the 21st Century

Why Capitalism Can’t Go Green (1.00pm till 2.15 pm)
Speaker: Paul Bennett (Manchester Branch)
Capitalism is simply unable to run on green lines, as its motive force is expansion and domination, with no thought for the consequences for the people or the environment. In this talk Paul Bennett, Manchester Branch,will argue that capitalism is unable to cope with the ecological challenges that lie ahead, from global warming,to depletion of resources.
Some writing on this subject
Pepper Standard Bennett Eco-socialism
The Tyranny of copyright (2.15pm - 3.45 pm)
Speaker: Tristan Miller (Central London Branch)
Tristan Miller, Central London Branch looks at copyright laws and recent attempts to have ideas free to all by developments in the internet. The internet was devised as free for all to access but capitalism fears this development in the 21st century and has tried to restrict free access.
Some more writing on this subject
Chomsky Miller
Another Century of War (3.45pm till 5.00 pm)
Speaker: Gwynn Thomas (South London Branch)
The new century opened with the promise of a "peace dividend".Tensions between the Super-powers had relaxed and the risk of interstate war seemed to have receeded only to be replaced by an increasing number of wars within states.Wars in which 90% of the casualties are civilians and 80% of those are women and children. Of the 50 major conflicts fought during the 1990's small arms were the weapons of choice in 46 of them.Gwynn Thomas, South London Branch, will argue that these are wars on the cheap.
Some writing on war
Orwell Thomas War

Each speaker will speak for 30 minutes. The rest of the session will be devoted to questions and discussion.

Free tea, coffee and light refreshments will be available throughout the afternoon. 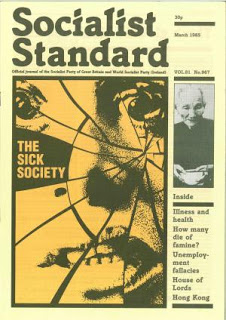 From the March 1985 issue of the Socialist Standard
Yet another circular from the Church of Scientology dropped through my letter box the other day. I must have received dozens since I bought a copy of the book Dianetics: the Modern Science of Mental Health a couple of years ago by mail order. In this thick stew of bowdlerised psychoanalysis, electronics, hypnosis, counselling techniques, eastern mysticism and home-spun American philosophy, L. Ron Hubbard claims to be able to save the world. Since 1950 when his articles about Dianetics first appeared in the pages of Astounding Science Fiction the wilful jargon has grown steadily more dense and perverse, and Dianetics, the self-styled science, has given birth to Scientology, the self-styled religious philosophy. It uses a version of the christian cross as one of its symbols, copyrights all its signs and key words, and charges the bargain price of £2,424 for its complete library of cassette tapes. And they will not stop writing to me.
The basic message behind Scientology goes something like this: there is nothing fundamentally amiss with the natural world or even the human social world. What is causing all the problems is the irrationality of individuals, who have been mentally damaged, in some cases from their conception onwards. The only hope for the world is to cure all these people with "religious technology". But just in case that proves to be too much of a long shot, you can learn to become a theta clear, in which case you will continue to exist even if the world is destroyed by hydrogen bombs.
Scientology has obviously tapped a deep well of need because it now has "churches" and contacts all over those parts of the world which are subject to American influence. Its particular bland of pseudo-science with older religious ideas has appealed to otherwise sceptical minds. Its shift of emphasis from sin to mental illness is one that christianity has not quite succeeded in making, but the psychiatric industry has proved it to be a huge money-spinner for decades.
Scientology is not alone, of course. Transendental Meditation, Life Wave, and many other variants of Yoga and Buddhism which emphasise mental health and power have attracted thousands of followers in America, Australasia and Europe. Many of them have parted with considerable sums of money.
The world in which these religions and cults and movements have grown up is the post-war one of the nuclear threat. It is a world in which mental hospitals have grown steadily in capacity; in which the prescription of sleeping pills, tranquillisers and anti-depressants has developed into a multi-million-pound industry; and in which the consumption of alcohol, marijuana and the hard drugs has relentlessly expanded.
But the trend is a complex one. It may well be true that men and women of today's working class (and capitalist class too) are more afraid, worried, stressed, frustrated than our parents or grandparents were. But it may also be true that such forms of misery are more likely to be recognised when the more physical deprivations of hunger, disease and squalor have been somewhat alleviated. Psychiatry is treating many of the sufferers, but then the expectations of happiness and fulfilment has itself been partly fostered by psychiatry. As priests and drug pedlars long ago discovered, the really lucrative trade is one in which the commodity creates a dependency and never fully satisfies the craving. 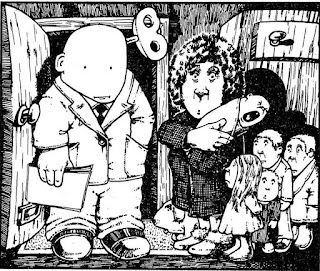