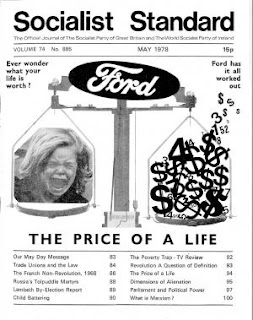 
In recent years the term alienation has come into common use with varying shades of meaning. The term is rich in content and provides insight into human experience at several different levels. Under capitalism the effects of alienation dominate every day life.

Literary people often think of alienation as an experience suffered by the individual who is isolated from the community because he cannot share its attitudes and values. Certainly loneliness, and the inability of society to create a genuine community, has much to do with alienation, and writers and poets often describe this.

It is also said that alienation results from the division of labour, where the productive process is broken up in such a way that work is meaningless. As an activity in itself, repetitive work on the production line provides no satisfactions. Under economic pressure an individual might spend his life doing work which he dislikes. It is undoubtedly a common experience that workers are trapped in lives which they feel are not authentic expressions of themselves.

Self-separation
In 19th century Vienna, 'Alienists' were concerned with insanity. To be alienated was to be deserted by one's true self. One had become separated from one's real self and taken over by something alien. The idea that we cannot be ourselves is a difficult one which does not seem practically possible. Yet this notion of self-separation, the splitting of identity, or the idea of difference between what men truly are and what they appear to be, is the central theme of alienation. Feuerbach conceived the idea of religious alienation. He argued that when man created the idea of God, he was dreaming of all the better parts of his nature, for which he yearned in his everyday life. Man invented in the idea of God those qualities of universal love, wisdom, power, forgiveness, brotherhood and unity which were denied him in everyday reality. Thus man separated himself from his better qualities and embodied them in an abstract concept, a figment of his imagination. According to Feuerbach, the idea of God was created out of misery, and in the image of man's best hopes for himself.

The ideas of Feuerbach were highly original but Marx took the further view that religious alienation should be explained in the light of other more fundamental economic and social factors. For Marx, the experience of alienation was the product of particular productive relationships. The concept of alienation is most revealing and significant when it is understood in association with Marxian economic theory.

The alienation of man is a direct consequence of capitalist productive relationships. The inability of man to create life as the expression of his best human qualities is given by the structure and objectives of capitalism. Under capitalism, man functions as an economic object in relation to a world of economic objects. His everyday existence as an economic category is a repudiation of his essential humanity. The working class, the entire community of producers, is separated from the means of production, separated from the products of its labour, separated from each other and themselves.

This takes place in the work activity. Under capitalism, work, or social labour time, is carried on as part of an exchange of values, labour power for wages. Capital buys labour power at its value and puts it to use. In use, the object of wage labour is the generation of values over and above its own value. This is the economic function of the working class, the production of surplus value which then belongs to Capital.

As a value generating object, exchanging labour power for wages, the worker has no other connection with the product; he is immediately separated from it. The production of the commodity objectifies social labour in the form of values which are then brought into relationship with the whole world of exchange values. This is the separation of the producers from the basis of their social existence, their social labour.

In his social existence the worker is part of an economic system where he functions as a value generating object. This is the dehumanising effect of capitalism. As a seller of labour power, the worker is just another repository of exchange value, conforming to economic laws which determine the existence of values.

Economic categories
This is men functioning and relating not essentially as human beings but primarily as economic categories governed by economic laws, external to their own power of rational control. The worker presents himself on the labour market where he is brought into competition with other workers. He is exploited. As with commodities in general, where supply is surplus to the market requirement, his labour power is unsaleable, and the worker is unemployed. Workers are taken out of production when there is no prospect of exploiting them, when there is no prospect of them being used as value generating objects.

Under capitalism, the experience that men have of each other is generally as economic objects and mere functions. It is this experience which reduces not only the human content of relationships but also man's view of himself. Workers are the source of wealth in an acquisitive society. Human beings are the means to material ends. Human nature is seen as exploitative, self-centred and greedy. Individuality is seen as consisting of the ownership of things. Man becomes an object, relating as an object, thinking the ideology of objects.

Insensitivity
It is against this background of insensitivity and human indifference that man's indifference to man still takes place. It is accepted that elderly people will die of cold because they cannot afford warmth. Millions of people will starve because they are not a market for food. At the same time food is stockpiled. The needs and interests of human beings are sacrificed to the economic laws of capitalism, profit is more important than people. Vast social resources are wasted on armaments and the technology of human destruction. Millions are killed in war. Nothing dramatises the alienation of man in our society more than the possibility that he might completely destroy himself. Under capitalism man is preoccupied with economic objectives alien to his needs and workers are not seen as human beings but as the material instruments of these objectives. The objectives of capitalism are class exploitation, the accumulation of capital and the maintenance of class privilege.

Alienation in its most vicious aspect lies in the fact that the accumulated product of social labour, the means of production, takes the form of Capital, which is not only separated from the producer, but then confronts him as a hostile and alien force. Labour creates Capital, and Capital exploits Labour. The separation of man from himself is seen in the way the working class creates, through its own productive labour, the economic forces of its own exploitation. Capital is the created product of the working class, yet it is Capital which lays down the economic conditions in which the working class may continue to have access to the means of life. Those conditions are that in the exchange of labour power for wages, labour will generate new values which will further accrue to Capital. And so while capitalism lasts, the process goes on. Labour creates a world which is not its own, a world beyond rational control, in which the worker feels more and more estranged.

When we think of all the reasons why men produce wealth, these go beyond mere material survival. In the productive process, men express themselves socially. Undoubtedly, the satisfaction of needs has always been a source of man's anxiety. Co-operation and a division of labour have always made for greater efficiency, yet there have been disadvantages in the fragmentation of the productive process. The division of labour can be elaborated to the point of meaninglessness. Repetitive work on a small part of a complex industrial process can be a sterile activity. But the experience of alienation has been attributed too much to the division of labour. The satisfactions that men gain from co-operating socially are due not so much to the kind of activity that takes place but more to the kind of relationships that exist between the participants. What might be thought of as unpleasant work, when carried out voluntarily by individuals, cooperating on equal terms to complete some necessary task which is in their common interest, can in fact produce a group experience which is satisfying at various levels of need. It makes for productive efficiency and provides a social situation in which individuality is meaningful and therefore enhanced. This is the opposite of alienation. The association of alienation with the division of labour is not a direct one but is more to do with the historical process where a primitive division of labour was associated with the origin of class divisions. It is the class division of society that forms the background of alienation, not the division of labour.

The experience of alienation is where the individual feels that in life he does not fulfil himself but fulfils social and economic forces external to him and beyond his control. Alienation is where the individual feels estranged in his own existence. This is a direct consequence of capitalism where workers are functioning as a source of new values, and living out the economic laws of value. In the productive process, workers reproduce the conditions of their own exploitation and their continued existence as value generating objects.

Socialism will eliminate alienation because its relationships and organisation will be centred on human needs and not on economic forces external to human needs. Socialism will be a society of man for himself. The whole community will relate on equal terms about the means of production and the earth's resources and co-operate to produce goods, services and amenities solely for use. This will be an association of men and women in conscious control of their own lives, living for themselves with the freedom to decide upon social projects and to organise resources to complete those projects. Socialism places man at the centre of social organisation. Equality, co-operation and democratic participation will bring productive efficiency in response to human needs. But more than that, it will do so in circumstances in which the self-directed individual will live positively, integrating his own life with the development of the whole community.