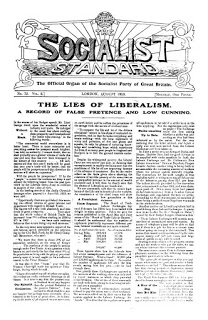 The risks of capitalists have been finely illustrated at the expense of the cinematograph people who shelled out some £30,000 to the principals in and promotor of the recent glove contest in America. One Jeffries essayed to "take up the white man's burden," which in this instance was to prove the superiority of the white over any other human complexion. It was thought a pretty safe calculation that the universal interest in the spectacle of "Mistah Jeff " taking up the white man's burden, would warrant the outlay, but alas ! for the "schemes of mice and men," it was forgotten that the same pictures might show the black man helping him to lay it down again. Of course the overlooking of this contingency made all the difference.

Was it to be supposed that civilisation could stand it ? We all know that civilisation is based firstly upon the superiority of the white to the coloured races, and secondly upon the superiority of the capitalist to the ordinary or worker white. But what sort of an effect would these moving pictures have upon the social aspect in Africa, and what tale would they whisper into the ear of young India, and how would they be received on the banks of the Nile, where the burden of the white man's civilisation sits none too lightly on brown backs ? The best black man has beaten the best white. The best black is better than the best white. The black is better than the white.

As Japan snatched the halo of sanctity from the Western brow when she drove the Russian legions before her, so these pictures of the best white man trying and failing to chew all he had bitten off might be taken by the dusky ones the world over as evidence that the miraculous no more belongs to the white skin than to the Western position, and that even the most godlike of white men has a crick in his neck if the axe is put on in the right place—and then goodbye to British misrule in India and Egypt, and farewell to white supremacy in East and West. And then when the worker white made the startling discovery that there was nothing inferior to him he might begin to seriously ask if  there is anything superior, and such an inward searching really would place the foundations of our capitalist civilisation in jeopardy.

And now will anybody put up a purse for the Parliamentary champions of the I.L.P. and the S.D.P. ? It need not be a large one for these gentlemen's price is not high. Some time ago Mr. Will Thorne, M.P., raised "hell and Tommy" to get a battleship built on the Thames, and with the assistance of that other good Liberal, Sir John Bethell, M.P., succeeded in steering an order into the offices of a Thames shipbuilding firm. Mr. Keir Hardie, M.P., on the other hand (according to the Manchester Guardian, July 5) said that five and a half million pounds were to be added to the naval expenditure this year and asked : "Where is this going to end ?" He went on : "When will the working class of Great Britain realise that so long as you go on squandering millions upon the navy and the army there is no money left for social reforms ? "

Now here ia a pretty kettle of fish ! Both Bill Thorne, M.(um)P.(er) and Keir Hardie, M.(um) P.(er) are reformers of the first water, and while the latter cusses over the naval expenditure, the former yells for more. Pitch them a twenty-four foot ring — a twelve-foot — nay, a six-foot will better suit their agility, not to say slipperiness — and let them set to.

At the same meeting where Mr. Hardie gave voice to the words quoted above he also had something to say upon the Conference on the House of Lords question. "It is a matter of no concern of mine," he said, "whether the Conference meets with closed or open doors, but may I say in fairness to the Conference that if there was to be a conference at all it was in the vary nature of things bound to be a secret conclave. Whenever the Miners' Federation meet the masters to discuss matters in dispute you do not admit the Press, and rightly too."