Film and the Anarchist Imagination

Book Review from issue 54 of Organise, theoretical journal of the Anarchist Federation

Film and the anarchist imagination by Richard Porton (Verso 1999)

It's quite rare to come across an academic work with anarchism as its subject matter. It is rarer still to find an academic work that exhibits any in-depth understanding of the authentic history and developing theory of anarchism. Most academics don't get past calling the IWW the International Workers of the World. Those who do are usually happy to repeat the lies of the ruling class and to maintain the 'anarchist' caricatures that serve to maintain a false image of what we actually are.

This book, however, written by a teacher of cinema studies at the College of Staten Island in New York, exhibits an unusually deep understanding and wide knowledge of the historic movement and the political arguments within anarchism. The author in fact sets out to consciously deconstruct the stereotypes of anarchism and anarchists that have appeared in both mainstream and 'alternative' cinema.

Extremely readable, the text rarely uses pretentious-git-speak to intentionally, or otherwise, obscure the core meanings of the arguments. The introduction gives a good historical background to the development to anarchist ideas during "¼ more than a hundred years of labour agitation and revolutionary struggles" (p2), and offers the reader who has not come across anarchism before an informative background to the subject matter of the book. It is obvious from the beginning that the author actually knows what he's talking about!

There are five sections: Anarchism and Cinema: Representation and Self-Representation; Cinema, Anarchism, and Revolution: Heroes, Martyrs, and Utopian Moments; Anarcho-syndicalism versus the 'Revolt against Work'; Film and Anarchist Pedagogy and The Elusive Anarchist Aesthetic. Each section can be read independently which makes it a great book to dip in and out of.

This reviewer must admit to not having heard of, never mind having seen, many of the films mentioned and it is fascinating to learn that Malatesta, for example, has been the subject of a highly sympathetic movie (Peter Lilienthal's Malatesta, 1971) or that Alexander Berkman unsuccessfully hawked a 'swashbuckling' screenplay based upon Nestor Makhno's life around Hollywood! It's also interesting to see how some film makers who consider themselves 'sympathetic' to anarchism have played a role in reinforcing the stereotype of the anarchist as irrational and impulsive, if not slightly mad (Wertmuller's Love and Anarchy, 1973 for example).

But far from merely being an encyclopaedia of anarchists in the cinema, the book discusses the contradictions within anarchist film-making and anarchists/anarchism as subject matter. Few perspectives aren't tackled intelligently and the research is exhaustive. Critics might suggest that this is a simply an academic exercise and that the cinema is Spectacular representation at its worst. However, to have such a clued-up and sympathetic text in circulation which may bring revolutionary ideas into areas where they don't usually see the light of day, can only be useful.

Try and get it into your local public or college library.
Posted by Imposs1904 at 9:47 PM No comments: 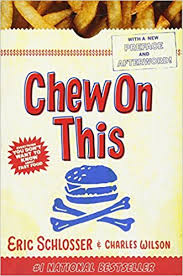 Book Review from the January 2008 issue of the Socialist Standard

Chew on This. By Eric Schlosser and Charles Wilson

Schlosser is the author of Fast Food Nation (reviewed in the Socialist Standard for November 2002), and this book covers some of the same ground as the earlier one. That's to say, it looks at the power of fast food companies, especially McDonald's, and the nature of the food they serve.

McDonald's is the largest purchaser of beef in the United States, and this position has enabled them and the other big meat-packing companies to drive down the price paid to ranchers, many of whom have gone out of business. The raising and slaughtering of pigs, cattle and chicken has been aimed squarely at making profits, with little regard for the conditions of the animals or the workers. Chicken, for instance, will live barely six weeks and never see a blade of grass. They die increasingly of heart attacks, caused by a thick layer of fat around the heart.

Of course the fast food companies don't want their customers to think about where the food comes from and how it's made. They'd rather you didn't reflect on the manufactured flavours that are added, or the fact that food for children is made as sweet as possible. Massive amounts of advertising are aimed at kids, who are naturally very susceptible and can influence where their parents take them to eat. Further, the advertising isn't confined to food, as giving away or selling toys is another means to get the kids in.

The employees are often not much older than children, given the fast food industry's reliance on teenage labour. Teenagers are simply cheaper and easier to control. They mostly earn the minimum wage, which in the US is worth less in real terms than it was fifty years ago. There is a large turnover of staff, and the derogatory label 'McJob' sums things up well.

It may even be a McWorld that is developing, as the fast food chains expand outside the US and Europe. The first Burger King opened in Baghdad just nine weeks after the US-led invasion in 2003. The UK has long been part of the McDonald's empire, with 2.5 million people eating there every day.
Capitalist-style fast food treats appallingly the animals that it raises and kills. It's also bad for the workers it employs and bad for the consumers who eat it.