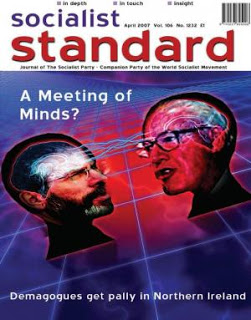 Increases in atmospheric carbon don't cause global warming, global warming causes increases in atmospheric carbon. So what is heating up the Earth? The sun. So why are the vast majority of climate scientists claiming it's carbon, not the sun? Because they're on a $4bn gravy train of funding and they aim to ride that sucker until the end of the line, even though their phoney Carbon Crusade is killing the poor little children in the Third World who are not allowed to have electricity like the rest of us.

This, in case you missed it, was the argument behind 'The Great Global Warming Swindle' broadcast on UK's Channel 4 on March 8. An impressive array of paleoclimatologists, oceanographers and other assorted professors was wheeled on to assure us that everything we thought we knew about global warming was upside down and back to front, and that the present warming phenomenon was entirely natural, and no different from previous warm spells in Earth's history. What was really going on was a gigantic conspiracy to pervert science, distort the facts and condemn developing countries to perpetual misery by creating an entirely bogus panic about atmospheric carbon. They gave us the figures, they showed us the charts, they answered the questions, and it was all utterly convincing.

And nonsense, unfortunately, as a stroll through various online blogs and articles soon revealed. The experts on the programme, with one exception, turn out not to be quite the scions of honesty they appear to be, but rather well-known Denial Monkeys who have agendas of their own and whose theories have already been falsified repeatedly. The exception, oceanographer Carl Wunsch, after seeing the show, sent an apoplectic letter to C4 saying he'd been conned into appearing, thinking he was taking part in a balanced and critical analysis. This is almost certainly true, and he wouldn't be the only one. The producer, Martin Durkin, has a history of making contentious programmes accusing environmentalists of being 'proto-nazis', and from which his researchers have walked out in disgust and his interviewees have wailed afterwards that they've been had. In Durkin's experience, when the BBC reject his programme synopses as junk science, he can always rely on Channel 4 to produce them instead.

Just why Channel 4 thinks bad science makes good TV is a total mystery. Pathfinders does not often stoop to sending whingeing letters, but the memory of C4's disgraceful championing of the charlatan Graham Hancock is still raw and rancid, so a quick blister to the C4 complaints department seemed appropriate for once, to whit: "I appreciate that C4's brief is in part to be 'controversial' but to extend this brief to making programmes that are based on deliberate and easily verifiable lies is not only immoral and indecent, I'm surprised it's not illegal as well. I just don't see how you can justify the dissemination of nonsense in any programme but especially one in which the issues at stake - the future of the planet - could hardly be more important. Judging from the resulting blog discussions there are any number of gullible people who are now completely convinced by your programme that global warming is not a problem, and who will never see any rebuttal unless another channel takes responsibility. There are people out there who claim (with lots of evidence, naturally) that Jews cause AIDS, that blacks are racially inferior, that rape and violence are genetically-based, and that the CIA is putting nanoscale monitoring devices in our drinking water. No doubt these people would do anything for the oxygen of a Channel 4 publicity hype, so I'm bound to wonder just how far your lust for controversy takes you and where you draw the line." A pre-transmission statement from Channel 4 gives you some idea of their probable response to this:
"It is essentially a polemic and we are expecting it to cause trouble, but this is the controversial programming that Channel 4 is renowned for." (LSE UKNews, March 4)

They will doubtless not be worried, even though in the past they have had to broadcast an unreserved apology for one of Durkin's other documentaries.

And what of the programme-makers themselves? Several of the interviewees are known to have right-wing free-market sympathies with links to the anti-environmentalist Foresight Institute, and their attack on human-derived global warming is seen by many to be a response to their fear that political action to prevent climate change will entail greater government intervention in the capitalist marketplace. So, a free-marketeer plot to loosen the grip of state governments and let the corporations take control? But wait, the plot thickens. The producer, Durkin, and some of his colleagues, are associated with the Revolutionary Communist Party, aka Living Marxism, aka the Institute of Ideas, aka Spiked Online, aka Sense About Science. So, a left-wing plot by a sect of multiple identity, media-cuddly Bolsheviks? Are the right and left-wings of capitalism now climbing into bed together to breed Son of Denial Monkey? What for? According to SwindleWatch.org, the RCP's master plan could be to foment total environmental complacency in an effort to bring capitalism to early disaster, thus inciting a revolt by the proletariat, if any of us are still left alive to revolt, that is. Either that, or they are just plain bonkers. Nobody knows.

In the wake of the Stern report, Al Gore's Inconvenient Truth, and the recent International Panel on Climate Change (IPCC) report, it's easy to see that the small minority who deny human responsibility for global warming are feeling somewhat ganged-up on. It's just not like the good old days, when natural scientific caution by researchers allowed gainsayers all sorts of loopholes to exploit. Even with the reservations among scientists about the IPCC pulling its punches (New Scientist, last week), their report is damning enough to be conclusive as far as most policy-makers are concerned. Whether this programme has damaged the climate debate or merely Channel 4's already shaky reputation on factual reporting remains to be seen. What is worrying is that there is an extraordinary enthusiasm on the part of many people to believe that the world of science is as corrupt and dishonest as the world of politics, and that the 'brave' heroes who stand up against it are to be admired and believed implicitly. It's not just those who inhabit the twilight world of paranoia who believe this. Even realists can succumb to cynicism. This is a world, after all, where money doesn't just talk, it smooth-talks, and nobody can really trust anything anybody says when there's a dollar behind every answer. Are people wrong to distrust the scientific community, and therefore believe every nutjob with a theory that same community has loudly disowned? Generally yes, but when it is well known that science chases the money and that money doesn't chase the science it doesn't like, it is not hard to see how these conspiracy theories get started.

Interestingly, the only real attack on the global warming lobby which has had any real merit is the report (BBC Online, Feb 27), that the Oscar-winning Al Gore has a 20-room house and swimming pool which uses twenty times the national energy average. Gore's spokesperson shamefacedly admitted this, and responded rather lamely that the family were looking at low-wattage light-bulbs and solar panels to reduce their consumption. Hooray for the press. Nobody likes a smart-alec.