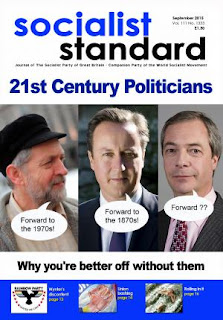 From the November 1953 issue of the Socialist Standard

Some old-timers in the Trade Unions together with a few in the rebel fringe of the Labour Party, even a few of the older members of the S.P.G.B. have been heard to claim that certain novels read in their younger days were the means of guiding their steps in the direction of Socialism.

Foremost amongst the books which are accorded this honour is Robert Tressall's 'The Ragged Trousered Philanthropists." We have been asked a number of times to draw this book to the attention of younger readers of the SOCIALIST STANDARD, although, if a person is already a reader of the SOCIALIST STANDARD he will not glean much education from Tressall's book. But he will get a world of fun and a clear insight into conditions in the building and house decorating trades during the first decade of this century.

The book was first printed in 1914 and has been continuously reprinted ever since. It is a story written round the life and work of an imaginary Frank Owen, a house painter and a Socialist (if we excuse a little confusion in his theory) and the small band of his workmates. Owen takes every opportunity in arguments with his mates to expound his Socialist ideas, doing so very simply and effectively for the reader, but hopelessly for his mates.

Certain chapters in the book are more than humorous, they are uproariously funny and there is deep tragedy, too. It is argued by some that this is the story of Robert Tressall's own life. Certainly Tressall was a house painter and, from what little we know of his life there are grounds for the claim. If you are one of the very few who have not read this book, do so. It is still in print and in plentiful supply. If you are one of the old ones who read it years ago, read it again. We have just re-read it before writing about it and we had great fun.

Another book that gets commended for similar reasons is Jack London's "Iron Heel." This is an altogether different book from Tressall's. It has been published in many editions since it first appeared nearly fifty years ago and the latest is still to be seen on bookstalls.

Jack London tells his story through the mouth of the wife of a man called Ernest Everhard who was a "Socialist" who would fit very nicely into the present day Communist Party. It is a story of the development of Capitalism in America projected into the years ahead of the time of telling. It tells of the ever increasing exploitation and subjugation of the workers by a capitalist oligarchy called "The Iron Heel," of the hardening and sharpening of the class struggle and of two bloody insurrections that result in the defeat and massacre of the workers.

Despite the quite good lectures and arguments of Ernest Everhard and some of his associates, this book would never, on its own, convert anyone to Socialism. Its main appeal is emotional and by that means it might urge a man to study class society seriously. But a worker whose approach to social problems is purely emotional is ready prey for political parties which rely on the emotional upsurge of their supporters and not on a clear understanding of working class interests.

A third book in this category is Upton Sinclair's "The Jungle," also still in print after forty-seven years. This book was mentioned in these columns in May, 1953. It os a story of the American stock yards and, although it is a remarkably fine story, the same criticism applies as to Jack London's book.

Whether these books are useful to put in the hands of a non-socialist worker with the hope of leading him, by their guidance, along the path to an understanding of Socialism, once he is on that path he will enjoy reading them and we have little doubt but that most convinced Socialists have read them. If they haven't, then we can recommend them to an honourable place on the book shelf.