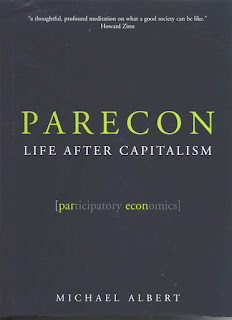 Book Review from the February 2006 issue of the Socialist Standard


Participatory economics, or parecon for short, is a vision of life after capitalism favoured by many in the anti-capitalist movement. The author of this particular vision helped to establish Z Magazine and its web site Zmag, including its subsidiary page devoted to parecon, which debates the issues raised by this book.


So-called "market socialism" is rejected because the market and class differentials would remain, as would buyers and sellers of labour power (capacity to work). In Albert's account, because class differentiation disappears in parecon, "you cannot choose to hire wage slaves nor to sell yourself as a wage slave." Parecon permits workers to assess their own pay and conditions in their decision-making by inputting their preferences via councils. It apportions income in accord with effort and "does not force or even permit people to try to maximise profits, surplus, or even revenues."


Notice however that Albert is specifically talking about prohibiting profit maximisation, not profits as such. Profits are acceptable; "excessive" profits are not. In the procedure envisaged, individuals and councils submit proposals for their own activities, receive new information including new indicative prices, and submit revised proposals until they reach a point of agreement. This process is open-ended and in Albert's book a hypothetical example is discussed which reaches a seventh planning cycle, or as Albert calls it "planning iteration." In reviews of this book much has been made of the potential for bureaucracy in this procedure, but a more telling criticism would be its unquestioning acceptance of the profit system. Wages cannot rise to the point which prevent profits being made; and a fall in profits will put a downward pressure on wages. This is called the class struggle.


"Parecon is basically an anarchistic economic vision", admits Albert, and it shows. Like many on the left, the difference between capitalism and post-capitalism presented here is essentially political, not economic. As indicated by the title, the crucial factor is participatory planning. The capitalist economy would remain substantially the same in parecon: the accumulation of capital out of profits produced by the unpaid labour of the working class.