Editorial from the November 2012 issue of the Socialist Standard

Future heads of state on both sides of the Atlantic have been hitting the headlines this month. In the US, the presidential election is forging ahead, full of fanfare, hoopla, moral combat, insincere promises and, of course, ‘economic analysis’. The whole shebang is well on its way to an underwhelming denouement in the inauguration of the 45th caretaker of US capitalism.


Less feverishly, Charles Windsor, future head of both British and (bizarrely) Canadian states, has been caught in the media’s headlights (again). Charles, of course, needs no Big Top and election razzmatazz to invest him with power and privilege, only the family circus and his mum’s approval, signalled by the popping of her royal clogs. Recent journalistic digging, though, has unearthed just how much power and privilege the dusty corridors of Clarence House still retain. The noble prince, it seems, has been caught with his hands in the cookie jar rifling the ‘estates’ of Cornish commoners who die without heirs - as is his perfect right, apparently. Silver spoons are not enough to satisfy the controversial princeling. Nor even cookies, it seems. Now we have Spidergate, the prince’s dark attempts to influence power by writing to the PM – forbidden fruit for the monarchy. And we learn, too, of his ability to veto legislation through the royal prerogative, an institution as potent and mysterious as the orb and sceptre themselves.
Meanwhile, down in the sink estates, ghettoes and no-go areas of the urban poor, where lurk dangerous ne’er-do-wells and benefit fraudsters waiting to mug the economy and deprive well-fed, citizens of their hard-earned privileges (how could we doubt you, Mr Pickles?) – in these mean streets, few cookie jars can be seen gleaming in the lamplight. In the depths of depression and austerity, belts are tightening, homelessness is rising and pay-day loan sharks are on the prowl for desperate families trying to keep the kids warm and fed.
And why? The owners of capital are on an investment strike: too few cookies are available to tempt them back into making profits, and even fewer crumbs than usual are falling from their tables for the rest of us. What to do? In a moment of distraction, Captain Cameron and George, his loyal bursar, have been seen rearranging deckchairs on the Titanic. Not that British Capitalism is going under – far from it. The ship may be holed and sitting low in the water, but she’s a sturdy vessel. And her buoyancy chambers are soundly maintained by workers loyal to the owners’ interests. Like the Titanic disaster, though, this latest plunge into recession is claiming victims in steerage as several thousand pensioners are calculated to die of hypothermia this winter in the UK as surely as the Titanic’s passengers perished in the icy waters of the Atlantic.
So, in place of a socially responsible and fulfilling life, it’s more bread and circuses for the rest of us: we can drown out our worries with the noisy clatter of Mitt and Barack in the gladiatorial arena or the sight of Charles sneaking down to the kitchen at midnight, looking for the Jaffa cakes. Bring on the clowns.
Posted by Imposs1904 at 10:01 AM No comments:

A Nobel Prize for Non-Economics

The Cooking the Books column from the December 2012 Socialist Standard

The Nobel Prize for economics is not a real Nobel Prize in that it was not set up by Albert Nobel himself but only by the Bank of Sweden in 1968. It usually goes to some economist who has done research on some obscure aspect of the market economy or on some government economic policy in vogue at the time. If you read the Swedish Academy of Sciences’ reason for awarding this year’s prize to Lloyd Shapley and Alvin Roth you could be excused for thinking that this year was no different. According to the citation it was for having ‘generated a flourishing field of research and improved the performance of many markets’ and ‘for the practical design of market institutions’.

Actually, this just shows up how ignorant or, worse, how deliberately misleading (to create the impression that markets are eternal) is the Academy’s understanding of economics. A position shared by the (London) Times (16 October) when it said that the winners’ ‘studies helped to improve efficiency in markets where price was not an issue.’ But a market where price is not involved is not a market. It’s an oxymoron.

What Shapley and Roth had in fact worked on was how to allocate resources to needs in a non-market context. As the (London) Times went on to say, they worked out in theory (Shapley) and practice (Roth) how to match ‘doctors to hospitals, students to dorm rooms and organs to transplant patients,’ adding ‘such matching arrangements are essential in most Western countries where organ-selling is illegal, and the free market cannot do the normal work of resource allocation’ (like allocating organs to those who can pay the most).

Shapley is a mathematician not an economist and so not concerned with markets, while:

‘Professor Roth is regarded as an authority on a field known colloquially as “repugnance economics” – in essence, the study of transactions where the application of the price mechanism is regarded as morally repugnant, such as the sale of body parts, sperm and eggs, prostitution and even dwarf-throwing.’

So, we really are talking about a non-market way of allocating resources. As socialism will be a non-market society where the price mechanism won’t apply to anything, the winners’ research will be able to be used for certain purposes even after the end of capitalism; which is not something that can be said of the work of most winners of the Nobel Prize for Economics.

No doubt it would continue to be used to allocate organs to transplant patients and students to rooms. In fact, this last could be extended to allocating housing to people living in a particular area. While they may not get their first choice, people would get something for which they had expressed some preference and that corresponded to their needs and circumstances. It might even help answer Bernard Shaw’s question, ‘Who will live on Richmond Hill in socialism?’ Since socialism will be a non-market society the answer can’t be, as it is under capitalism today, ‘those who want to and who can afford to.’ This would not only be ‘repugnant’ but impossible. 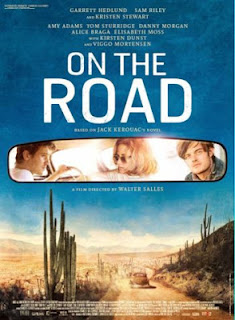 Film Review from the December 2012 issue of the Socialist Standard

Jack Kerouac's seminal 'beat' novel On the Road was first published in 1957. It has finally made it to the silver screen in a faithful adaptation by Walter Salles (director of The Motorcycle Diaries about the young Che Guevara). Salles captures the excitement of youth in search of ‘kicks’ in the shape of sex, drugs, jazz and travel in the early years of the ‘beat’ generation. The story is autobiographical and concerns the adventures of would-be writers and poets Jack Kerouac, Allen Ginsberg and William S. Burroughs, their involvement with Neal Cassady in the years 1947-50 in New York City, Denver, New Orleans, Mexico and their transcontinental journeys.

Kerouac is sensitively portrayed by Mancunian actor Sam Riley who was excellent as Ian Curtis in the Joy Division film, Control, while Cassady is played to the hilt by Garrett Hedlund who was Patroculus in Troy.

Cassady represents for Kerouac the lust for life which he described as ‘the only people for me are the mad ones, the ones who are mad to live, mad to talk, mad to be saved, desirous of everything at the same time, the ones who never yawn or say a commonplace thing but burn, burn, burn like fabulous yellow roman candles exploding like spiders across the stars’.

In the film Cassady is reading Proust's Swann's Way which is given him by Kerouac. Proust and Joyce were major influences on Kerouac as a writer, while Blake, Celine's Journey to the End of the Night, and Dostoyevsky's Notes from Underground were literary influences on all the ‘beat’ writers. Philosophically, they were influenced by Nietzsche and Spengler's Decline of the West, and advocated Rimbaud's ‘New Vision’ for their writings and his ‘derangement of the senses’ through drugs. Salles film includes scenes of marijuana smoking and ‘speeding’ on Benzedrine plus straight and gay sex scenes.

The outstanding performance is by Kristen Stewart as Mary-Lou, and her performance in this film is in stark contrast to her role in the right-wing teen vampire films of the Twilight series. Viggo Mortensen as Burroughs has only a brief cameo performance, but watch for Joan Burroughs sweeping the lizards out of the tree!

Jazz, particularly the be-bop revolution of the 1940's as personified by Charlie Parker, was an influence on the ‘beats’. In the film there is a ‘scat’ jazz vocal performance by Slim Gaillard portrayed by Coati Mundi.

The ‘beat’ generation was a reaction against the consumerism and materialism of post-war American capitalism, the puritanism of bourgeois morality, the conformity of middle-class life, the fear endemic in a post-Hiroshima world of the military-industrial complex, the racism and prejudice in society, and the general lack of spirituality. The ‘beats’ advocated a ‘second religiousness’ and pursued alternatives to Judeo-Christianity in eastern religions such as Buddhism.

In On the Road, Salles and Kerouac's sensitive portrayal of the Mexican fellaheen is fundamental to Kerouac's statement about land and indigenous peoples: ‘The Earth is an Indian Thing.’
Steve Clayton
Posted by Imposs1904 at 5:38 AM No comments: