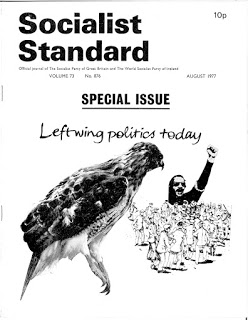 Public Eye
A great deal of emphasis is placed nowadays on the way a thing appears; while this is no bad thing in itself, the importance of a “good image” tends to increase as the wares offered become less and less satisfactory. Any salesman, or politician hawking his policies is aware of this. In turn this progression can lead to the “image” representing the opposite of the truth and the State is no newcomer to the trick. Recruiting posters for the armed forces give the impression that most of the applicant’s time will be spent living it up on distant beaches.

Sir Robert Mark, the recently retired Police Commissioner, says that the police force too has found it useful to give certain false impressions which assist it in the work of the State.


The real art of policing a free society or a democracy is to win by appearing to lose. By that I mean, for example, that it would be disastrous in dealing with situations like Grosvenor Square or Red Lion Square if we were to rely on water cannon or teargas or particularly violent methods. I think our technique is more sophisticated. We have a singularly attractive horse, she is the Brigitte Bardot of the 230 horses that we possess and she is trained to simulate death on the word of command in front of a television camera. This is the way to make sure that the police image which the British people like to have is maintained.
London Evening Standard, 15th July 77


Performers and Performance
Many reasons have been put forward to explain what is called "Britain’s poor economic performance.” The odd thing is that almost every one of them seems to have an opposite number: Wages are too high—wages are too low, likewise prices, investment and inflation. To further confuse the issue Mr. Francis Pym, Conservative front-bencher, has added what he sees as the dread cause.


Ceaseless party crossfire was the main cause of Britain’s poor economic performance in recent years.
The Times, 14th July 77

On form to date, it is possible that one of the Labour windbags will soon propose more “crossfire”(?) as a solution. However Mr. Pym seems to have short-circuited this possibility by remarking:


There was more in common now between the millions who voted Conservative, Labour and Liberal than the issues which divided them. Many did not seem to like the choice offered and feared that whichever they chose, they might get an unsatisfactory result.

Mr. Pym may not know much about capitalism’s economics, but when it comes to the choice which voters are faced with, he knows exactly what he is talking about.


Make us an offer
And Mr. Pym is not alone. Stung by Conservative taunts that the Liberals had made their agreement to vote with Labour on purely opportunist lines, Mr. Emlyn Hoosen (Liberal MP) surely disarmed critics in Parliament with his candour:


The present government had behaved very badly for their first two years in office and there was little to choose between the red devils opposite and the deep blue sea on the other side of the House. Their past behaviour had put the leader of the Liberal Party in a dilemma.
The Times, 12th July 77

The dilemma being that the Liberal Party, like a tick bird, has to fly from hippo to hippo to gain sustenance. The notable difference being that the tick bird does serve some useful function.


Hoots
This writer once had a canvasser call who, when asked about the candidate’s particular policy, replied immediately that she didn’t know much about it— the candidate was her son and she was only helping him out. The Scottish National Party canvassers clearly run into similar problems on the doorstep and this provoked someone into writing the SNP Canvasser’s Manual—their equivalent of “How to make friends and influence people.” It gives mock questions, together with sample answers; and techniques on how the SNP canvasser might “convert” the listener. One ploy is to throw yourself into it—think in terms of


The person coming to this door is going to be the most interesting person I’ve ever met . . .
Never attack something a man says he had admired, it was better to agree and then to add: Pity he’s in the wrong organization.
The Times, 6th July 77

The SNP however have been caught with their kilts down as Labour and Conservative MPS, none of whom is short on hypocrisy, make hay with this sort of pandering technique and SNP have pulped the unsold copies in embarrassment It seems a pity to add to their discomfort, but one piece of advice contained in the manual struck us as particularly unnecessary:


It might be valuable for the canvasser to explain his own reasons for joining the party. But do not talk about seeing the light or make it sound like a new religion.

If nothing else the SNP have added A new dimension to their much loved phrase—Scottish oil.