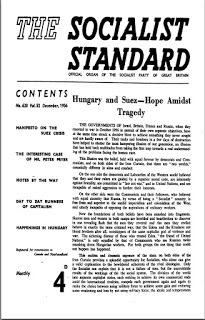 From the December 1956 issue of the Socialist Standard

It's a long way from Pontardulais to Pretoria: the latter, though way down in the Southern Hemisphere, is quite well known as the administrative centre of South Africa, while the former, though only within a few hours’ journey from any part of the British Isles, is relatively unknown to people outside South Wales, being a sombre little township on the western edge of the coalfield. Yet anyone living in South Wales who has followed events in South Africa during the last few years can appreciate certain trends taking place that are common to both.

It has always been the contention of Socialists that (1) Capitalism, wherever it operates, despite differences in climate, language and culture, produces the same set of conditions from which inevitably flow the same problems. This is not to say that conditions are everywhere identical under Capitalism; different areas are often undergoing different stages of Capitalist evolution, depending on historical background. However, when Industrialism comes, late or early, Capitalism comes with it: they are bound up in each other.

(2) Capitalism, desiring always a submissive working class, seeks everywhere to condition the people: through the Church, universities, schools, newspapers, radio and other media of disseminating thought and ideas.

(3) Despite the constant effort in this direction, there exists, invariably in Capitalist society, groupings that contradict and are in opposition to Capitalist society (where it hurts them) and towards one another.

If the above is a true description of Capitalist society everywhere, it is not surprising that similarities should exist in the framework of everyday life as it affects the workers in two places as different in other respects as South Wales and South Africa.

Taking No. 1 first: Industrialism in South Wales and South Africa are in different stages of historic development, whilst in Africa we witness the virtual imprisonment of native labour, divorced from their tribal way of life and packed into industrial compounds. South Wales has long since passed the coarseness and brutality practised in the early days of her industrial revolution.

(2) The educational movements which started in Wales as philanthropic ventures, inducing the workers to accept earthly woes in the hope of heavenly reward, have long since been replaced by government authority when it became realised that industrial Capitalism, for its own sake, must take a real interest in the education of its future wage slaves. In South Africa the missionary school is coming towards the end of its reign; here, too, the government is concerning itself more and more with education. The latest step in this direction—the infamous Bantu Education Act, though causing concern and minor unrest in Church circles and among other well-meaning people, is but a logical step in the “progress” of Capitalism in Africa—especially Capitalism with a strong Nationalist party in power; which brings us to:

(3) The increase in Nationalist power in South Africa, with its increasing pressure on the native population, has evoked strong protests from groupings of all kinds among the white section of the community. Women’s leagues are forming in battle array against Styrdom, intellectuals are speaking on behalf of the downtrod native, novelists like Alan Paton and parsons like Michael Scott and Trevor Huddleston, proclaim the indignities imposed on their “black-brethren.” Whilst many of these people are sincere in their endeavours, they cannot see that “colour bar” Apartheid disease and all the other injustices are not a Cause in themselves, but an Effect. The cause is the system of Capitalism.

Nationalism is quite popular these days in South Wales. It has not committed any atrocities here as yet for many reasons; first, it is not yet unified (there are two Nationalist groups), and secondly, and most important, not being in power it cannot legislate. Nevertheless, true to the conflicting picture that Capitalist society presents, it has its supporters and its influence. History is, of course, invoked and the injustices of the past imposed on Wales are cleverly used by the Welsh Nationalist press. Nationalist influence is capturing the minds of many who are disillusioned with the Labour Party. Local education policy is setting up more and more Welsh schools (a form of child segregation by language qualification); teaching posts are more and more subject to language qualifications; certain newspapers are playing up to the revival in Nationalism, and the Welsh League of Youth is spreading its membership into more and more schools and villages. On the surface much of this activity does not appear as Nationalism, some of it is really funny, like the situation mentioned in a South Wales town where women are driving non-Welsh speaking children away from their Welsh speaking playmates. (See Western Mail, 5/9/56).

No compounds yet; hardly as bad as South Africa, where a coloured person is not allowed on the streets without a pass after curfew, but still an unhappy state of affairs and pregnant with possibilities.
In South Africa, despite the segregation policy of the government (backed, in the main, by the Boer farmers), the Industrial Capitalists are not altogether happy. They know that a growing industrialism cannot afford segregation to the point required by the Nationalists. Capitalism does not care two hoots about national cultures, languages, or even pigmentation. It is interested in manpower (especially where human energy is cheap); we can, therefore, envisage better treatment for the native forced upon the government by the Industrialists—in the interest of Capitalism.

In Wales, strive as they may, deplore as some may, the passing away of native culture and perhaps the language too, is inevitable if Capitalism is to remain. Industry demands it. If the Welsh really want to preserve their language and culture (and it is well worth preserving), they must get rid of Capitalism. Socialists in Wales, who at no time conceal their Celtic tongue (often using it to explain Socialism), fight for one world, rich with its infinite variety of culture, utilised and enjoyed by alL Until such time our message to both the Welsh wage slaves and the Bantu herded in the compounds on the Rand, is: “You have more in common with each other than you have with your respective masters, be they Nationalists or Nationalizers or just plain Private Enterprize Capitalists.”

From the December 1956 issue of the Socialist Standard

In recent years a great deal of attention has been focused on the problem of the ever-increasing casualty rate built up by the large number of fatal road accidents.

This problem is international in character, and is found in every country where modern transport methods are being used. As the fatal accidents go on increasing the social nature of the problem becomes evident, and governments are taking over the management of roads from local authorities and other voluntary bodies in an effort to devise ways and means of alleviating the worst effects, but without success. In common with other social problems, such as war, crime, health and poverty, very little progress is made towards a solution. In an endeavour to force people to follow a certain pattern of behaviour, new regulations are made and very severe penalties imposed on drivers. Road Safety campaigns are launched, and the clergy are prepared to denounce bad road users as sinners, but in spite of the application of these devices, almost to the point of persecution, the problem persists undiminished. The cause is quite evident, and is in fact recognised by various experts advising governments. For instance, Lord Derwent, chairman of the British Road Federation, at a conference in London on 17th September this year, made the following remarks: “There is not a nation in the world today that is so prosperous, so rich in resources, or so lacking in design and engineering skill that it can tolerate for further decades the utter waste of time, precious fuel and general wear and tear that happens every day in the traffic jams that are a blight on practically all major cities.” He also went on to state that “Seventy-five per cent, of Britain’s road accidents happened in built-up areas, where there were too many vehicles, too many pedestrians, and too many cyclists.” Similar opinions have been expressed from time to time by road engineers, safety experts, social investigators and motor and transport organisations, who have carried out a great deal of research in an effort to find a solution.

Most of the factors that lead to congestion on the roads are the result of capitalist development, and indeed are necessary to the furtherance of a capitalist economy—the transference of freight traffic from the railways to road transport services at lower cost and with greater efficiency (this also applies to passenger traffic), the need for mobility of labour, requiring quick easy travel at low cost, and the creation of large housing estates far removed from sources of employment. There is also a very large increase in the number of vehicles used by commercial firms providing low cost and efficient transport for directors, travellers and salesmen. The same facilities are required for people engaged in professional work, and those employed by local authorities. Add to this the many thousands of pleasure motorists and tourists to complete the picture of chaos on the roads.

The origin of many social problems is contained within capitalist society in embryo, and grow more or less at the some pace as its development. Since it is essential for capital to be invested in profitable projects, it is inevitable that the social problems must continue. The alternative is to change the basis of society from a capitalist economy to one based on common ownership, Socialism.