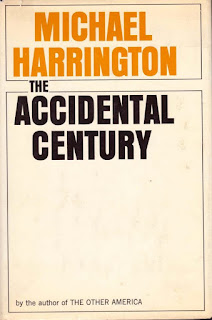 Next to the world-wide Moscovite movement, the largest phony "socialist" tendency is that which is frequently referred to as "social democratic," or, unfortunately, as "socialist." The Scandinavian social democratic parties, the Labour Party of Great Britain and the Socialist Party of America, are all of this tendency. At some time, social democracy could boast some able theorists. Now, however, it has a very low theoretical level. A recent illustration of this theoretical weakness is Michael Harrington's book, The Accidental Century.

The author is known for his book, The Other America, the fame of which is attributable to its stimulation of the discovery of poverty by the liberal press and mass media. The Accidental Century presents the author's general evaluation of the social developments of the last sixty years.

In the preface, the author acknowledges the inspiration of Norman Thomas, Max Shachtman, and Bayard Rustin. It seems incredible that this trinity of social democracy can be openly acknowledged as theoretical mentors. This in itself speaks volumes on the primitive level of social democratic theory.

The book seems addressed to an audience of "liberal liberals," that is, those who are so very, very liberal. In trying to appeal to this type, the author tones down the more radical implications—conclusions are gently suggested rather than boldly pursued.

One somewhat amusing aspect of the book is that the author has taken on the posture of a literary essayist in an apparent imitation of ex-radical writers like Irving Howe, who have landed jobs as professors. As a man of letters and serious literary critic, Harrington is a flop. His pretensions to scholarship are quite  "mid-cult." For example, there is not even a bibliography provided; nor are any citations given for the plethora of quotations. Literary allusions plus a hodgepodge of synopses of men and ideas do not add up to anything profound. Of course, no doubt,, Harrington makes some correct summaries of literary themes, but his whole process is reminiscent of the term paper of the college sophomore mercilessly carried to great length. Clever phrases, comments and thumbnail sketches are not enough justification for writing a book, let alone one that purports to present a serious political perspective.

The theme of the book is the decadence of traditional capitalism along with the institutions and ideas associated with it. Harrington sees some of these ideas as valuable and he laments the dangers to these ideas from the forces unleashed by capitalist development. The cause of this decadence is the undirected and unintended byproducts of technological changes. This "revolution," as he calls it (his terminology is imprecise), has "unsettled every faith and creed in the West."

This, one would think, would be generally welcomed by Harrington. Yet there is a definite note of ethnocentrism and cultural imperialism in his designation of useful ideas as "Western." He is really expressing sorrow for the decay of social democracy. Had social democracy presented a real alternative to capitalism, its decay would not have been so complete.

Harrington tells us " . . . the one set and undeviating principle of socialism is its commitment to making the . . . free choice of the citizen the principle of social life." A hundred and fifty years ago this expression of the ideals of bourgeois democracy would have been progressive. But today it ignores the recognition that democratic theories must be related to a social context. The social democrat never understood that the science of political economy is the heart of the matter. Democracy cannot exist on thin air; it refers to a social context. Specifically, where the social relations of wage labour and capital exist, democracy cannot exist. It is not that more planning is needed but that outmoded social relations must be abandoned. Socialism is not just that people get what they want; it refers to what can be done when people want and get a different society with different social relations. 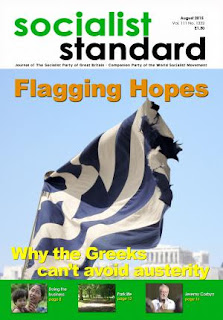 The Material World Column from the August 2015 issue of the Socialist Standard
The 193-member General Assembly, the UN’s highest policy-making body, declared water and sanitation a basic human right in July 2010. The United States, Britain, Australia, Austria, Canada, Greece, Sweden, Japan, Israel, South Korea, Luxembourg, the Netherlands, Denmark, and Ireland all abstained. It has remained a pious resolution, a human ‘right’ that is yet to be implemented. Most developing nations have fallen short of meeting their goals on sanitation and the world’s poorest countries have been lagging far behind, according to a UN report.
The world has missed the Millennium Development Goal (MDG) target by nearly 700 million people. The UN has now vowed that the practice of open defecation must be totally eliminated by 2025 (yet another example of wishful thinking).  One in three people, or 2.4 billion worldwide, are still without sanitation facilities – including 946 million people who defecate in the open. The report says progress on sanitation has been hampered by inadequate investments in behaviour-change campaigns, lack of affordable products for the poor, and social norms which accept or even encourage open defecation. Today, only 68 percent of the world’s population uses an improved sanitation facility – below the MDG target of 77 per cent. At present rates of progress it would take 300 years for everyone in Sub-Saharan Africa to get access to a sanitary toilet, said the report. More optimistically in Cambodia latrine coverage has been increasing by 1.3 percent per year– a growth rate at which it could take more than 60 years for the country to be ‘Open Defecation Free.’
There are 41 million people who do not have access to a toilet in Pakistan and as a result they are defecating in the open. In India alone, there are nearly 600 million people (out of a total population of over 1.2 billion) without access to sanitation, according to the Water Supply and Sanitation Collaborative Council. The Indian 2011 census found that nearly 70 percent of rural households, as well as over 18 percent of homes in towns and cities, don’t have toilets.
The study says diarrheal disease, largely caused by poor sanitation and hygiene, is a leading cause of malnutrition, stunting and child mortality, claiming nearly 600,000 under-five lives every year. Where there is open defecation, pathogens spread quickly, causing diarrhoea, cholera, bilharzia (caused by freshwater worms) and other diseases. More than 1,400 children die each day of diarrhoea-related diseases linked to a lack of safe water, basic sanitation and good hygiene.
Inadequate facilities also affect education and economic productivity and impact the dignity and personal safety of women and girls. Women across rural India are stalked by sexual predators and raped or molested when they venture out into the fields at night. In one such incident two teenage girls from the village of Katra Shadatganj (228 km southwest of New Delhi), were raped and hung from trees. Since then, at least four other similar cases have been reported in the same region. It subsequently emerged that each of these women came from homes that did not have toilets, and were accosted while attempting to relieve themselves at night. The truth is that the ruling elite (that's the government and multinational corporations who own the country) do not care for those living in abject destitution. India is the world's biggest arms importer. It budgets tens of millions on a Mars space programme. It is spending its money on crap. As far back as 1925 Gandhi said ‘Sanitation is more important than independence’.
The spectacle of ‘socialists’ seeking to improve capitalism on behalf of the ruling class has a long history. During the early 20th century in America grew a movement called ‘sewer socialism.’ In the Britain the term was ‘municipal socialism’. It sought to reform capitalism on the local level by cleaning up neighbourhoods with new sanitation systems and municipally-owned water supplies. But ‘sewer socialism’ has gone down the stinking drain as a step in the direction of socialism. The socialist transformation of the political and economic system is absolutely necessary to stop the waste of valuable resources on senseless wars and to raise the living standards and quality of life of the vast majority of the population. A socialist party deserves the name only to the extent that it acts towards that necessary social revolution, nothing less. Capitalism is shit: let’s flush it down the toilet.
ALJO
Posted by Imposs1904 at 7:15 AM No comments: