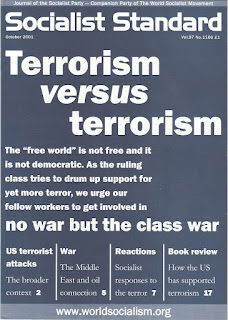 From the October 2001 issue of the Socialist Standard


We reproduce below reactions to what happened on 11 September from Socialists in various parts of the world as posted on the World Socialist Movement Forum.

Today at the community mental health center where I work, as at workplaces all around the United States, work has basically come to a beautifully silent stop. Television has just won a Permanent Revolution, as the news goes from bad to worse, and the number of viewers explodes from the moderate to the extreme.

My workplace just had a prayer vigil for the dead. I chose not to attend, even though I am also feeling sick about the entire affair. But it is only an intensification of the nausea I feel every day living in a market system of owners and nonowners. The collapsing World Trade Center was the symbol of only the temporary fall of the businesses that held offices there.

The Phallus has descended, but only for a short time. After the tragic death of thousands of workers (and capitalists too), there will be a glorious Reconstruction. The Spectacle will see to it. Military efforts will ensure that the guilty are found, and the buildings in Manhattan will be rebuilt, whether or not the city chooses to reconstitute the World Trade Center itself.

Business will go on as usual. In fact, the spirit of reconstruction may even benefit it. Millions of human lives will continue to be sacrificed for the profit of a few. Millions around the world will continue to starve. Millions of children in the United States alone will continue to spend their childhood abused, or neglected in noisy, smelly and dangerous ghettos. We workers will all return to work, and the nightmare of capitalism will resume. Blood will be swiftly donated to the injured by millions of generous citizens. Yet the system too will get its new blood.

I do feel terrible today, profoundly depressed. I really wish I didn't, but I just do, I can't help it. I don't know if some of you are also feeling angry. But underneath there is a gnawing mourning we must all tolerate. "Get a handle on your feelings, man, there is work to be done!" the Spectacle will whisper. "Rebuild Southern Manhattan and the Pentagon, and rekindle your nationalism and hatred of people from other lands." All around us, folks will volunteer their efforts, and the basic goodness and humanity of our species will show its strength and its supportive, loving, quality. But this will not lead to a social revolution from a system of private or state ownership to a moneyless and stateless system of common ownership of the means of life, much as we all could use one badly in this endlessly violent world in which we do not feel safe.

No, the Spectacle will portray the negative image of that glorious vision of freedom and community. For the community action we witness on television will attempt to mask our essential passivity. National togetherness will shroud our apartness. Revenge upon the terrorists will deflect our hatred of work. Our mourning will obliterate our celebration of life. Our trauma will disempower us. Our national strength will weaken us. The world of appearance is as topsy-turvy as Marx and Feuerbach showed Hegel's reality to be.

Which is why we must preserve our critique of the totality. It is also why we must refuse the Spectacle. For only in our critique of the totality will our mourning, our strength, our trauma, our love, be real. Only in our critique of the whole system may we hopefully one day witness the world centers of trade really come down, and not merely the mere illusion of its collapse, even though it was a grander production than even Hollywood could have mustered with the budget of a thousand Towering Infernos. The wasteful dead are lining the streets. Their death sickens me. But in the land of death, they have only come home, while in the land of the living, we have yet to build one.


I saw the news this morning
a tower all in in flames
I saw the ones about to die,
I didn't know their names.
I watched the screen in disbelief,
an unbelieving eye.
The questions come into my mind
for who, for what, for why?

An angry mob confronts a child
on her way to school.
The plane crashed into a tower
by a willing fool.
Napalm raining from the skies
for all the world to see.
Dimensions of the madness
are all the same to me.

The war that's over there
is the war that's brought to home
To reap a bitter harvest
from the seeds that we have sewn.
For religion, dogma, bits of flag
and the things for which men kill,
For the lies that divide us
I'll say I've had my fill.

Reasonable people everywhere will deplore the events of the past few days in New York and will sympathise with those families who have lost someone. They will admire the courage and the unselfish acts that have been demonstrated by firefighters, police, medical workers and ordinary citizens who put their own lives on the line everyday to help other people and often go unrecognised.

We are frequently subjected to only the darker side of human behaviour, the selfishness, such as the despicable acts of deliberately killing thousands of innocent people, the acts of terror to promote a particular end. The people who commit these acts believe that the end justifies the means. The exact opposite of what World Socialists say, that the means and the end must be consistent. That to bring about a truly democratic society it can only be brought about democratically.

Whether these acts of terror are carried out by individuals, private organisations, or acts of war declared by nation-states against other nation-states, (and legitimised by them because they say it is in their interests to act in this way), the terror is exactly the same for the victims.

It is no less a tragedy if wives lose their husbands, children lose their parents, or parents lose their children through the act of a single terrorist or group of terrorists, or through the official government-ordained act of an official military executioner. The end result is the same, tragic and needless loss and human suffering for the victims and their families.

"Legitimate" acts of war are seen as being necessary, and in the interests of a particular nation state that is being threatened directly, or by the economic interests of another nation state, or group of nations. What are the interests that are being threatened? They are either territorial expansion or access to resources. Who is it that requires access to these territories or resources? It is the exploiters of resources, the private corporations who look to local governments to grant them access, for payment, (royalties), or to their own governments to use their coercive powers to "persuade" through denial of access to trade, or other economic embargos. Political groups who resist these pressures are seen as hostile. Those who lie down, who acquiese, are seen as friendly. When these methods fail, threats of aggression, or actual aggression are the legitimate acts of terror - war.

That is the way in which the capitalist system encourages exploitation of the worlds resources, the regular daily need to increase investment and exploit resources drives the aggression of governments to "defend" their interests, wherever they might be on the planet.

The machinery of war, planes, ships, tanks and all of the paraphenalia, are sold aggressively by all of the major powers as a legitimate industry for official acts of war. Land mines despite the horrible damage to innocent victims every day, are a legitimate commodity for governments to invest in. Over 800 billion US dollars a year are invested in the machinery of war according to the United Nations.

Individual capitalists may be opposed to war, many of them would rather have their money used for peaceful means, to "protect" people from war, another legitimate source of profit, and highly moral. Nevertheless, the acts of terror, legitimate or otherwise, are driven by the various groups protecting their right to legitimately expand "their interests", or by others to defend their own.

New York is one of the melting pots of world society representing all of the world's major cultures, I look forward to the time when people everywhere recognise that we have a common interest in preserving what is good in each of our cultures and sharing it with the world.

For a world society, caring for each other, and sharing with each other. One World and One People.

I was in Florida at the time of the attack and a few days after. This enabled me to see how the news was reported and commented on. When I got back to England I was able to make comparisons.

Not much difference really. If anything, the British tabloids were more bloodthirsty and revengeful than the American papers I saw. The letters to the press in both countries reflected majority patriotism and "gung-ho" militarism. But there was a minority who took a more critical view of the causes of violence, whether "terrorist" or governmental. The following, from the St. Petersburg Times of 15 September, is a good example:

"Our nation is now reaping the result of an arrogant, militaristic and interventionist foreign policy. But rather than acknowledge and deal honestly with the root causes of violent terrorist actions, most prefer to pound their fists and expound about a 'declaration of war' . . . This 'war' is clearly not about bringing the perpetrators of the September 11 actions to justice; it will end up being nothing less than a carte blanche for the launching of a military and economic offensive against designated 'enemies'', and to provide a rationale for stifling political dissent at home. The 'war' now being hyped in Washington will increase, not decrease, the probability of future attacks on U.S. targets by those who feel dispossessed and oppressed by U.S. policies."
Stan Parker (UK)
Posted by Imposs1904 at 1:23 AM No comments: