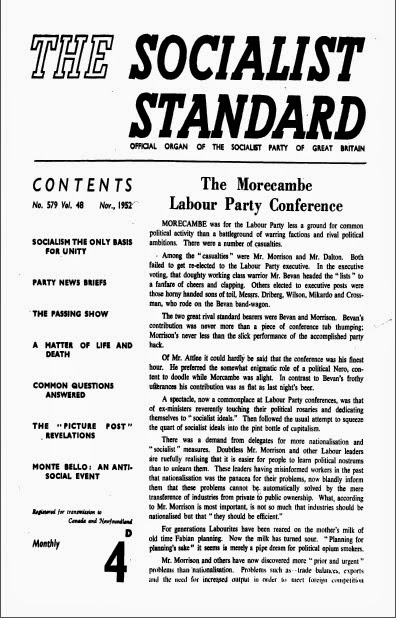 
A constant problem to small political parties is the finding of opportunities for nation-wide publicity. One organization which can have no complaints in this direction at the present time, however, is the Communist Party. Most popular newspapers and magazines have had in the past twelve months articles telling "the truth" about the Communist Party's activities, and "Picture Post" has lately weighed in with a series of articles in which the "inside story" is presented.

The author of these articles is Bob Darke, who left the Communist Party in 1951. In the course of eighteen years' membership, he held various positions in and on behalf of the Party, including that of a Borough Councillor; he has now joined the procession of apostates who have scarcely allowed the ink to dry on their resignations before bellowing their condemnation of the Party they so lately, and so long, embraced. One cannot, in fact, resist suspicion of the many whose "seeing the light" has coincided with the Communists becoming the villains of the contemporary political scene. It is worth considering also that Bob Darke admits having thought and behaved irrationally and deliberately misrepresent facts for eighteen years; on his own evidence, his story and his judgements should be treated with more than a little reserve.

In fact, there is little in Bob Darke's "inside story" that has not already been told in similar articles in other publications. Serious consideration of the Communist Party's aims or the theoretical suppositions on which its case rests is completely avoided. The articles deal principally with the Party itself. Bob Darke shows it is an organization with a relentless discipline, in which members are required to follow the "Party line" blindly and subjugate their individual ideas to those which are imposed on them by the Party. That this is true is well known. Its significance, however, is considerably deeper than is shown by Bob Darke.

The question of the organization and methods of the Communist Party is as old as its Russian parent body. The basic concept of a centralised, disciplined party was that which Lenin, after the revolution of 1917, tried to extend all over the world; it was the concept which led to the formation of the Bolshevik Party. It was first expounded by Lenin in 1902, in "What is to be Done?" and in 1903, at the second congress of the Russian Social-Democratic Workers' Party, it was embodied in his draft for the Party's statute. The draft was rejected in favour of Martov's, which aimed at a broad party of sympathisers, but when the delegates of the Bund, the Jewish organisation, withdrew, Lenin's supporters were left with the balance of voting power and used it to carry out their own wishes over the Party's constitution. Thus originated the Bolshevik-Menshevik feud, with its root in the Bolsheviks' conception of themselves as the highly organized Party leading the masses.

Was, and is, this concept a socialist one? Lenin did not draw it from his study of Marx. In one of his early pamphlets, he extolled the organization which was his model for a political party: Narodnaya Volya, the 19th century terrorist group with which the fanatical Nichaev was associated. The adoption of the idea of leadership of the workers by such an organization was, in fact, a rejection of the basic contention of Marxism. Marx saw the working class, through the development of industrialization and the constant increase in exploitation, becoming revolutionary; indeed, without this there could be no working-class revolution. Lenin, on the other hand, contended that the workers would never become revolutionary, and thus saw a necessity for his Party to be designed only as a group of leaders. It is interesting to note that at the 1903 congress the opponents of Lenin's concept stigmatised it as the prelude to dictatorship; the events in Russia from 1917 onwards, with many of those leaders holding political power, have borne out the prophecy.

Thus, the Communist Party's conception of the nature of a working-class political party was formulated in contradistinction from that of Marx. The behaviour of the Bolsheviks, in the years before they came to power, in many respects resembles that of Britain's Communists to-day. The Bolshevik cause was promoted by any means that appeared useful, and changes of policy were justified by Lenin's insistence that marx must be interpreted "dialectically." Any kind of dissent was branded with the word "Menshevism," just as present-day opponents are labelled "Fascists" or "Trotskyites."

At its inception in 1920, the Communist Party of Great Britain was committed, by its affiliation to the Third International, to a type of organization and methods which both were dictatorial. The "Statutes and Conditions of Affiliation" of the International included armed struggle and secret organization as clearly stated aims. The assumption of Lenin that the working class would never become revolutionary, was accepted; indeed, so far from seeking to spread understanding of capitalism among the workers, the founders of the English Communist Party believed that the capitalist economic system had broken down. This was frankly admitted in an article in "The Communist" in 1921, and for the next decade the Party's leaders continued to believe at every moment that capitalism was collapsing. The policy and administration of the Party became concentrated in a few hands, following the Russian model, until the membership was deprived of any opportunity to participate in the running of the Party and became, as it is now, an obedient rank-and-file. "Theirs not to reason why" is no less true of the Communists than it was of the Light Brigade.

Bob Darke shows his former self and his fellow-members as such obedient and devoted workers for their cause, accepting the unreasoning and often malicious discipline imposed on them; he fails, however, to make any suggestion as to why this should be. The key-word is "understanding"—or the lack of it. In spite of its Marxian pretensions, the Communist Party has thrived on lack of understanding. The supposition that the working class is incapable of becoming consciously revolutionary has provided a convenient justification for this; in fact, it is extremely well illustrated by Bob Darke's description of the methods by which Communist factions gain control of trade union branches. Far from making any endeavour to stimulate class-consciousness in the unions, the Communist tactic is to exploit the lack of it. In Darke's own words" "Our greatest ally was the apathy and indifference of the ordinary Trade Unionists."

Other examples are given to show how the Party membership itself is instructed to act without knowing the reasons for its actions. Perhaps here the hoary myth may be exploded that Communists are people who are more knowledgeable about society than most other workers. In fact, there is no reason for considering them to be superior in this respect to the members of, for example, the Labour Party or the Church of England; they have often identified themselves with the former, and at least one prominent Communist is a member of the latter. The leaders of the Communist Party are dependent upon the political ignorance of the membership as much as upon the political ignorance of the working class as a whole.

It must not be imagined, however, that Bob Darke is concerned with this aspect of the Communist Party. As was noted at the beginning, his articles are devoid of any serious consideration of Communist theory. Much of his "criticism" consists of the painting of unfavourable personal pictures of well-known Communists and even of allegations against them—for instance, that one member misuses money entrusted to him by his workmates. That is political warfare on its abysmal lowest level, and the only thing which might be said in excuse for Bob Darke's using it is that he probably learned it in the Communist Party.

Taken all in all, the "Picture Post" articles can hardly be said live up to one's normal expectations from "revelations." The only really valuable revelation of the Communist Party is the exposure of its fallacies and misrepresentations; and should "Picture Post" ever decide to do that, it need not concern itself with finding the latest adherent to the lengthening procession of penitent ex-worshippers of "the god that failed." The Socialist Party of Great Britain has maintained an attitude of analytical opposition to the Communist Party from the day of that Party's foundation. It has pointed out that the system in Russia is the same capitalism which causes the degradation of the workers in this country and elsewhere; that the aims of the Communists, if they were realised, would bring nothing but the continuation of the same economic and social problems; that leaders—would-be revolutionaries as well as the rest—can offer nothing to the working class. A party which bases its policy on the workers' lack of political understanding is, by that very fact, an anti-working-class party.

At the present time, the Communist Party is this country's scapegoat in the precipitate rush towards war. Capitalism has always to find scapegoats because the workers must always be persuaded to accept war, crises and hard times. The Socialist Party's criticism of the Communists has remained the same, whether the Russians have been "gallant allies" and their supporters have basked in reflected glory, or whether they have been regarded as villains of the deepest dye. The socialist case is one of opposition to capitalism and the political organisations which support capitalism; that opposition extends no less to the Communists than to those who now attack them to further the ends of British capitalism.