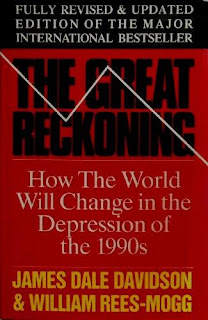 From the August 1994 issue of the Socialist Standard

The Great Reckoning by James Dale Davidson and William Rees-Mogg (Pan, London, 1994 £7.99), subtitled "How the World Will Change Before 2000", aims to be prophetic. It foresees rocketing taxes, worldwide stock market crashes, a further fall in the property market, a collapse of the welfare state, social disintegration writ large, petty nationalist squabbles and terrorism.

The odd thing is that its authors are both gung-ho supporters of the very system - capitalism - that is capable of unleashing such horror, and find no contradiction in their position. They view the economic basis of capitalism as being fundamentally unstable, yet their advice is only to those already wealthy enough to be able to use their capital to their own advantage in the coming economic crunch. No talk of revolution here.

Nevertheless, The Great Reckoning is a fairly sophisticated book, which is unusual for one that prophecies a Doomsday scenario. Central to its analysis is its prediction of a 1930s-style economic crisis from which other dangers will follow. Davidson and Rees-Mogg claim that there are two main reasons why the world capitalist economy is in for a major period of slump. One is taken from the Austrian Physicist Cesare Marchetti who has spent time analysing the penetration of innovations and products in the capitalist economy. Marchetti dispenses with price-analysis and deals only in physical quantities, claiming that the penetration of commodities into markets can be equated with the spread of living species. He has, for instance, argued that the growth and spread of motor-cars into Western Europe can be explained by the same logistic equation that describes the penetration of, say, rabbits into Australia. Ten years ago Marchetti claimed that most of the markets that provided the spur for the post-war economic boom, like motor-cars, had become saturated. This, he reasoned, would mean economic slowdown.

Economic Slowdown
Marchetti's argument doesn't fully take into account that technological innovation is itself a spur to capitalist growth and that the "old" industries are forever being replaced by new ones - and continue to be so. If capitalism is true to its development so far, the industries supposedly at the point of market saturation today will be heard of only in history books in the future. It should also be noted that devices exist - from proverbially "reinventing the wheel" to built-in obsolescence - which ensure that the long-term growth in cars, televisions and many other lines of production continue apace. There used to be near-physical market saturation for black-and-white TVs, but did that stop growth in the market for television? - Hitachi, Sony and Ferguson are testament to the fact that it did not. The manufacturers replaced black-and-white with colour, then brought out VCRs, then replaced colour mono with colour stereo, then stereo with surround-sound. Market saturation disappeared in a flurry of pound notes and dollar bills.

In truth Davidson and Rees-Mogg have a far better argument than Marachetti's to justify their view of the major world economic slowdown. Their second, more plausible view, is that capitalism is currently drowning in an ocean of debt:


Debt cannot go on compounding faster than output forever. At the rate it expanded in the United States in the 1980s, interest payments would consume 100 per cent of GNP by the year 2015. No such thing will happen. Long before debt reaches that extreme, it will be wiped away...One way or other we expect a great reckoning. A settling of accounts. We expect the long economic boom and credit expansion that began with World War II to come to an end. The end, when it comes, will not only reveal the insolvency of many individuals and corporations, it may also bring bankruptcy to the welfare state and breakdown of authority within political economies.

There is more than a grain of truth in this. In many world economies, debt is compunding at a faster rate than income and total world indebtedness, by every yardstick that can be named, was heavier at the start of the present slump than at the beginning of any other. In the United States alone the rate of debt to national GNP is now 195 percent, compared with 120 percent before the 1929 crash.

History has demonstarted that sustainable recoveries only begin when a considerable of debt built-up during the boom has been liquidated. If debt liquidation is insufficient, growth will remain sluggish even when "recovery" has supposedly begun, such as at present. Davidson and Rees-Mogg estimate that the amount of debt still to be liquidated during this slump in the US is three to four trillion dollars-worth.

The extension of credit effectively delays the onset of capitalism's periodic economic crises only to make them worse when they finally occur. In all economic booms some industries over-extend their operations in the pursuit of further profits and find that they have overproduced for their particular markets. A case in point in the present slump was the commercial property sector.

Perilous Situation
While some industries get into difficulties, other sections of the owning class find that their profits are increasing. The banks, acting as intermediaries between the buyers and sellers of money capital, lend out their accumulated capital to the enterprises in difficulty to keep them going. But this cannot generally correct the fundamental disproportion in growth between the industries and uneven expansion in relation to market demand. Through knock-on effects in industry overproduction spreads and the demand for money capital rises, pushing interest rates up. In this way, the mechanisms of credit extension in the capitalist economy papers over the underlying weaknesses in the productive sphere and buys firms some breathing space before the crisis comes - and this usually comes when the demand for credit is highest and interest rates are at their peak. However, the ultimate outstanding debt increases through this process, requiring a much greater "correction" in the slump as capital assets are devalued to bring productive capacity back into line. The result is not merely an industrial slump, but a financial, banking and property crash as well, as in the 1930s.

Davidson and Rees-Mogg see this as the present outlook for world capitalism. Mounting corporate, government and personal debt has placed the world economy into its most parlous situation for decades. They are all too aware that the only way out for capitalism, sooner or later, is a financial reckoning which will bring about a growth in poverty, a reduction in social welfare programmes and possibly more armed conflict between nation states.

Their analysis of the situation ends there. There is no prescription for how the slump can be avoided - we must just let it wash over us. The authors are completely blind to how the world might be organised to avoid financial slumps, without the market mechanisms which causes them in the first place. They dismiss the Soviet Union's model of capitalist planning out of hand, as well they might, but in doing so claim that this proves socialism to be an impossible dream. Particularly crass is a chapter on the fall of the Eastern Bloc - which socialists predicted - containing the assertion that this demonstrates the failure of Marxism. Indeed, some of the comments in this chapter, like the assertion on page 188 that workers exploit capitalists rather than the other way around, defy rational analysis and are completely at variance with the otherwise coherent account presented. But, of course, the likes of Davidson and Rees-Mogg want workers to think that there really is no alternative to capitalism, however bad it may be, and that, despite everything, workers still get a good deal out of the system. Unluckily for them some of us know different.
Dave Perrin
Posted by Imposs1904 at 10:31 AM 1 comment:

Weekly Bulletin of The Socialist Party of Great Britain (78)

Welcome to the 78th of our weekly bulletins to keep you informed of changes at Socialist Party of Great Britain @ MySpace.

That time of the year is almost on us
When department stores will cheat and con us,
Trying to steal our money from us.
So you'd better watch out because
There's a fat old jolly bloke
With the long white beard and the bright red cloak,
Who'll do his best to send us broke?
It's Santa Bloody Claus.