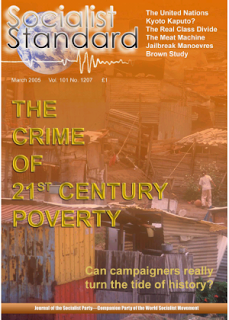 From the March 2005 issue of the Socialist Standard
We’re supposed to be moving towards a more equitable society. Well how come class division is worse than ever, asks Paul Bennett

From the September 1933 issue of the Socialist Standard

The "Dole" and the Workers

"What is the effect of the dole upon the mental attitude of the workers? Does it make them more acquiescent towards capitalism"

The question hails from America. This in itself is instructive. A few years ago various prominent English labour leaders and an odd capitalist or two, like Lord Beaverbrook, were advocating the adoption of the alleged "high-wage policy" of American employers. Now the American capitalists are seriously considering the adoption of the British system of State unemployment relief known as the dole. The "high-wage policy," so far from curing unemployment, has, in America, failed to prevent its rapid and enormous growth. Goods have been produced far in excess of the ability of the workers there to buy them back with all their "high wages." We have to note there, as in England, the sharp curtailment of production, wholesale dismissal of staffs, and all the rest of the characteristic methods of the capitalists in the endeavour to weather the "crisis," including drastic wage reductions.

The system of unemployment insurance was not patented in Great Britain. It was adopted nearly a quarter of a century ago by the Government of the day and applied to a few industries on the basis of foreign experiments. A few years previously Joseph Chamberlain had initiated his campaign for Protection, "to cure unemployment." "Look at Germany!" he said. "Under Protection her industries have forged ahead until their products capture Britain's markets." The Liberals looked at Germany, beheld unemployment rampant there as elsewhere, and also observed a State insurance scheme, which they proceeded to copy. It appeared in their eyes to be a more economical and efficient method of controlling the unemployed than the system of parish relief; and, with the dislocation of the labour market following the war, even Conservative Ministers helped forward its rapid extension to the majority of industries.

The system of parish relief, inherited from the days of Queen Elizabeth 350 years ago, was designed to meet a situation long before large-scale production had brought large-scale unemployment in its train. It had definite drawbacks from the point of view of those capitalists who had to pay rates upon property in industrial areas. They sought to spread the burden over the entire master class of a national scheme. From the standpoint of the unemployed the change in practice means no more than this, that they are paid relief out of the national exchequer instead of locally, and they are periodically badgered by courts of referees instead of by boards of guardians. Under the national scheme they now have six months' respite before the badgering starts, but for this privilege they have, while in work, made compulsory contributions. Since the advent of the National Government in 1931, the "means test" has gone far to lessen any difference between the two methods of securing workers' quietude.

Without some form of relief of the destitute, whether on local or national lines, it is obvious that there would be an enormous increase in crimes against property, ranging from petty thefts to wholesale riots. This, of course, would involve a correspondingly large increase in police activity and expenditure in connection therewith. In any advanced industrial country this is the consideration which induces the master class to adopt some form of public relief in the place of haphazard "charity."

There is no evidence, however, that in the absence of the dole, or some equivalent, the workers would become revolutionary. Such a mental change implies much more than mere discontent with the extremes of poverty resulting from unemployment. In spite of the enormous increase of unemployment in America in recent years and the absence of a system of doles, we do not hear of any rapid increase in the number of Socialists there. On the contrary, the very immediate urgency of the needs of the unemployed prompts the non-Socialist majority of them to give ear to those who promise them "something now" —Roosevelt, for example. They ignore Socialist propaganda as they do when in work.

Similarly, in Britain the establishment of the dole has not altered one way or the other the essential obstacles in the way of Socialist propaganda. Just as workers in employment can be gulled into accepting the fallacy that wage reductions are necessary to enable their master to recover their "share of world trade," so the unemployed can, in large numbers, be persuaded that a reduction in their paltry benefit is necessary to "national stability and financial integrity." The election results in 1931 is eloquent of this. Vast numbers of unemployed voted for the Parties which promised to cut their unemployment pay be 10%.

On the other hand, Socialists do not barter their political support for doles or promises of other reforms. The notion that the revolution is being held up by the existence of the dole is nothing short of ridiculous. This notion found expression (in a typically confused fashion) in the general election of the Communist Party for 1929. On page 25 they declared that, "The capitalist class of this country have been compelled, as an insurance against revolution, to introduce many schemes for the amelioration of the conditions of the workers." This, notwithstanding that four pages earlier they had declared that "the struggle for reforms in the present period leads to revolution." However, the existence of the dole can hardly be blamed for the muddle-headedness of those imagine that revolution can be advanced by "struggling" for "insurances against it."

The mass of the workers, employed and unemployed, accept and support capitalism because they do not yet realise that it is based upon their own enslavement and robbery as a class.

They do not realise that wages and doles represent but a fraction of the wealth which they actually produce to-day, and which they could increase and enjoy to the fullest extent under a system based upon the common ownership of the means of living. They do not realise these things because they are slow to think; slow processes, however, have the advantage of being sure. Socialists rely upon the development of the workers' capacity to think, a development which is forced upon them by the incessant class struggle. That struggle grows more glaring and more intense with every step in industrial progress, and when the workers eventually recognise its existence as such, no dole or other reform, nor promises of reform, will cause them to deviate from the revolutionary path.

Sweeping aside the parties which depend upon this type of appeal, they will organise to establish their supremacy in society in order to refashion it in accordance with their needs.