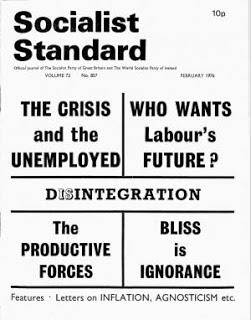 What has happened to civilized society when the very purpose for which it is organized cannot be achieved? That purpose is to produce and secure the means of livelihood for all members of that society. This has always been the aim of men throughout history. The way in which this was done, and the way in which men were related to their means of production, provides the key to the understanding of human progress. At every stage in the history of civilized society, that is society based on the division of labour, men organized in social classes have fought over the issue of which social class will dominate the source of society’s wealth and the means of its production. It is only through this struggle that man has made the tremendous leaps forward in the building up of the productive forces at the disposal of society. This antagonism between the classes has produced chapters in history of bloody violence, cruelty and famine on a colossal scale, but without this class struggle the productive forces of society would never have been developed. By developed, we mean that the social organization to produce wealth is equal to any normal social demand which may be made on that wealth.

Production in every sphere has eventually won the battle of science and technology. There need no longer be any natural or physical barriers to the production of wealth, yet there is a constant struggle for survival, and millions do not survive at all. The Oxfam organization claims that 15 million children die annually of diseases caused through malnutrition, whilst the United Nations Food and Agricultural Organization expects the over-production of world dairy products to persist during 1976 (Times, 5th Jan. 1976).

"New Higher Relations"
The working class of all countries is the greatest productive force of all, but they are not aware of it. They regard the productive forces and the political and economic organization of society as something beyond them in which they play no part. Their main preoccupation is with the wages system and the constant fight against capital. This blinds them to the real state of social progress and the potential of production. In the real world, wealth is literally begging to be produced and consumed, whilst the world as the worker sees it consists of organized poverty and scarcity. This arises because of the way the economic structure of capitalism is organized. The working class is related to the means of production by wage-labour and capital, and these are basic conditions of production within capitalism, and no production can take place outside of these relations. These relations of production presuppose the existence of private property in the means of production in the first place, and the private ownership of the products in the second place. The products must be sold or exchanged under a monetary system and this constitutes a further relation of production.

The simple world of production where men reciprocate with nature and where wealth is produced is real enough, but its basic purpose has been obscured. Looking at this weird world of capital and commodities, we find that the productive forces do not exist to produce wealth at all: they exist to produce capital. That is, their function which is to provide the best existence which man can wrest from nature is subordinated and suppressed in the interests of the accumulation of capital. This accumulation can only be achieved by the sale of commodities, which is the economic form wealth takes under capitalism, and which contains within them that proportion of the unpaid social labour which is ultimately converted to capital. Provided there is a continual outlet for goods on world markets, the capitalist can continue to amass and re-invest capital. In the early years of capitalist development, particularly in Great Britain in the late 18th century, there was a market waiting to be served. Society had just moved away from Feudalism with its restricted production and growing population. This gave a tremendous impetus to the development of the productive forces. New inventions and scientific discoveries revolutionized the productive process, but above all, the greatest productive force of all was human labour-power which became a commodity under the domination of capital. The old conditions and relations of feudal production were swept aside by the new ruling capitalist class. Handicraft was replaced by manufacture, serfs were freed from the soil and forced to become wage labourers, merchants were permitted to employ wage-labour where they had previously been debarred. The restrictive practices imposed by the Guilds and Corporations regarding apprentices and journeymen, with fixed quotas of production and monopoly in distribution, were abolished. The rising capitalist class wanted unrestricted production. Therefore new relations of production had to be introduced. The relations of wage-labour and capital arose together with the establishment of private property in the means of production by the separation of the labourer from his means of production, which was mainly the land. The new system of production was vastly superior to feudal production, and the new relation of wage-labour and capital was consequently higher. Social progress, as measured in terms of production, was capitalism’s contribution to mankind.

Contradictions
However, by the year 1825 the first major commercial crisis took place. The seemingly bottomless market had been saturated. Since then, crisis after crisis has taken place up to the present time with similar effects, and by their periodic return expose more and more the contradictions of capitalist society. The forces of production cannot comply with the laws and conditions governing their use. If commodities cannot be sold beyond a certain point, and a surplus accumulates, the productive forces cannot be allowed to produce beyond this point. Capitalist crises arise precisely because of over-production and a shrinking market.

There is a point of view which holds that capitalism can take crises in its stride on the hill and valley principle. It probably could, were production the only consideration and the capitalists were completely free agents. Unfortunately for the capitalist, capitalism is a political system as well as an economic one. Politics involve people who, for the most part, are members of the working class. This is the class capitalism depends upon for its very existence. Whilst the ideal capitalist production arrangements would be to hire and fire, and displace labour by the introducing of machinery, the social and political consequences would be unpredictable. Workers would not accept without a struggle the loss of their livelihood through unemployment. As it is, capitalism is unable to use the available labour force, as world unemployment figures show. America, the largest capitalist country, has an unemployment figure of over 8 millions.

According to Marx, no society ever goes out of existence before all the productive forces for which there is room have been developed. The productive forces, which consist of labour, machinery, natural forces, electricity, steam, etc. and the earth itself, navigable rivers and other means of production, have been developed since 1825, the year of the first general crisis. What has happened since that period is that there has been a constant struggle between capital and labour over the introduction of labour-saving machinery. This amounts to the displacement of one productive force by another, and is not a development. Neither is the increased productivity of labour, which is an expansion of capital. Also the replacement of steam by electricity is not a development but the displacing of one motive power by another. Neither is it correct to claim that the introduction of up-to-date machinery is a development. Before up-to-date machinery can be introduced, existing machinery must be scrapped, which means that capital must be wasted.

Out of Control
The real way to consider the efficiency of the productive forces is by their technical and social capabilities: that is their ability to produce wealth in the concrete form—use value, irrespective of any market considerations. The social powers of production are related to the size of the population, but as the world population grows, the proportion of the population doing productive work is becoming smaller. Every increase in the productivity of labour through introducing machinery, which arises mainly from competition between capitalists for market supremacy, will cheapen the products, but only by creating more of them. A constantly diminishing number of productive workers will support an increasing population. Capitalism however cannot physically remove its relative surplus population and has to find them employment outside the productive labour process. Thus we get hordes of civil servants, salesmen, insurance men, advertising men, public relations men, office workers, and an ever-growing army of bureaucrats, lawyers, politicians, journalists, etc. etc. To bring this section of the population into useful production from whence they have been removed would undermine the whole productive and marketing process. There are no new markets, and neither did the development of the backward countries create new markets in the strict sense. Capital has been exported to the backward countries for over 200 years, and such development as is taking place is done at the expense, so to speak, of the old capitalist colonialists. It is not a development of the productive forces, which are world-wide not national. Competition between capitalists does not produce more surplus value, it moves it to the large capitalists.

Greater productivity is always given as the key to the prosperity of the working class, but greater productivity produces surpluses. Surpluses which cannot be sold result in the laying off of millions of
workers, and the enforced idleness of large sections of the productive forces. Use value can be produced without exchange value, but you cannot have exchange value without use value. Without exchange value you cannot have surplus value, and therefore capital cannot be accumulated. The productive forces are subject to the property relations and the conditions of capitalist production, and these conditions inhibit their proper function, which is to serve society and not capital. The productive forces are fettered, and the powers of production are in rebellion against the conditions of production.

Capitalist society is like the sorcerer’s apprentice who was unable to control the magic powers he had called up by his spells. When this point is reached, the forces of production have come into conflict with the social relations under which they have previously been developed. Social progress demands that there should be a change in the social relations. Men must be related to their means of production without the restrictions of wage-labour and capital. The existing mode of production must be scrapped, and this can only be done by the introduction of a system of production based upon common ownership. Socialism. This is the highest form of industrial and economic relations which can be devised by man. This will be in line with the historical mission of the working class, and mankind will finally conquer the problem of poverty.

Revolutionary consciousness is the recognition that the social powers of production must be brought under social control. This can only be done by the working class using their political power to establish common ownership—Socialism.