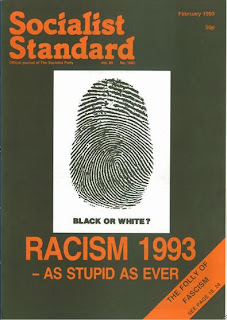 From the February 1993 issue of the Socialist Standard


It is too easy to hate fascists. The sight of chanting skinheads, half Stormtrooper of the Year 1932, half late adolescent tantrum, fills us with memories of a genocidal past and fears that the jackboots are being polished up again. Ridiculous screwballs stand in East End markets with swastika tattoos, boots for brains and snarling detestation for the world in which they are impotent merchants of mean-spirited outrage.

What are we to say to them-think of them? "Drive the Racists of the Streets!" says the wallposter from the people who brought us "The Socialist Motherland". But who would be left on the streets except for rival sects of Leninist paper sellers arguing over whose central committee will make the most effective job of dictating over the proletariat? There are hundreds of thousands of racists on the streets. There are one or two in most of our houses. Are we supposed to give them all a good doing? And what good is a sore head to a racist-racism thrives on battered minds.


It is all too simple to paint caricatures of the monstrous jackbooted swine. TV pictures show us them in Germany, spewing hate before them, like primitive fertiliser spreaders. Not just murderous thoughts, but now they burn and kill and rejoice at the suffering of their enemies. Just like British workers did when bombs fell on Iraqi cities and who knows how many burned to death or were crushed in an underground medical centre. And when the conscripts met their death as the Belgrano sailed away from the Falklands exclusion zone, were not we told by the Mad Priestess that we should rejoice at the victory. Rejoice as men drown and babies are buried under rubble and bombs unknown to the non-professional terrorists explode with priestly sanction. Where does war stop and monstrous atrocity start?


The fascist moron follows his leader. The comical sight of fancy-dress Nazis doing their Mosley impressions to a few dozen Bash Street Kids from Povertyville is almost worth a smile. Of course, nobody will be smiling when the petty-fuhrer's words have been heard and another black family gets a petrol bomb or kicking on the way home. But there is an amateurish hooliganism about such viciousness: not an army but a venomous gang of no-hopers.

The military moron follows his leader and is paid well for it. The barking, and often barking mad, fuhrer is given medals and "our boys" are allowed to play with more than home-made bangers. The pseudo-militarism of the neo-Nazi boneheads, drilling in Hackney Marshes for the day when Enoch gives the word to get the Asians, is all rather ridiculous. Not so the official military training camps where violence is taught as a respectable art.


Fascists breed on false divisions. They seek to turn us against each other, as if life is not hard enough having to share the misery as one unhappy family. But what is new about the propaganda of Divide and Rule? it is the basis of all nationalism. "He's one of our lot; he was born under their flag. He is our enemy". Fascists might be the ultimate flag-fetishists, grasping on to their little Union Jack rag on the end of its pointy stick as if it is their lifeline to lunacy, but they did not invent them. The flags, and all the other emblems of nationalist idiocy, were here long before boys with muscles and not many brain cells decided to call street violence a political philosophy.


Let's rock against racism, by all means, but let's do a bit of rocking against nationalism while we're at it. How often is it the case that the right-on lefties who want to smash all racists find no difficulty in supporting the narrow bigotry of trendy nationalism?

So, why fascists? What horrible moment in history set in motion such movements of undiluted venom? The dung-like soil in which fascists are bred is fear. Because behind those hard-as-rock, we're gonna-get-you looks of enmity to the world, what we are seeing are a load of frightened people who are confused, threatened and deeply alienated from their social selves. The fascist is the human who aspires to be antihuman. The social nature which allows us to co-operate allows them to seek refuge in artificially constructed groups based on skin colour, flag colours, football team colours-colour-blind fascists often have a hard time with their pseudo-identities. The unique ability to use language is adapted by the fascists into a snarling, animalistic rage of incoherence. Rational discourse is swapped willingly for brute feeling. That is what the fascist wants life to be. Everything else seems to have failed.

It is a miserable, frustrating and disempowering alienation which is the lot of many under the profit-system-and so many more than those who are foolish enough to go down the fascist path-which is at the root of the fascist mentality. Alienation from a society where life as a conscious being seems unimportant and negligible leads some perhaps many-to seek comfort in the false security of national, racial and vanguardist loyalty. As the squeeze gets tighter, with a deepening world recession and the collapse of the elementary security offered by the welfare net, is it any surprise that new size twelves are slipping into new jackboots in the futile search for an honourable place within capitalist history?


The psychology of despair is one of the main symptoms of a society which converts the vivacity of the individual into purchasable chunks of labour power to be bought as cheaply as possible-and often left on the shelf to rot. The fascist mentality is part of the rot. And just as you don't blame the woodworm for the damp and dingy wall in which it thrives, it is futile to blame the rotten fascist for the stupidity of his position.

Fascism is a celebration of irrationality. The National Front should be called the Irrational Front. The confused wage slave is capitalism's very best friend. And confused, irrational, unscientific thinking will not be cured by socialists learning to fight better than the fascists. When it comes to brutality we are willing to come last. What the fascist needs is to be hit in those cerebral parts least used and most in need of life support. What the fascist needs, in fact, is to be educated by those who him not as a despicable fascist, but as a bloody stupid worker.
Steve Coleman
Posted by Imposs1904 at 5:03 PM No comments: