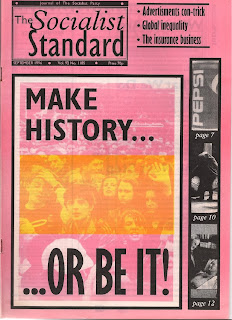 TV Review from the September 1996 issue of the Socialist Standard

Last month this column berated Channel Four's Secret History series for its tedious and irrelevant programme about the tactics of the British army during the Falklands war. This month we return to the scene of the crime, battered by two weeks of heroic British failure at the Olympics and endless summer repeats of second-rate sitcoms. On 8 August—like a diamond glistening in a vast cow-pat—Secret History redeemed itself with a documentary called Mutiny In The RAF. This, at least, was a secret history worth commenting about, centring on the massive wave of strikes which broke out in the RAF after the end of the Second World War in India, Singapore, the Middle East and other centres of British imperial rule. Largely due to the activities of the British ruling class, few will have been cognisant of the facts surrounding this series of mutinies against military authority, and the documentary team compiling this particular programme can be satisfied with a job well done.

The British bourgeoisie—one of the most experienced ruling classes in the world—has long done its best to hide the real truth of the various mutinies and strikes in HM Forces throughout this century. For decades it tried to keep hidden the nature of the massive wave of discontent which took place in 1919 after the so-called Great War, when soldiers and policemen went on strike and mutinied, and when sailors demanding better pay hauled down the British Ensign and hoisted the Red Flag. For entirely understandable reasons it has tried to do the same in relation to the wave of discontent of 1945-6 too. Thankfully, it has failed.

Secret History told the history of how over 50,000 RAF servicemen refused to do the dirty work of British Imperialism in its outposts of Empire any longer. Serving in appalling conditions and with little chance of demobilisation, this mixture of volunteers and conscripts refused to obey their officers' orders, substituted self-discipline for hierarchical rule, formed democratically-run strike committees and successfully spread their struggle even to section's of the Indian armed forces. They were met with bogus trials and false imprisonment, harassment from the military police and the ultimate deterrent of threatened executions. Expecting sympathetic treatment from the newly-elected Labour Government under Clement Attlee, their actions instead were met with subterfuge and repression, characteristic treatment of workers by Labour governments before and since. That they eventually met with some success in ensuring early demobilisation for hundreds of thousands was a testament to their tenacity and the power of working-class combination. Not unwisely, the British ruling class took the view that to keep such disgruntled servicemen in troubled outposts like India at such a sensitive time was to invite chaos.

It was not, of course, the case that those who mutinied in the RAF wanted socialism any more than their fellow workers back home who had joined with them to vote in the pro-capitalist Labour Party the previous year—their struggle was in fact more akin to a defensive economic trade union struggle within capitalism. Indeed, many of the strikers had been active trade unionists before the war. But what it did got to show—like many other similar incidents across the world—is that men and women in the armed forces are generally workers in uniform. They are doing an unpleasant job on behalf of the capitalist class, but then again, so do millions of other workers. And just like other workers, those in the armed forces are capable of critically assessing their own class position and of coming to the conclusion that it is at odds with the position of the bourgeoisie. This is contrary to the unhistorical and anti-materialist position of so many Leninists who don't even regard members of the armed forces or the police as being members of the working class in the first place. It can also be added—far in advance of the Leninist vanguards—workers in uniform have demonstrated time and again that they can organise democratically and collectively, without leaders, to further their own class interests. This in turn demonstrates that the armed forces, like all other sections of the working class, are capable of developing recognition of their real position within capitalism and of the necessity of socialism.

The RAF mutiny in 1946 was a case in point and its lessons must never be forgotten. Working-class self-activity and democratic organisation is the key to any struggle whether for economic defence within the system (as with trade unionism) or for revolutionary transformation. As the movement for final working-class emancipation can only be collective and majoritarian, the former will surely still have an important role to play as the training ground for the latter.
Dave Perrin
Posted by Imposs1904 at 2:57 PM No comments:

Because we are a democratic Party all our meetings are open and our propaganda meetings organised to allow open debate. To this end visitors are given ample opportunity and encouragement to ask questions or state an opposing view. At a recent Socialist Party meeting a visitor from the SWP took the opportunity to explain how "the average bloke in the street", could be led to socialism by the SWP. Another visitor, obviously impressed, asked for further information:

Visitor: "Is the SWP a democratic organisation?"


Leader: "Yes."
Visitor: "Before I could join The Socialist Party I have to show my agreement and my understanding of the Socialist case. If I wanted to join the SWP I wouldn't have to mess about with that?"
Leader: "No, if you were at a meeting and were impressed enough you could join there and then."
Visitor: "What about the ideas I might have - I could be a racist say?"
Leader: "That could be sorted out later in the branch, at education meetings and whilst you're selling papers."
Visitor: "Obviously I wouldn't be allowed to represent the SWP or be allowed full access to the party until you were satsified about my ideas."
Leader: "That's right."
Visitor: "If I've got you right that means that you have two types of members: those with power in the party and those without. That doesn't sound much like democracy to me."
Leader: Long pause.

The visitor has attended all our meetings since but remains convinced by the argument put by the SWP. Leadership makes you stupid.
R
Posted by Imposs1904 at 8:49 AM No comments: 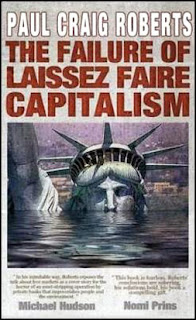 Paul Craig Roberts is of interest as he is a former Assistant Secretary to the US Treasury under Reagan and an erstwhile columnist for the Wall Street Journal who has written an excoriating attack on free-market economics in this book. In particular, he criticises financial deregulation and ‘offshoring’ of jobs and says these are part of what is effectively a conspiracy by the elites in the US and other Western countries to ensure an increasing amount of wealth goes to the very rich and ever less to everyone else. At one point he claims:

‘The United States is the first country in modern history to destroy the prospects and living standards of its labor force in order to enrich the top 1% of the income distribution. Once a land of opportunity, America is being polarised by globalism into rich and poor’ (p.117).

But there is of course a problem with this viewpoint, and one he does not address. America (like all other capitalist countries) has always been characterised by massive income inequality whereby the people who own and control the means of living receive colossal incomes that bear no relation to the effort (if any) they have made, while the vast majority are exploited to keep them in their positions of privilege and power. Reading this book, anyone would think that it is only since the Clinton administration onwards that these things have been a noticeable feature of life.

In fairness, one of the more positive aspects of this book is that there are a number of interesting facts and statistics presented at various stages to support aspects of his case, including on the real nature of employment and unemployment in the US. For instance, Roberts claims the real unemployment figure is nearer 23 percent than the ‘official’ 7.5 percent. There are also interesting statistics on changes in the US labour markets and on the stagnation of real wages there.

However, real wages for large numbers of US workers have been stagnant or declining from as far back as the early 1970s and this was never fundamentally addressed or reversed by the Reagan administration of which Roberts was a part. Indeed, Roberts seems very coy about Reagan and ‘Reaganomics’ and tries to argue that the growth of laissez faire capitalism has only happened in comparatively recent times as a product of ‘globalisation’. To do this, he engages in some historical sleight-of-hand about Reagan’s supply-side economic policies, claiming that these were really about reforming the US tax system to give incentives to entrepreneurs and workers. But of course they were about far more than this – including attacks on the trade unions to ensure labour flexibility and mobility so as to reduce costs of production. Indeed, some of the very things Roberts now seems to be railing against here.

The fundamental weakness of this book though lies in the lack of solutions proffered. ‘Steady-state’ growth is lauded but there is no serious suggestion about how this can be achieved within capitalism. The most obvious soft-spots Roberts has are for national sovereignty and protectionism, yet he glides over the likely disastrous effects of the latter, which we have of course seen before, and which infamously led to the exacerbation of the economic depression of the 1930s and provoked the subsequent bloodbath of World War Two.

What Roberts has failed to realise is that capitalism has increasingly – over a period of many decades – become a truly global, interconnected system that operates according to its inherent, underlying economic laws. These are impersonal and driven by profit and the competitive accumulation of capital. Furthermore, this proverbial genie of globalised capital is out of the bottle and campaigners for national sovereignty, protectionism and the rest are never going to be able to squeeze it back in again.
Dave Perrin