Exhibition Review from the May 1961 issue of the Socialist Standard

At the Victoria and Albert Museum in April there was to be seen an Exhibition, Morris & Company 1861—1940. On show were specimens of textiles, tapestries, wall papers, etc., produced by the firm of which William Morris was chief partner and designer. These art and craft products are considered to be the most artistic of their period. But such fine work was not for the homes of the great multitude, as Exhibit 61 (an order book) quite clearly showed.

Looking at this exhibition there was nothing to indicate that for the last 13 years of Morris’ life be worked full speed in the Socialist movement of his day as shown in these words in his essay How I became a Socialist (1894). “But the consciousness of revolution stirring amidst our hateful society prevented me, luckier than many others of artistic perceptions, from crystallizing into a mere railer against ‘progress’ on the one hand, and on the other from wasting time and energy in any of the numerous schemes by which the quasi-artistic of the middle classes hope to make art grow when it has no longer any roots, and thus I became a practical Socialist.”

These words from the chief partner and designer of the Morris firm indicate that under capitalism “Art for the People” is just a phrase but that under Socialism where goods will be produced for use and not for profit Art will be a part of daily life and work in such ways as a free people living in a democratically owned and controlled society wish.

Morris wrote a number of essays and gave lectures on Art and Socialism. Our pamphlet No. 3 Art, Labour & Socialism was a clear statement on the subject and it is possible that before long we may republish it, it having been out of print for many years now.
Ted Kersley
Posted by Imposs1904 at 7:39 AM 1 comment:

A quote from the May 1961 issue of the Socialist Standard

Unless something or other is done to give all men some pleasure for the eyes and rest for the mind in the aspect of their own and their neighbours’ houses, until the contrast is less disgraceful between the fields where beasts live and the streets where men live, I suppose the practice of the arts must be mainly kept in the hands of a few highly cultivated men, who can go often to beautiful places, whose education enables them, in the contemplation of the past glories of the world, to shut out from their view the everyday squalors that most men move in. Sirs, I believe that art has such sympathy with cheerful freedom, openheartedness and reality, so much she sickens under selfishness and luxury, that she will not live thus isolated and exclusive. I will go further than this and say that on such terms I do not wish her to live. I protest that it would be a shame to an honest artist to enjoy what he had huddled up to himself of such art, as it would be for a rich man to sit and eat dainty food amongst starving soldiers in a beleagured fort.

I do not want art for a few, any more than education for a few, or freedom for a few.

From "The Lesser Arts," first given as a lecture in 1877, and included in "William Morris —Selected Writings.” (Nonesuch Press.)
Posted by Imposs1904 at 7:28 AM No comments: 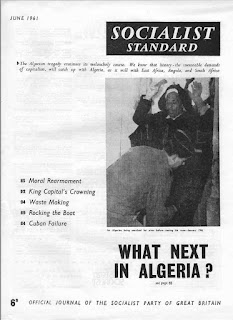 Editorial from the June 1961 issue of the Socialist Standard

The Algerian tragedy continues its melancholy course. Rising to high drama at one moment, it topples over into anti-climax and something often close to farce the next.

We are still too near to the event to know the full story of the “four days” last April. In fact, it is likely that we shall never know, so complex are its ramifications, so inextricably is it caught up in a web of intrigue, treachery, and fanaticism, so overlaid with high-sounding idealism and underlaid with the basest self-seeking.

Regardless of speculation de Gaulle proceeds at full speed to implement the plans he has been working towards ever since he came to power in 1958. The Army has played into his hands, its morale and self-confidence shattered, at least for the moment. The way has been left wide open to the objective he has sworn to achieve before he dies—the "decolonisation” (he uses the word as though he was talking of getting rid of a disease) of France. But he will need to move fast.

Wiser to the ways of the world of modern capitalism and more far-seeing than many of the ruling-class he represents, he sees the march of events and where they are leading. He knows that no Power in the modern world can hold on to its possessions according to the old imperialist traditions of the past. In the three years of his administration almost the whole of the former French empire has been granted independence. Of the former important territories of that empire, only Algeria remains. And, says de Gaulle, with that characteristically withering turn of phrase, devoid alike of delusion and sentiment, "l'Algerie de Papa est morte" — "Daddy's Algeria is dead"!

Daddy’s Algeria may well be dead, but nobody knows what the new one will be like. De Gaulle is staking all on an independent Algeria still within the orbit and influence of French capitalism, as he has successfully achieved with the great majority of the other former French territories. What is supremely important now for the French ruling-class is to retain their control over the Saharan oilfields and the vast deposits of natural gas. not to speak of the mineral wealth they also hope to discover in the future.

That is the hope. But there are many perils and possible pitfalls ahead. Nobody can say what the talks at Evian between the French and the F.L.N. will bring. Nobody knows what the European settlers will do, particularly the fanatics among than — there is already evidence that these latter are prepared to go to any lengths to frustrate de Gaulle’s plans. Nor does anybody have any real idea of what is in the minds of the leaders of the F.L.N.. preoccupied for seven years in fighting a bitter war and now faced with sitting round a conference table. There is still a terrible possibility that the next news to come out of Algeria will be of carnage and devastation as to make even the last seven years of its sufferings only a prelude in comparison.

We know that history, by which we mean in this case the inexorable demands of capitalism, will catch up with Algeria, as it will with East Africa. Angola, and South Africa.

But what a terrible price it will have exacted in human suffering by the time it does so.