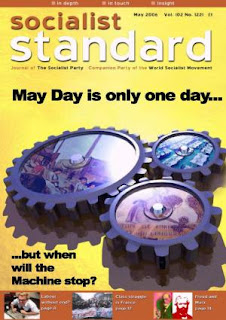 From the May 2006 issue of the Socialist Standard

I first encountered the Socialist Party in a South Wales valley town. It was late 1972, and I was at a loose end politically. Years before, I had flirted with the Communist Party, to the outrage of my parents, despite my maternal grandparents having been CP supporters from the time of the Russian Revolution.

I used to read Soviet Weekly, and a lavishly illustrated magazine sent to me direct from Moscow, Soviet Union, full of happy smiling Russian workers on their way to exceeding the norms of the latest Five Year Plan. Nothing about Stalin having murdered thirty million or so of his own people. Nothing about the string of slave labour camps dotted around the Arctic Circle, Solzhenitsyn’s Gulag Archipelago, where political dissidents ended up.

What cured me of Bolshevism was the outbreak of the Hungarian uprising in 1956. My family possessed one of the few televisions in our street in those days. Here was film, direct from Budapest, of Russian tanks slaughtering Hungarian workers, whose only offence was to try to shake off Soviet tyranny. I wrote a blistering letter to Soviet Weekly but, of course, I never got a reply. One of the maxims of capitalist society is obviously ‘when faced with the truth, ignore it.’

For the next sixteen years, except for one brief episode, I was more or less in the political wilderness. My father was a lifelong member of the NUM and its local predecessor, the South Wales Miners’ Federation, the “Fed” whose subs had to be paid in secret, lest you ended up on the colliery owner’s blacklist, then being unable to get a job in any colliery in the valley. Dad was an admirer of Aneurin Bevan, the Labour Health Minister, a former miner himself, and MP for a local constituency, Ebbw Vale. Bevan’s stock went even higher in our house when he described the Conservatives as “lower than vermin”.

The watershed came in 1964. For the first time since 1951 a Labour government was elected. But it didn’t turn out to be the promised land that some had thought. Far from it. Labour proved itself incapable of solving the intractable issues of capitalism, unemployment, poverty, homelessness, warfare and a host of other working class problems too.

Somewhere between 1964 and 1972, still looking for an alternative to capitalism, I joined Plaid Cymru, the Welsh nationalist party. Out of the frying pan into the fire! Some forty years later there are only one or two aspects of their policies I can recollect. They regarded themselves as a socialist party, by which they meant state capitalism, and they had the curious belief that the little countries of Europe were all doing better than the larger ones, as if capitalism was particularly considerate in this respect. Of course, it was twaddle. What Plaid didn’t say was that in an independent Wales, the situation of the worker would be no different from in a larger political unit, i.e. they would have only their ability to work to sell, and so would be shut out from the wealth of society, which would be appropriated by a Welsh capitalist class. For the worker, nationalism is a total waste of time.

And so to 1972. On a November day I picked up a copy of the Socialist Standard in the local library. It came like a political thunderbolt. Here were ideas I had never encountered before. Free access to the wealth of society. Production for use. The workers have no country. Abolition of money. No more governments, no more states, no more frontiers, no armies, no war.

For the first time in my life, I felt politically free.
Greenie
Posted by Imposs1904 at 11:59 AM No comments: