Hours after flying on a rickety 19-seater propeller plane and landing on a dirt strip, you get to the village of San Buenaventura in the heart of the Bolivian Amazon.

Here, in a simple one-storey brick house next to a row of wooden shacks, is the home of Antonio Garcia Baron. 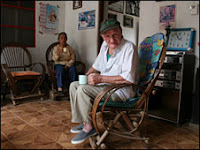 He is the only survivor still alive of the anarchist Durruti column which held Francoist forces at bay in Madrid during the Spanish Civil War (1936-1939) and the founder of an anarchist community in the heart of the jungle.

Mr Baron, 87, was wearing a hat and heavy dark glasses. He later explained that they were to protect his eyes, which were damaged when he drank a cup of coffee containing poison nine years ago.

It was, he said, the last of more than 100 attempts on his life, which began in Paris, where he moved in 1945 after five years in the Mauthausen Nazi concentration camp, and continued in Bolivia, his home since the early 1950s.

He was keen to share his views on 20th Century Spanish history with a wider audience. 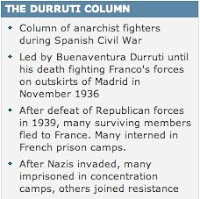 "The Spanish press has covered up that the (Catholic) Church masterminded the death of two million Republicans during the civil war, not one million as they maintain," Mr Baron said before launching into one of his many anecdotes.

"I told Himmler (the head of the Nazi SS) when he visited the Mauthausen quarry on 27 April, 1941, what a great couple the (Nazis) made with the Church.

"He replied that it was true, but that after the war I would see all the cardinals with the Pope marching there, pointing at the chimney of the crematorium."

On the walls of Mr Baron's house is a picture of him taken in the camp. Next to it is a blue triangle with the number 3422 and letter S inside, marking the prisoners considered stateless.

"Spain took away my nationality when I entered Mauthausen, they wanted the Nazis to exterminate us in silence. The Spanish government has offered to return my nationality but why should I request something that was stolen from me and 150,000 others?" he said angrily.

Mr Baron arrived in Bolivia on the advice of his friend, the French anarchist writer Gaston Leval.

"I asked him for a sparsely populated place, without services like water and electricity, where people lived like 100 years ago - because where you have civilisation you'll find priests."

Some 400 people, mostly Guarani Indians, lived there at the time, but in fact also a German priest.

"He was a tough nut to crack. He learnt of my arrival and told everyone that I was a criminal. They fled and made the sign of the cross whenever they saw me, but two months later I started speaking and they realised I was a good person, so it backfired on him."

Convinced that the priest still spied on him, a few years later he decided to leave and create a mini-anarchist state in the middle of the jungle, 60km (37 miles) and three hours by boat from San Buenaventura along the Quiquibey River.

With him was his Bolivian wife Irma, now 71.

They raised chicken, ducks and pigs and grew corn and rice which they took twice a year to the village in exchange for other products, always rejecting money.

Life was tough and a few years ago Mr Baron lost his right hand while hunting a jaguar.

For the first five years, until they began having children, they were alone. Later a group of some 30 nomadic Indians arrived and decided to stay, hunting and fishing for a living, also never using money.

"We enjoyed freedom in all of its senses, no-one asked us for anything or told us not to do this or that," he recounted as his wife smiled, sitting in a chair at the back of the room.

Recently they moved back to the village for health reasons and to be closer to their children. They live with a daughter, 47, while their other three children, Violeta, 52, Iris, 31, and 27-year-old Marco Antonio work in Spain.

They also share the few simple rooms arranged around an internal patio with three Cuban doctors who are part of a contingent sent to help provide medical care in Bolivia.

The hours passed and it was time to take the small plane back to La Paz before the torrential rain isolated the area again.

Only then, as time was running out, did Mr Baron begin speaking in detail about Mauthausen and the war - as if wishing to fulfil a promise to fallen comrades.

How the Nazis threw prisoners from a cliff, how some of them clung to the mesh wire to avoid their inevitable death, how the Jews were targeted for harsh treatment and did not survive long.

His memory also took him to Dunkirk where he had arrived in 1940, before he was caught and imprisoned in Mauthausen.

"I arrived in the morning but the British fleet was some 6km from the coast. I asked a young English soldier if it would return.

"I saw that he was eating with a spoon in one hand and firing an anti-aircraft gun with the other," he laughed.

"'Eat if you wish', I told him. 'Do you know how to use it?' he asked since I didn't have military uniform and was very young.

"'Don't worry,' I said. I grabbed the gun and shot down two planes. He was dumbstruck.

"I'll never forget the determination of the British fighting stranded on the beach."