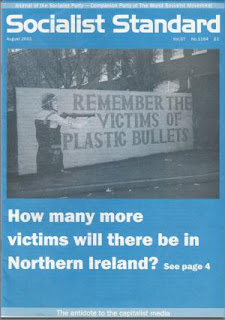 From the August 2001 issue of the Socialist Standard

The final pages of Engels's pamphlet, Socialism: Utopian and Scientific, project a future for human kind that is bursting with optimism. Written in 1877, it foresees a time in socialism when all the economic constraints on our human powers will have been finally thrown off and we shall at last be free to relate to each other in a truly human way. Some of the language may now seem dated, for example, depicting “man” as the conscious “lord of Nature”. Nevertheless, his ideas were eloquently expressed and inspiring:


“Man's own social organisation, hitherto confronting him as a necessity imposed by Nature and history, now becomes the result of his own free action. Only from that time will man himself, more and more consciously, make his own history . . . It is the ascent of man from the kingdom of necessity to the kingdom of freedom.”

Engels summarised the development of the powers of production and the changes in social relationships which accompanied it. He was in no doubt that the productive powers, in 1877, were sufficient to make socialism a possibility:


“The possibility of securing for every member of society, by means of socialised production (socialism), an existence not only sufficient materially, and becoming day by day more full, but an existence guaranteeing to all the free development and exercise of their physical and mental faculties – this possibility is now for the first time here, but it is here.”

This was expressed with great confidence but could it be that the optimism of Engels's outlook had led him to some exaggeration?

Since then, beyond even the wildest dreams of Engels, productive powers have further expanded but these are still only in proportion with the capacity of markets for the sales of goods. Market capacity is always much less than the amount that would be required for needs. This means that to solve the desperate problems of poverty and to raise the living standards of every person throughout the world, even taking into account the elimination of waste, people in socialism would have to increase means of production of every kind together with goods for consumption.

There could, of course, be no such thing as absolute freedom from necessity. More than most Engels recognised that the work of providing for needs is an eternal nature-imposed necessity and is basic to all forms of society. What Engels was talking about was freedom from the necessity to submit to the way the profit system is organised. Workers need money to live and can only do so by selling their working skills to an employer. This compels workers to submit to the work arrangements which are dictated by the capitalist system.

This is the capitalist division of labour. It does not arise primarily from the needs of people, it is determined by the drive for profit and capital accumulation. It does not work in the interests of producers, it works in the interests of the privileged minority who own and control the means of life. It does, of course, include the production of useful goods and services for consumption. All societies must do this; it happened even under slavery and feudalism. But in the modern system of wage slavery, although a precise figure would be difficult to assess, we can say that at least half the number of people who work for wages or salaries do jobs that have got nothing to do with real human needs.

In fact, in this mad system, many millions of people in armaments industries throughout the world are producing the means of killing other human beings whilst more millions in armies and other military services, are trained and prepared to use these weapons. In the wars and civil strife of the 20th century, all caused by the state rivalries and other conflicts of the capitalist system, more people killed each other than during any previous century. This required allocations of labour and materials on a vast scale. It was humanity in a prolonged mode of self-destruct with the division of labour organised as a gigantic death machine.

Otherwise, many jobs required by the capitalist division of labour are boring and meaningless. The list is long and includes the hours spent every day by workers at the checkout tills in supermarkets. The work of millions of people in insurance, finance and banking administer corporate accounts, interest, invoices, costings, contracts, wage accounts, all mostly involved with the movement of money. Many of these jobs are well paid, providing perhaps for a bigger mortgage, and thus strengthening the bonds that tie the employee to the corporation.

Within factories the technical division of labour splits up the work process into detailed parts that are worked in repetition, sometimes at a speed governed by the production line. This de-humanises work by reducing the men and women doing it to extensions of the machine.

Because the capitalist division of labour works as an extended system of exploitation each production unit or office is run according to the disciplines of corporate authority with the employer having the power of dismissal. It is fraught with stress and insecurity. Having control, and as a strategy for maximising its profits, a company may decide to switch production to a different location or a downturn in the market may cause shut down. In either case workers may be dismissed in great numbers.

Breaking the shackles
It was against this oppressive state of things that in 1877 Engels's looked forward to a society shaped by the free actions of all people. The difference now is that is that the capitalist system has spread across the world with a division of labour that has dissipated the gains in technology throughout new fields of waste, pollution and the death-producing industries of the military. This has intensified the contradiction between the potentially liberating powers of useful production and the way it remains shackled to the objectives of capitalism.

But these shackles would be so easy to break. We are now in a time when throughout the world people could share an abundance of energy, skill and creative talent but it is only in socialism that these could flourish in freedom and co-operation. With common ownership, to begin with, these resources would be concentrated on sorting out the mess left by capitalist society, to stop pollution, to make sure everyone was well fed and well housed with good medical services and the means of enjoying life. This means that in working for these objectives socialism would be bound to expand useful production and this will require a division of labour given by the available technology and materials. This will be determined by practical necessity and there can be no guarantee that some jobs will not be boring. But with no economic pressures on work arrangements and every means of increasing automated methods, such jobs would be reduced to a minimum or shared out.

But even if some of the work may be routine it will never be meaningless. It will always serve needs or be part of progress in solving problems. Work itself is an important need and is most rewarding when done in co-operation with others and when it is in the interests of those doing it This places less emphasis on what work does and more on the relationships within which it is done. In socialism it would result from a freedom to choose how to live, to decide what the priorities of action should be and an ability to organise production so as to achieve these objectives. But this is denied by the oppressive forces that determine the capitalist division of labour.

Instead of the pressures that force people to sell their working skills to an employer, people in socialism will work as a voluntary expression of their relationship with others. Needs will replace the drive for profits and the dictates of the market in deciding what must be done. Instead of the authoritarian control imposed by boards of directors and their corporate managers, production units will be run democratically by the people working in them. Instead of the state and its government of people, in socialism, people will contribute to the policy decisions made democratically by the community and their work will be a response to those decisions.

In 1877 Engels set out this great challenge – the need to build a new society that would combine the knowledge and the productive powers that had been achieved in his day with all the best qualities of co-operation. For too long the challenge has been neglected and the consequences of not taking it up have been tragic and immense.
Pieter Lawrence
Posted by Imposs1904 at 1:18 AM No comments:

Sarah Glynn, ed: Where the Other Half Lives: Lower Income Housing in a Neoliberal World. Pluto Press

Social housing (also known by various other names, especially council housing) has generally been aimed at workers on below-average incomes, though its extent has varied from country to country. This book studies the effects on social housing of the implementation of ‘neoliberal’ policies, which involve the partial dismantling of the welfare state and of Keynesian government initiatives. Its particular strength is its coverage of developments in a number of countries.
In the UK the 1890 Housing Act made it easier for local authorities to build and manage houses, though these were still expected to make a profit. A further act of 1919 allowed for government subsidies but was seen as a temporary measure in the immediate post-war period. It was not until the mid-twenties that a major programme of building council houses began. Social housing has generally been regarded as subordinate to the private sector, and as too expensive for the very poorest, who were forced into privately-rented slums. Housing associations may have started as self-help organisations, but are now just part of the whole housing industry.

Social housing has been more widespread in Scotland than in England, and once housed over half the population. Stock transfers and demolitions, however, have drastically reduced this figure. A chapter on the recent situation in Dundee notes that only one-fifth of houses there are currently council-owned, there is a backlog of over six thousand homes, and only two hundred new council homes are built each year.

The proportion of home ownership in France is considerably lower than in Britain. In 2008, more than one million French people were classed as homeless and over two million as poorly housed, with six million at risk of losing their homes for one reason or another. As might be expected, the US has never had more than a marginal role for social housing. Under neoliberalism, even this has been scaled back, with houses demolished and tenants given vouchers that can be accepted by private landlords, but inevitably private rents are driven up and people are forced to live further out in cities.
Of course there have been various forms of resistance, such as rent strikes and the tent cities set up in Paris and other French towns. Sadly, these can do little to alter the fact that under capitalism, whatever the role of social housing and the state, decent and secure housing is unavailable to large numbers of workers. Neither Keynesian nor neoliberal policies can deliver good-quality affordable homes. And a lot of council housing is shoddy and badly-designed.

In our review copy one batch of pages was bound upside-down. Possibly an unintended comment on the topsy-turvy priorities of housing under capitalism.
Paul Bennett
Posted by Imposs1904 at 12:45 AM No comments: