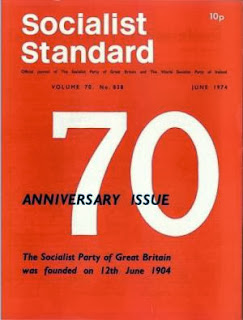 From the June 1974 issue of the Socialist Standard

"A man who could have made his fortune in the halls" - "Manchester Guardian" reporting a Party speaker at Trafalgar Square.

The Socialist Party has always been renowned for its quite remarkable speakers. As a political Party wedded to the democratic idea, and "persuasion" of the soundness of its case, it was bound to produce a number of outstanding orators.

Side-by-side with its insistence on propagandist educational methods, went the refusal to countenance any sort of personality cult. The Party was what mattered; "leaders" were OUT. So here was the paradoxical position of, on the one hand, a number of quite exceptionally outstanding characters, while on the other personal grandeur had no place in the Party.

From 1904 onwards, until the great technical revolution, the "mass media" was the outdoor platform—or to use the Americanism, the "soap-box". In this, the Socialist Party was no different from the others claiming to be Socialist. The most notorious Labour politicians, in their day, were all soap-boxers. For years, many of them, George Lansbury (who was an ex-SDF paid propagandist), Jack Jones, Herbert Morrison, Tom Mann, John McLean, John Burns and scores of others, continued their regular street-corner meetings. It was the usual thing for any energetic young ILPer or member of the BSP to mount the street-corner platform. The main activity was the "meeting". 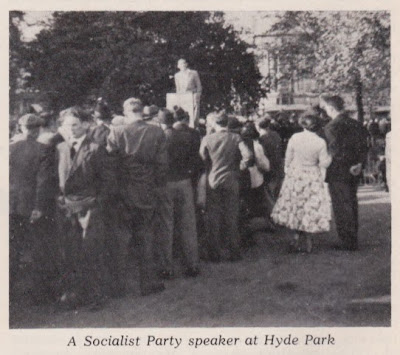 Despite its frequently much smaller membership the Socialist Party could and did, meet the pseudo-Socialists here on level terms. When all the public parks had three or four meetings running, the SPGB took its chance with the others, and the best man won—the biggest audience. In the school of fierce competition and deadly debate were trained some of the most brilliant exponents ever to hold audiences in sway.

The chief fascination of the public meeting was controversy. This it was which attracted thousands to all the local meeting spots. To hear Adolph Kohn, Alex Anderson, Moses Baritz, Charlie Lestor, Groves, Turner and others reduce Labourites, Leninists, Anarchists, Liberals, and religionists to stuttering impotence was sheer mirth-provoking delight.

Since the Party definitely encouraged "heckling" and offered its platform to all opponents, victims were always forthcoming. It was the very success of the Party in demolishing opponents which instigated the decision by the Communist Party to forbid debates with the SPGB. No Party in this country suffered a more devastating attack from the SP than the CPGB.

They were easy meat. One recalls the packed meeting in St. George's Town Hall, Stepney. The entire East London CP there in force, our speaker Adolph Kohn. The local CP organiser requests a (loaded) question.

Or Kohn's classic reply to the Hyde Park heckler shouting:

"Tell us when this 'ere Revolution is going to happen then?"
Kohn: "Next Tuesday afternoon at 2.30. Leave your address and we'll send you a post-card."

During the Second World War, events were relatively favourable to the Party. One platform alone stood in all its solitary glory in Hyde Park on September 3rd 1939—the Socialist Party. The scene, and the impression it made, were described in an article in the magazine Clubman in 1955.

And from that day on, week in, week out, the Socialist Party doggedly held its ground, against all the threats of assault and violence; against charges of "being in the pay of Hitler". "stabbing our boys in the back", etc. etc. As the war dragged on, the audience grew.  "I'm fighting for the likes of a little yellow-bellied bastard like you," yells a fat uniformed Sergeant-Major on leave. "Then you have my permission to stop now," smiles Turner sweetly. Collapse of heckler.

Events dictated that eventually workers would leave other Parties and join the SP. Among them those who had been prominent in the CP. Week after week, fanatical Communists would shriek:

"YES! but have you been in Russia?!"
Speaker: "No! I haven't been in Australia either."
Heckler: "There you are then!"

Came the day when the same taunt was hurled at a new speaker who replied:

"YES! I lived in Moscow for many years as an official of the YCL."
Same Communist heckler: "What bloody difference does that make then?"

Who can forget the Conway Hall in London? The occasion, a debate between the SPGB and Mrs. (now Lady) Barbara Wootton. Packed to the doors—the record of that debate on "Federal Union" in pamphlet form speaks for itself. Or Shoreditch Town Hall packed, hanging on the chandeliers; Cliff Groves playing with Sir Waldron Smithers, who told Groves he would pray for him. Groves objected to him preying on him.

"It's all very well the SPGB saying that Pacifists are impotent. I'm the only pacifist in this country who got a month's solitary for striking a sergeant over the head with a chamber-pot."

Or the post-war election campaigns where the opponents trembled at the thought of a Party speaker.

Traffic and television have changed all this. Politics has been plonked right inside the sitting room. A new generation has grown up in ignorance of the old heroic days, Phone-ins, quizzes, TV and radio have replaced the simple, direct, elemental, personal approach.

Who are we to deplore change—we are revolutionaries! Change is our business! Eventually we, too, will win our way to the media. One of the reasons for the high quality of our propaganda is the wise insistence that nobody shall publicly without satisfying the members that he knows—the speakers' test. A fault of our modern propaganda is the inability to answer questions concisely—like Kohn, with one word. The wit was devastating.

Despite traffic and television, public speaking will always be the Party's most valuable activity. Every member who masters it acquires a new dimension. The man (or woman) who knows, who speaks clearly and simply, will always attract and  convince.

On our 70th Anniversary we salute the orators of the past, resolving to carry on their work until its aim is achieved.
Horatio 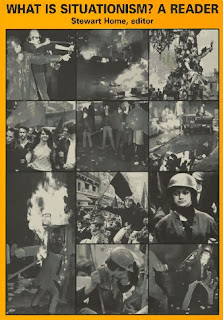 Book Review from the July 1996 issue of the Socialist Standard

This is an occasionally interesting though somewhat repetitive collection of writings about the strand of revolutionary opinion which emerged out of Lettrist and other avant-garde artistic groups, principally in France in the 1950s. With their radical critique of bourgeois consumer society the situationists influenced to a greater or lesser degree both the May events in France of 198 and then, nearly a decade later, the punk rock movement.

Famously, in 1966, a group of situationist-inspired students at Strasbourg University were elected to positions of responsibility in the moribund Students' Union and immediately set up a Society For The Rehabilitation of Karl Marx. They also published various radical tracts including Khayati's On The Poverty of Student Life using unions funds, for which they attracted public outrage and eventually the attention of the police. At their trial the judge summed up situationist philosophy as well as anyone had hitherto ever done, stating "these cynics do not hesitate to commend theft, the destruction of scholarship, the abolition of work, total subversion, and a world-wide proletarian revolution with 'unlicensed pleasure' as its only goal".

Though lacking a coherent revolutionary strategy, the situationists stood out clearly against the market economy, commodity production and wage labour, advocating the creation of a socialist society of common ownership where production would be undertaken solely to satisfy needs and desires. This book doesn't explore this concept as well as it might do, however, and nothing is as well-rounded as Mark Shipway's presentation of the subject in the book Non-Market Socialism edited by Rubel and Crump. Probably the best chapter in this collection of writings is "The End of Music" by Dave and Stuart Wise, dealing with Malcolm McLaren's Sex Pistols, the rise and fall of punk rock and its relationship with situationist politics—the other writings range from the quirky (Jim Martin on Wilhelm Reich and situationism) to the near pretentious (Jean Barrot's text being the most obvious example). This said, there are far worse books around that you could add to a collection on radical politics.
DAP
Posted by Imposs1904 at 12:13 PM No comments: